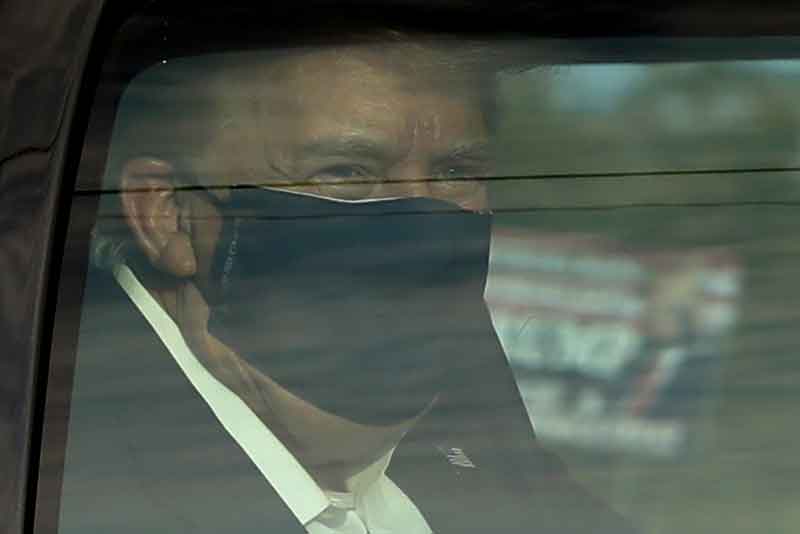 President Trump's infection with COVID-19 adds to a year no fiction writer could have contrived. The image of Trump last Friday walking out of the White House wearing a mask and traveling by helicopter to Walter Reed National Military Medical Center was an optic we have not seen with this president, and it was sobering.

Trump usually makes remarks to the press, but this time he gave no more than a thumbs-up. Before departing he tweeted a brief video thanking Americans for their support. His departure Monday night from Walter Reed will likely bring attacks from his opponents and most of the media that he is putting himself and others at risk, though his doctors assure the public that facilities at the White House are more than adequate to continue his treatment.

Will this experience produce changes in his campaign? More importantly, will it inject a dose of humility into his personae?

It will necessarily curtail his personal appearances for a time. How long and whether it alters plans for a second debate depends on his progress. It may also bring some sympathy to him if he responds in a way that encourages mask wearing and other practices that have shown to be effective in warding off the coronavirus.

A Wall Street Journal editorial had it right: "The shame is that America's media have peddled the fiction that every new COVID case represents a failure of policy. Their line now is that Mr. Trump's infection is karma because he didn't take the disease seriously enough. In remarks Friday, Joe Biden also came close to indulging the karma explanation, while disclaiming partisanship."

If he recovers — and everyone with an ounce of goodwill for a fellow human being should hope he does — he should not engage in triumphalism, as if he is Superman, but deliver a nationally televised address saying what he has learned from the experience and what the country can also learn.

The first lesson is that no one is guaranteed complete immunity from the virus. Democrats and foreign leaders have been infected, too. Wearing masks, frequent handwashing and practicing social distancing does help. It is why the number of daily cases is declining in a few places (although in the past few days some states are reporting slight upticks in new cases and hospital admissions).

The president might also appeal to former Vice President Joe Biden, who properly pulled Trump attack ads last Friday afternoon, following the White House announcement, to take the virus off the table as a campaign issue and stop the blame game, though CBS News reports, "It may take a little time to pull all of the ads down." It would be a rare moment of cooperation between fellow countrymen.

The second lesson is that Americans have sympathy, even empathy, for people who have overcome challenges. That is at the heart of one of Biden's campaign ads about the death of his first wife and daughter in a car accident. We admire such people. It is part of the American story and in our DNA.

Lesson number three could be the greatest of all. If the president can demonstrate some humility, it might resonate with many people.

There is no greater testimony than the one who can say, "I once was blind, but now I see." It is a story from Scripture found in John 9:25 about a blind man Jesus heals. The man explains to skeptical Pharisees that he doesn't know anything about the Man who healed him; all he knows is that he now has his sight whereas before he didn't.

The president was initially off Twitter and out of public view. He has a chance, if he will seize it, to emerge — if not a different man — than a man who has learned something he can share with others who have gone through what he is experiencing. He would also be able to credibly comfort those who have lost loved ones to the virus, instead of orchestrating photo op antics, like his fast trip outside the hospital on Sunday to thank supporters. This was bad optics and an even worse example.

This should not be seen as a political tactic, though it would have obvious political benefits, but something genuine in a city and in a political climate that is increasingly phony and cynical.

The year 2020 has been filled with numerous surprises. Seeing a "new," or at least a slightly different President Trump emerge triumphantly and humbly from this personal challenge, would be the ultimate October surprise.