The death, debt and debauched Dems 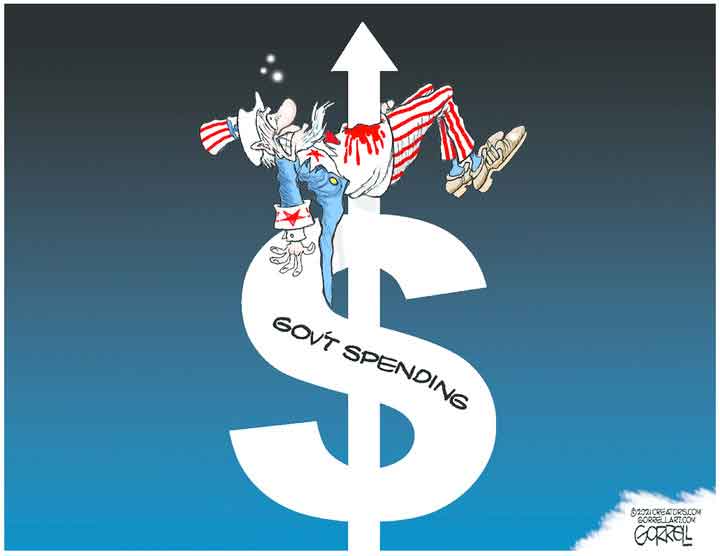 After last week's House vote that saw all but one Democrat, Rep. Henry Cuellar (D-TX), and no Republicans vote for the Women's Health and Protection Act, a bill that would establish a federal right to an abortion, the party that once claimed to stand for "the little guy" — the littlest being the unborn baby — has now hit the trifecta. It has become the party of death, debt, and debauchery. Deception could be added, but that would require changing the metaphor to the Four Horsemen of the Apocalypse.

If the Democrats' multi-trillion-dollar spending bill clears both houses of Congress (at the moment a dubious proposition, but stay tuned), it will increase the national debt past already unsustainable levels. The effect will likely be to addict more people to government and thus bring more votes for Democrats, who will likely warn people not to vote for Republicans, or risk losing their government benefits.

President Biden claims the spending will be "paid for" by raising taxes on "the rich" and corporations, a refrain Democrats have sung for decades, along with the "pay their fair share" lyric. It isn't true. Even if the government imposed a 100 percent tax on the rich and corporations it would not be enough to pay the bill, according to the Manhattan Institute and a number of others who have done the math.

When it comes to deception, just look at what we once called the southern border. It no longer exists. Secretary of the misnamed Department of Homeland Security (DHS), Alejandro Mayorkas, has claimed on several occasions, that "the border is closed." Last Sunday, he acknowledged as many as 12,000 Haitians have been admitted to the U.S. None have been tested for COVID-19, according to DHS.

Why is the Biden administration doing so little about a migration that has become an invasion? Cynics might argue President Biden and his fellow Democrats are importing future voters for the party. Notice they are less hospitable to Cuban migrants, perhaps because, according to Pew Research Center, Cubans are mostly conservative and vote for Republicans, especially in Florida, a critical swing state in presidential elections.

As for debauchery, look no further than the definition of the word: "Excessive indulgence in sensual pleasures; intemperance." How many Democrats are known for legislatively supporting what once were considered traditional values?

Some on the right — and occasionally in the center, such as New York Times columnist Ross Douthat — are already suggesting that the eight-month-old Biden administration is a failure. In his column last Sunday, titled "Can Joe Biden Recover?", Douthat lists just some of Biden's failures as president, including his increasingly obvious lack of clear-headedness, to put it charitably.

Whether he is a failure depends on the definition of that word. It appears to me that Biden and his fellow Democrats in Congress are a raging success as they advance policies that undermine American economic strength, military preparedness, and the destruction of what is left of our moral foundation, a foundation that once defined right and wrong, good and bad, and recognized enemies that want to destroy us from without. Why should they bother when we are doing the job for them from within?