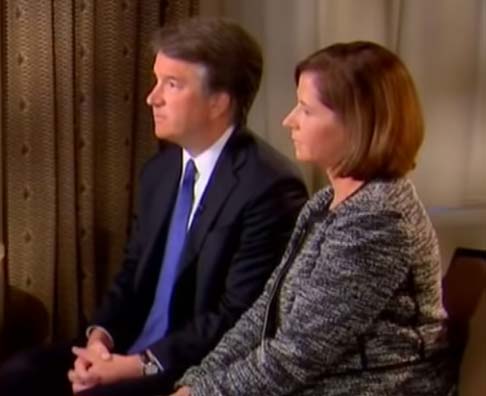 At times Brett and sounded rehearsed and overly cautious in their "exclusive" interview with host Martha McCallum Monday night. repeated verbatim lines about defending his character and allowing the "process" to play out. He said he would not withdraw in the face of unsubstantiated charges against him.

At times their answers seemed coached, but then it is likely that when testifies Thursday before the , she, too, will provide answers that have been well rehearsed.

Some people will find it difficult to believe Kavanaugh's statement that he was a virgin through high school and "long after" college. It is a claim foreign to the "free love" generation. Consider the ridicule football player experienced when he announced he was a virgin saving himself for marriage.

In our age when feelings often matter more than facts, it might have helped the Kavanaughs gain more support had read from the hate mail she has received. The Wall Street Journal obtained some of the messages and published only those that could be quoted in a family newspaper. They were horrible and hateful enough. One said, "May your husband burn in hell." Another instructed her to put a bullet in his head. has received similar messages, even death threats from Trump and Kavanaugh supporters.

Will this horror show never end? People who lament the loss of civility in and in general political conversation need to denounce this process. It has become like a slaughterhouse of candidates for high positions whose worldview might differ from those of the opposition party or persuasion but who, after all, are fellow citizens and deserving of at least a modicum of respect, as well as a polite debate on issues.

Politicians are usually a weak bunch. They tend to cower when challenged. Think of accusation that opponents to his confirmation were engaged in what he called a "high-tech lynching for uppity blacks." His passionate rebuke of the process and his stark calling-out of this country's dark history of systemic racism ultimately saved his nomination.

What will help Kavanaugh's cause in Thursday's hearing is to reach down and find some passion deep in his soul. In the Fox interview, he said he is relying on the public's sense of "fairness" to help him get confirmed. What is happening to him is anything but fair. Kavanaugh might appeal to the Ninth Commandment (or eighth if one is Lutheran or Catholic, as Kavanaugh is). For those who don't remember their Sunday school lessons or no longer attend synagogue, it says: "Thou shalt not bear false witness against thy neighbor."

Critics of this nomination process have suggested that it will deter good people from seeking office. Suppose that is precisely the hope of the left. Their idea of an ideal judge is one who is ruled by the spirit of the age, opinion polls and feelings, not the , a document that is the nation's legal and governmental foundation and has served us well in good and bad times. Too many politicians and judges today regard the as an inconvenience in the pursuit of their goal of social and political transformation.

On Thursday, Kavanaugh can help his case and help preserve the by confronting the slanderous charges against him. This time, though, he needs to throw in some passion.