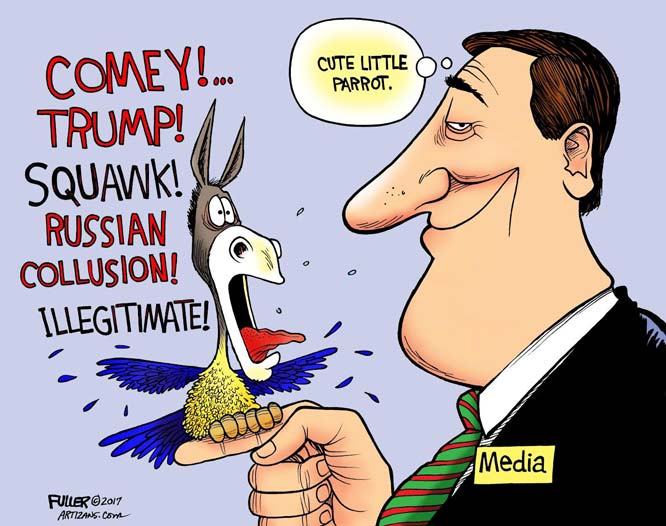 One doesn't have to be a cynic to be cynical about the decision not to hold former Director accountable for what an Inspector General report called his violation of policies and his setting a "dangerous example" in order to "achieve a personally desired outcome."

This pretty much characterizes many of the president's critics, who fully expected to win the 2016 election and have become seemingly deranged in their responses ever since.

Comey reportedly broke several rules for which he will not be prosecuted. He took home memos detailing private meetings he had with the president and then disclosed their contents to a friend who he believed would leak them to . His motivation was to make sure a Special Counsel would be appointed to investigate alleged "collusion" between and the Trump campaign.

The decided not to prosecute Comey, citing a lack of evidence that he "knew and intended to violate laws on handling classified information." As director, how could he not know of these things? Of course he had to know. If you think this mirrors Comey's explanation of why would not be held legally accountable for her mishandling of classified information, you would be right. At the time, Comey said did not "intend to break the law."

Is this the new standard? If it is, the prisons should be emptied because I'm sure every inmate would then claim he or she didn't intend to break the law and therefore should be released.

The Inspector General noted: "By not safeguarding sensitive information obtained during the course of his employment, and by using it to create public pressure for official action, Comey set a dangerous example for the over 35,000 current employee, and the many thousands more former employees, who similarly have access to or knowledge of non-public information."

Taking to Twitter, Comey claimed the IG report vindicates him. That dissembling is reminiscent of some of lies and Hillary's, too.

Rep. (R-OH), the ranking member on the issued a statement: "(Comey's) actions were disgraceful and part of a wider effort within the to undermine ." Who can credibly deny that, though many partisans will.

This isn't over and Comey's actions may yet be used as part of Inspector General continuing investigation (expected to be concluded sometime this month) into whether false information was used to secure a FISA surveillance warrant on , a former Trump campaign adviser. As The reported, "That surveillance was based on the 's suspicions that Page could be an agent of the Russian government. Page, who was never charged with a crime, has denied the accusation and accused the of politically motivated surveillance that violated his civil liberties."

The motivations behind Comey's actions and those in the media who fanned the flames of collusion are now being revealed and should not come as a surprise. If the FISA warrant is shown to have been based on wrong information and the federal judge who issued it is shown to have been lied to, will the liars be prosecuted? They should be, but in the Comey-Clinton "no intention of breaking the law" era, I'm not betting on it.