Not so easy summertime 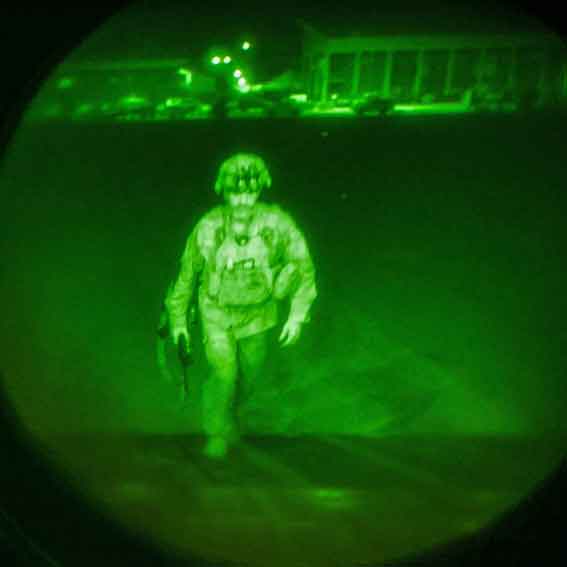 CREDIT: U.S. Central Command handout
There once were summertimes when the living was easy, as the song from the Broadway musical "Porgy and Bess" melodically reminds us. But not this summer, not with COVID-19 still spreading dangerously across the land and uncertainty over what happens next after the withdrawal of U.S. forces from Afghanistan.

Before the entire world became glued to the internet, social media, and summer TV re-runs, many people took the time over the summer months to read books and catch up on things they thought they didn't have time for the other nine months of the year.

Still, despite this summer's flood of "breaking news," I managed time to re-discover a classic book by the English journalist, Paul Johnson. It's titled "Modern Times" and it's more than just a history of the world from the 1920s to the 1980s it's a chronicle of what can happen to a people and their leaders who deliberately ignore history and thus doom themselves to repeat it.

In his chapter on the rise of Hitler in Germany, Johnson writes with profound implications for our day, which many Germans rejected: "The Western liberal notion of freedom of choice and private provision based on high wages (preferring) the paternalistic alternative of compulsory and universal security. The state was nursemaid as well as sergeant-major. It was a towering shadow over the lives of ordinary people and their relationship toward it was one of dependency and docility."

With America's deepening debt and a Democrat president and Democrat Congress desiring to spend more, can it be denied that Americans are increasingly relying on government to take care of them, rather than the once universal value of self-reliance with government as a last resort, not a first resource?

Johnson quotes German sociologist Max Weber from an address in 1919: "The honour of the civil servant is vested in his ability to execute conscientiously the order of superior authorities." Johnson adds Weber believed that "Only the politician had the right and duty to exercise personal responsibility. It would be difficult to conceive of worse advice to offer German mandarins. It was followed, right to the bitter end in 1945."

This history should prove an eternal warning that the power of the state must always be curbed by the people lest it become a functional or actual dictatorship.

Even before Germany was split into East and West to curb its power following World War II, it contained rival geographic interests. German courts and juries tended to favor one half over the other and here Johnson provides a lesson for our own modern times: "Why did juries, representing ordinary middle-class people … tend to side with the Easterners against the Westerners? One chief reason was what they were taught in the schools, which itself reflected the political tone of the universities. The tragedy of modern Germany is an object-lesson in the dangers of allowing academic life to become politicized…"

Carl Schmidt, Germany's leading legal philosopher, argued "order could only be restored when the demands of the state were given over the quest for an illusionary freedom." Such a position was the natural outcome of what was being taught in German schools and universities. Anyone else notice similarities between academic and political institutions in modern America?

Johnson writes of the propensity for even wise and educated people to delude themselves. He recalls a lengthy letter written by Winston Churchill to British Prime Minister Stanley Baldwin in which Churchill said Japan would not present a "menace in our lifetime." The letter was written in December 1924. Seventeen years later he would be proven wrong about Japan, even though his warnings about Germany were shown to be correct.

There is so much more in this 800-page book, including the difficulty of imposing a moral code on people who wish to live immoral lives.

History is not just a collection of old names and dates to be memorized in school. History is full of lessons we never fully learn.