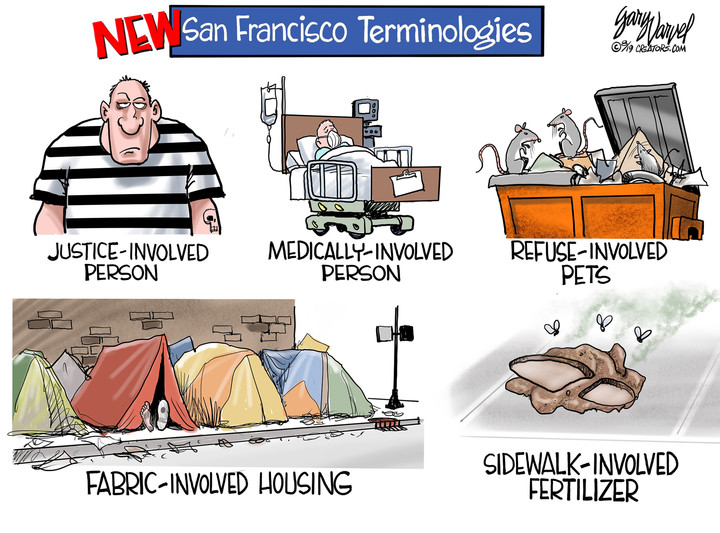 , a city described in song for its natural beauty, is descending into an abyss of homelessness, the use of sidewalks as toilets and a place you might not want to visit, much less live.

The latest, but surely not the last demonstration of insanity, is adoption of new "person first" language guidelines meant to "change the public's perception of criminals." The words "convicted felon," "offender," "convict," "addict" and "juvenile delinquent" are now out. These individuals will henceforth be referred to as a "justice-involved person." Someone previously called a "criminal" will now be referred to as "a returning resident," or "a formerly incarcerated person."

Supervisor told the the intent is to keep people from being "forever labeled for the worst things that they have done. We want them, ultimately to become contributing citizens, and referring to them as felons is like a scarlet letter that they can never get away from."

A noble objective, to be sure, but language has -- or used to have -- a purpose beyond interpersonal communication. Like so much else today, language has now been appropriated to advance political agendas.

The encroachment of euphemisms on common sense is everywhere. Illegal immigrants have become "undocumented workers." Babies in the womb lose their humanity when they are labeled "fetuses."

Euphemisms are most used to hide a more accurate description of behavior or status in order to avoid conflict, or not injure someone who might be offended or hurt. It fails to communicate anything meaningful, while claiming to do so. George Orwell called it "Newspeak," or "doublespeak."

Too often, euphemisms are used to make bad behavior appear good, or at least tolerable, and to allow one to avoid responsibility and accountability. They are interpreted according to one's personal wishes. As Humpty Dumpty told Alice in the Lewis Carroll classic: "When I use a word, it means just what I choose it to mean -- neither more nor less."

The English language once conveyed meaning. Properly written and spoken, it suggested one was educated and capable of conversing in polite company. Today, it is often used to cover up true intentions. Consider how often "racism" is misapplied.

The proper use of language can also be redemptive. That used to be a major goal, along with punishment, of penitentiaries -- the word being derived from "penitent," suggesting the possibility of changing one's life after admitting wrongdoing and repenting so as not to repeat bad behavior. Is anything "bad" today, or has that also become subjective?

In our muddled language and culture, one dare not suggest anyone has done anything wrong lest negative labels be attached to them. Such labels are unevenly applied. The political left often retains them to attack the right, but should the right seek to use words that accurately describe the conduct or status of another they are condemned as old-fashioned, rigid, judgmental, or worse.

"Wardrobe malfunction," has been a recent favorite, a euphemism for showing off what were once considered "private" body parts.

If you are unemployed, you are "between jobs" or a "consultant." "Underserved community" means the politicians aren't getting all the money they want. A corollary: you are no longer poor, you are "economically disadvantaged." The list is endless.

Instead of applying euphemisms, should be seeing to the homeless ("previously housed individuals"?) and the filthy streets that now require maps so people can avoid stepping in human waste.

may have left his heart in , but the city seems to lost its mind there too.