The source of Republican problems 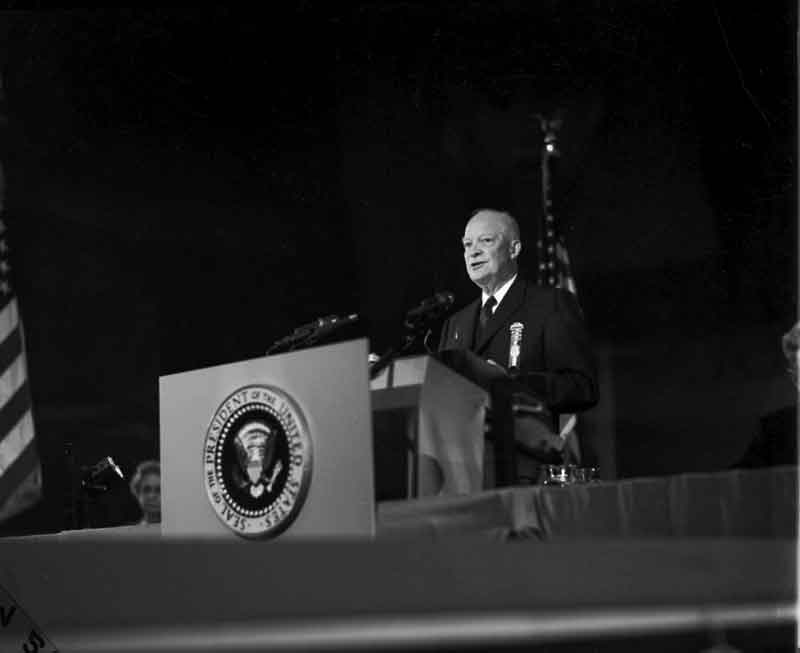 In a new book about her grandfather, Dwight D, Eisenhower, titled 'How Ike Led: The Principles Behind Eisenhower's Biggest Decisions," Susan Eisenhower writes admiringly about Ike's pursuit of what she calls 'the middle way."

In a decision that still infects elements of the Republican Party today, Susan Eisenhower says Ike's pursuit of compromise and centrism led to his decision to nominate Democrats as well as Republicans to the Supreme Court. She quotes Ike's attorney general, Herbert Brownell: 'The President believed and acted upon the belief that the Supreme Court's membership should represent divergent ideological points of view." She says he believed this approach would 'foster public confidence in the court . . ."

Ike could not have foreseen future battles over all federal courts and how his successors would mostly nominate judges who fit their ideological views of the Constitution, Roe vs. Wade being the most egregious of many such examples.

Our 34th president gave the Supreme Court two of its most liberal members, Justices William Brennan and Earl Warren. Ike would later come to lament those appointments, saying, 'I made two mistakes and both of them are sitting on the Supreme Court."

Ike had success with the middle way as supreme allied commander during World War II when his advisers and heads of Allied nations agreed on a common goal, the defeat of Nazi Germany and Japan. Unfortunately, his noble sentiment works less well in politics because Democrats do not reciprocate.

The purpose of politics is to win and to demonstrate one party's ideas and policies are superior to those of the other party. If politics is only about being liked and praised, especially by one's ideological adversaries, the party that adopts such a philosophy is doomed to perpetual defeat and to not have its positions – if it has them – taken seriously.

Democrats have been known since the Great Depression as the party of government, luring more and more voters by dispensing free stuff and promising to take care of them. Government has replaced individual responsibility and accountability. We now subsidize bad individual decisions and failure and penalize those who have succeeded by playing by what used to be called 'the rules."

For many, government has become an addiction with Democrats serving as 'dealers." Republicans have had only marginal success in countering this because they don't seem to be able to come up with a set of unified policies and goals. Instead, the GOP has become like a protein shake dieters drink because it contains fewer calories. In too many cases, Republican positions resemble 'Democrat-lite." The growing debt is only one example. Republicans seek only to manage it, not reduce it.

Susan Eisenhower quotes from a letter Ike wrote to a California friend in 1954: 'I developed a practice which, so far as I know, I have never violated. The practice is to avoid public mention of any name unless it can be done with favorable intent and connotation; reserve all criticism for the private conference; speak only good in public."

In this, Ike demonstrated his good character, but that didn't stop Democrats from criticizing him about everything from the rounds of golf he played to allegations by Harry Truman and others that he was in the pocket of 'reactionaries," which translated into today's parlance means 'extreme right-wingers."

There's a cliché about sports: 'It's not whether you win or lose; it's how you play the game."

In politics it's about winning, and if you don't win how you played the game won't matter.

Texas politician Jim Hightower wrote a book titled 'There's Nothing in the Middle of the Road but Yellow Stripes and Dead Armadillos."