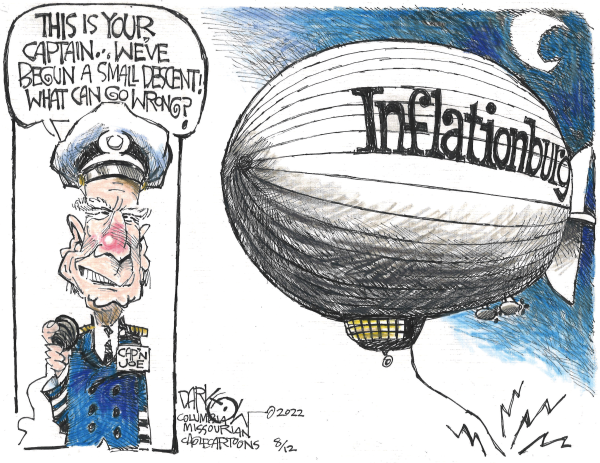 In January 1925, President Calvin Coolidge, addressed the American Society of Newspaper Editors in Washington. In his remarks, Coolidge said, "the chief business of the American people is business. They are profoundly concerned with producing, buying, selling, investing, and prospering in the world."

On Tuesday, President Biden returned from vacation to sign the misnamed "Inflation Reduction Act." He might as well have said in his mischaracterization of the legislation that the chief business of America is now government spending and increased debt.

The new law puts government ahead of business and diminishes the power of the individual in favor of the power of Washington. And it doesn’t do what Biden and Democrats say it will do, particularly on inflation. The Penn Wharton Budget Model, a group of economists and data scientists at the University of Pennsylvania, concludes the law will have no impact when it comes to reducing inflation.

An analysis by the nonpartisan Congressional Budget Office finds that audits of taxpayers making under $400,000 annually will account for about $20 billion in revenue for the Inflation Reduction Act.

Republicans don’t have clean hands when it comes to government spending, a leading cause of inflation. The national debt increased by $7.8 trillion during the Trump administration. The last president to preside over surpluses was Bill Clinton, from 1998 to 2001. Part of that had to do with welfare reform, which resulted from cooperation between Clinton and Speaker Newt Gingrich. Such bipartisanship appears to be long gone.

The federal government is taking in record amounts of revenue, but politicians can’t control themselves when it comes to spending.

There is a certain elitism about this bill, as well as there is with many things that come from Washington. Government now sees itself as the primary provider of life’s necessities. For many it has become a first resource, while in the Coolidge and earlier years it was a last resort. Credit, or blame, Franklin Roosevelt for expanding the role, reach and cost of government. Though some of his programs were necessary during the Depression, the idea of "entitlement" grew. Addictions, whether to substances, or government, are hard to break. Politicians know this, which is why trying to cut even the rate of increased spending for outdated programs is treated like taking away a child’s favorite toy.

I am going to repeat a suggestion I have made before and maybe this time some legislators will pay attention. If Republicans regain control of at least the House of Representatives in November, they should commission an outside firm with no connection to a party or politician to conduct a complete audit of the federal government.

Every program and agency that is not living up to its original purpose and can’t be done better in the private sector should be eliminated. Businesses do this, or something similar. Only government seems to grow without end.

More spending, as in "The Inflation Reduction Act," won’t reduce inflation, any more than drinking more alcohol leads to sobriety. But when Democrats are drunk on spending and power and too many Americans have an entitlement mentality, it doesn’t appear either side is prepared to go cold turkey when it comes to spending.