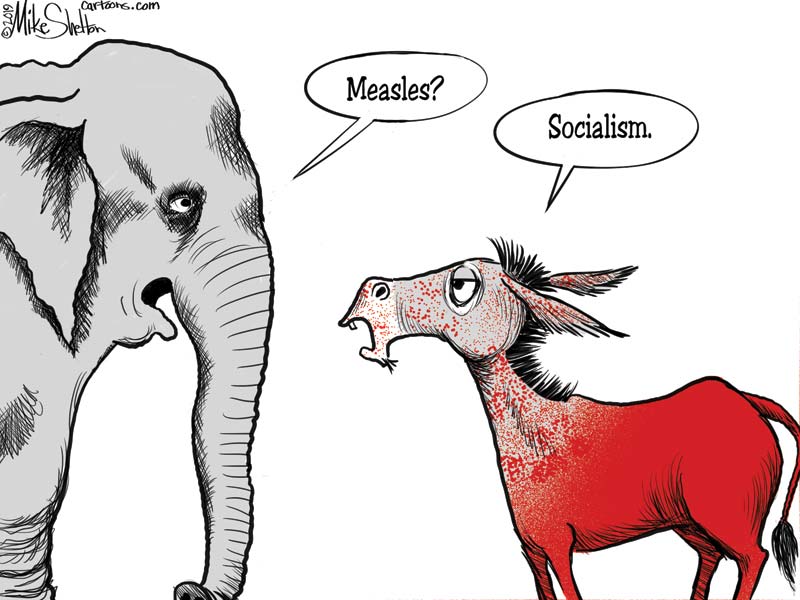 has repeatedly promised, "America will never be a socialist country." Since began expanding government in the 1930s, has increasingly adopted big-state policies associated with socialism.

We may not be at the stage would advocate, but more millennials appear to favor a system under which they have never lived. Free stuff is appealing until one realizes its costs.

In an attempt to reach Generation Z -- those in their teens and 20s -- a new organization is starting this month to combat socialism's appeal.

It's called Young Americans Against Socialism" (yaas.org), according to its site, a nonpartisan nonprofit "dedicated to exposing socialism's failures to young Americans by creating viral educational videos for social media." Its founder, , worries that "more than half of young people believe socialism should be implemented in America." The reason, she says, is because many of them know little about it. Her campaign will be largely on social media where she notes young people spend hours every day.

"Yaas is taking the Left's tactics of injecting emotion into everything," she says, "and throwing it right back in their faces." One Yaas video includes statements by two men. One, , says he escaped by "windsurfing for 10 hours." The other, , a Venezuelan, challenges Sanders' promotion of socialism.

Sanders is shown in a video from the '70s in which he calls food lines in some countries "a good thing," presumably referring to non-socialist countries. "The rich," he claims, "get the food and the poor starve to death." responds, "It wasn't that I was rich; it was because politicians like him destroyed my country."

Armas suggests young people who wear -shirts are ignorant of history and of the number of people Guevara killed during and after the Cuban revolution. Surveys back him up.

In a 2017 opinion column for , cited a 2014 report by the National Assessment of Educational Progress that showed "an abysmal 18 percent of American high school kids were proficient in history. When colleges such as decline to require Western Civilization classes or high schools propose changing their curriculum so that history is taught only from 1877 onward ... it's merely a blip in our news cycle."

Markowicz also noted a 2012 story in Perspectives on by professor , who found that "88 percent of elementary school teachers considered teaching history a low priority."

While the reasons are varied, she says, "VanSledright found that teachers didn't focus on history because students aren't tested on it at the state level. Why teach something you can't test?"

When history is taught, especially at many liberal universities, there is often a bias against America because of slavery and the "invasion" of white Europeans who killed and displaced . Markowicz concluded, "We talk often about how fractured our country has become. That our division increases while school kids are taught less and less about our shared history should come as no surprise."

In her video, Zegers says, "Capitalism has lifted more people out of poverty than any other economic system." Even , though still officially communist and socialist, has had to adopt more of the principles characteristic of capitalism to lift large numbers of people from poverty.

Socialism has long needed pushback in America from those opposed to it. has begun pointing out how harmful it is elsewhere. Zegers hopes to target young Americans with testimonies from people who have lived under the reality of socialism.