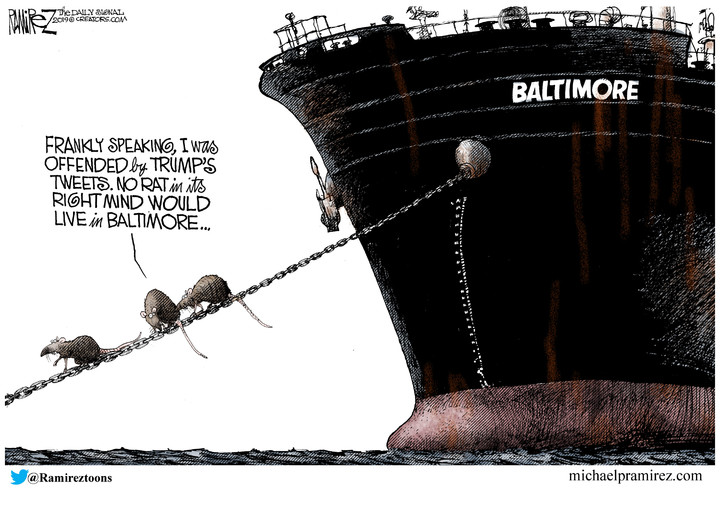 Former governor and Ambassador has urged and Rep. (D-MD) to stop exchanging insults over conditions in .

Haley scolded Trump for his recent tweet that appeared to mock for an attempted break-in at the congressman's home, tweeting "This is so unnecessary." She added, "Instead of all of this back and forth about who everyone thinks is racist and who is not, the President just offered to help the people of . They should take him up on it. Let's put the same energy into where it will make a difference."

The president should call a meeting that includes not only and , but HUD Secretary , a former pediatric neurosurgeon at . The meeting should also include corporate heads with experience in urban renewal and , which builds houses for the poor.

Carson and Haley would mobilize volunteers to help remove trash from neighborhoods. Pest removal companies would eradicate rats from infested areas. Construction companies would tear down abandoned buildings. New homes would be built in their place. Tax breaks would be offered to businesses that establish a presence in restored neighborhoods.

Unemployed adults would be trained with skills needed by employers. Free bus transportation would be offered during the training period and for the first few months of a new job. Young children would be cared for at churches, or daycare centers, subsidized by voluntary donations and tax money. Older children would be allowed to escape their dangerous and underperforming public schools.

The Children’s (CSF), based in , has a chapter. In an email, CSF President says: "Our program currently helps 275 kids in . 40 percent of eligible families applied when we first offered scholarships in 1999." She estimates at least 4,000 ("and probably more") are on wait lists for space in charter and private schools -- and scholarship money -- to become available. CSF children receive uniforms, teachers who love them and are told God does, too. They discover a purpose for their lives and hope for a better future.

The president should make this a cause and an example of what good-hearted people can do to solve a problem. Volunteers would get satisfaction from contributing to the improvement of peoples' lives. Corporations who donate their services could deflect the "evil" label some politicians have attached to them. Critics would be hard-pressed to call a racist if he saves the lives of many underprivileged citizens in that city, which could then serve as a model for others, notably and .

It's better than proposals by some members of for reparations for the descendants of slaves because once the money is gone there would be nothing left.

The political benefits to the president and could be enormous, but that should not be their primary motivation. A plaque had on his desk in the read, "There is no limit to what a man can do or where he can go if he does not mind who gets the credit."

Do this, Mr. President, and you will fulfill many verses in Scripture that command us to help the poor. One is Proverbs 19:17: "Whoever is kind to the poor lends to the Lord, and he will reward them for what they have done."

Another is more direct and personal: "Rich people who see a brother or sister in need, yet close their hearts against them, cannot claim that they love G od." (1 John 3:17)