They're coming for our guns (really) 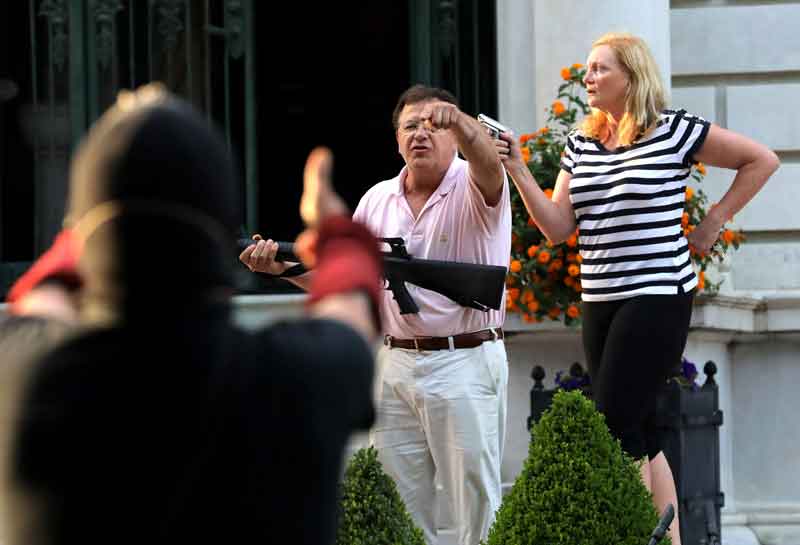 For years conservative groups and especially the National Rifle Association have been warning that the government would find a way to confiscate the guns of law-abiding Americans. Many dismissed what they regarded as a scare tactic designed to raise money.

What is happening in St. Louis should awaken us to the fact that those fears are well founded.

The top prosecutor in St. Louis has charged a married couple with "felony unlawful use of a weapon for displaying guns during a racial injustice protest outside their mansion."

Mark and Patricia McCloskey, who the media identify as being "white," are in their 60s. Both are personal injury attorneys. Circuit Attorney Kim Gardner says their actions risked creating a violent situation during an otherwise "peaceful protest" last month.

Doesn't Gardner have it backwards?

The gun owners, who say protesters had trespassed on their property, claim they were protecting their home from what could have turned into a violent mob as they no doubt had seen happen on TV in other cities. A case could be made that their display of weapons prevented violence, which is one of the purposes of the Second Amendment. Having a gun for personal protection can be a deterrent without it ever being fired. The McCloskeys did not fire their guns, but only waved them at the protesters while yelling at them.

The McCloskeys have some powerful defenders, including President Trump and Missouri Governor Mike Parson, a Republican, who has said he will pardon the couple if they are convicted. Sen. Josh Hawley (R-MO) is another supporter. Hawley has asked Attorney General William Barr to begin an investigation to determine whether the McCloskey's civil rights have been violated.

Missouri Attorney General Eric Schmitt is also on the side of the McCloskeys. Schmitt has filed a brief with the court that says in part, "The right to keep and bear arms is given the highest level of protection in our Constitution and our laws, including the Castle Doctrine." The Castle law was passed in 2017 and provides for "stand your ground" protection for citizens who feel threatened by others.

This case is not only important on its own but demonstrates what could happen if Joe Biden wins the presidency. In March, while the COVID-19 virus was beginning to overtake us, Biden said this about Beto O'Rourke after O'Rourke dropped out of the presidential race and endorsed Biden: "You're going to take care of the gun problem with me. You're going to be the one who leads this effort. I'm counting on you. I'm counting on you." He then added, "We need you badly, the state needs you, the country needs you. You're the best."

Last year while still a candidate, O'Rourke said during a debate carried by ABC News: "Hell yes, we are going to take your AR-15." And after that, what? Having established a precedent that the government has a right to confiscate a weapon owned by a law-abiding citizen, what other guns would O'Rourke (and Biden) come for and on what grounds? What would stop them if more liberal judges are named to the courts and they ignore or re-interpret the Second Amendment?

Do any of the shooters in our major cities pay attention to anti-gun laws, or laws against murder? By definition they are lawbreakers and no one has been able to tell me how passing more laws will suddenly turn them into law-abiders.

By brandishing their weapons, the McCloskeys possibly deterred the marchers outside their home from engaging in actions far worse than their alleged trespassing. If they are convicted, they should be immediately pardoned by the governor. This should be a lesson learned about one of the many dangers of a Joe Biden presidency.