America: Love it or leave it (again) 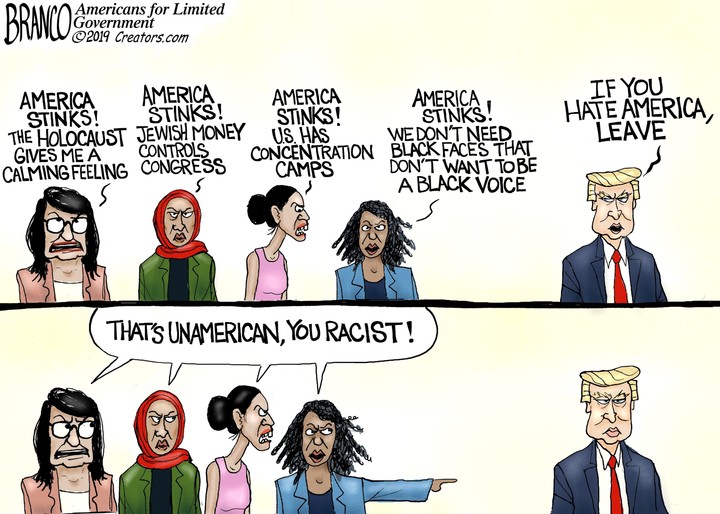 >
The phrase "America, Love It or Leave It" has a pedigree dating back at least to the McCarthy Era. In the '70s, the phrase was employed again against those protesting America's involvement in the Vietnam War. The left has its own version, vowing to leave the country if a Republican is elected president. They rarely do.

On Monday, resurrected the phrase as he again publicly slammed four freshman congresswomen for their criticism of and his policies. He suggested they "go back where you came from," though they are all American citizens.

Whatever one thinks of the president's remarks -- the predictable "racist" charge was leveled at him because the four are women of color and two are Muslim -- the president is setting up for what could be a major defeat in the 2020 election by forcing them to embrace (probably) these people and their statements, thus causing further fallout within the party, or denounce them (unlikely) and risk electoral harm. It's a lose-lose for .

AXIOS, a nonpartisan news and information company, shared the results of a small, exclusive poll taken in May of a "crucial group of swing voters." Respondents, "1,003 likely general-election voters who are white and have two years or less of college education" put their approval of , , and in low double or single digits.

Only last week did Speaker , discussing the congresswomen's opposition to the emergency border aid bill -- a bill the leadership supported -- seem to dismiss them in an interview with New York Times columnist , "They're four people and that's how many votes they got." After the president's comments Monday, Pelosi felt obligated to defend the four congresswomen, but that may come at a cost.

Sen. (R-SC) took things a step too far when he called the four "anti-America" communists on "Fox and Friends," another throwback to the McCarthy Era, which Graham has previously denounced.

Still, this is likely to play well with people who believe too many politicians spend most of their time criticizing America instead of defending it.

The four congresswomen have been critical of the nation they were elected to serve and some have even made anti-Semitic and anti- statements.

The left swims in a deep sea of hypocrisy when it uses buzzwords like "diversity" and "racism." A recent example was in Monday's . The newspaper reported that congressional are opposing four "people of color" nominated to federal courts by . If a Democratic president had nominated these people and opposed them, is there any doubt the "racist" slur would be hurled at them?

Still, was right when he also said it would be helpful if the president would "aim higher" and speak of their policies, rather than engaging in personal attacks. But their hatred for and anti-America statements ARE their policies. Graham is correct in this sense: has the issues on his side. He is winning on things most people care about, especially the economy. Yes, he frequently touts successes, but they are often overshadowed by his personal attacks.

Winning an argument is better than winning a fight. Winning the argument proves your policies are correct. Winning a fight proves nothing, except who is able to beat up another person. It does not advance an agenda.

There is no excuse for calling detention centers "concentration camps" and likening the to Nazi prison guards, especially since the four freshmen and other have the power to fix the migrant crisis, but won't because it appears they prefer having the issue to batter .

If this keeps up, who defend such outrageous statements are likely to find themselves in the minority again. Many Americans are fed-up with hearing this stuff and are likely to take revenge at the polls.