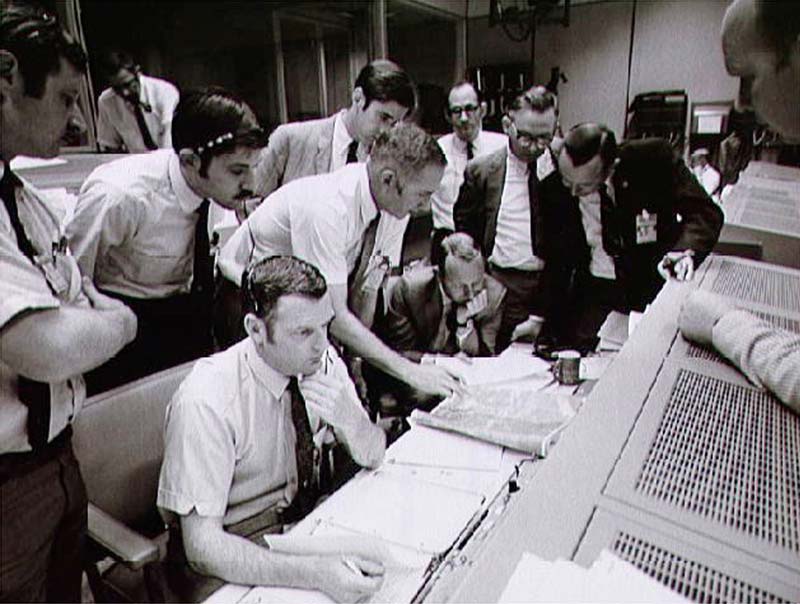 View of Mission Operations Control Room during the Apollo 13 oxygen cell failure which the crew of the Apollo 13 had reported to mission control hours earlier.

You had to be there 50 years ago, and I was. As a young reporter for a local TV station in , I frequently visited NASA ("the space base," we dubbed it), met many of the astronauts and reported on their exploits.

Along with people from around the world, I watched the lunar landing on television, , fulfilling goal of putting a man on the moon by the end of that decade.

A new, three-part documentary, "Chasing the Moon," recalls the American space program, which followed the Russian launch of the first satellite in 1957. It is a brilliant film, created and directed by , and a useful reminder for the two generations born since then of what a united America can achieve.

anchor makes that point when he says, "It shows what the richest nation in history can do when it puts its mind to it." If you missed the broadcast, you can find the series at pbs.org.

About 11, a reporter says, "It is like seeing sail out of port."

, one of the astronauts who followed the original seven, later became a close friend. Lousma was the recipient of the ", we've had a problem here" message from 13 and the pilot for Skylab 3 in 1973. He also commanded the third space shuttle mission in 1982.

I asked for his remembrances of that time and about the legacy of America's most famous spaceflight.

Lousma said: " was a bright light, a ray of hope, a force for 'good' during the Vietnam War controversy with its riots, civil unrest, demonstrations, violence, turmoil, burning draft cards...

"Unpredictably, unified the world for a short time. I recall photographs of people in many nations watching TV during the landing ... a worldwide sense of 'oneness'. They were not just 'watching;' they seemed part of our team, as if this were a victory for all earthlings, not just for the We were vicariously representing each one of them. There was a similar response to the drama of 13.

"It made us proud to be Americans; it set a standard for excellence; it established a baseline for advanced exploration and discovery."

It wasn't all 'The Right Stuff," as wrote. NASA covered up the extramarital affairs and excessive drinking by many of the earlier astronauts for fear of hurting public confidence in the program.

In her review of book, "," writes in : "Out of the 30 astro-marriages -- spanning from the first American launched into space in 1961 to the moon landing in 1969 -- only seven couples would stay married. ... To the outside world, they were perfectly coiffed, apple pie baking housewives. But with their sisters -- the AWC -- they allowed their armor to fall, the tears to drop, and the truth to come out."

The debate then, as it has been with other flawed humans who achieved great things, is whether the goal -- beating the Russians to the moon -- eclipsed those personal flaws. Probably not to the wives, but to the nation, ignorant of their frailties, it did.

One story adds to the many illustrations of the power of fame the astronauts had. On a commercial flight, I sat across the aisle from Annie and , he the first American to orbit the Earth and at the time a Democratic senator from . " 13" was shown. At the end of the film, passengers approached Glenn for his autograph. I said, "John, you know they don't want your signature because you're a senator, right?" He laughed and said, "Don't I know it?"

In today's divided nation, it should be more than an exercise in nostalgia to revisit those exciting years when space really was "the final frontier" and America came to lead the way in exploring it.