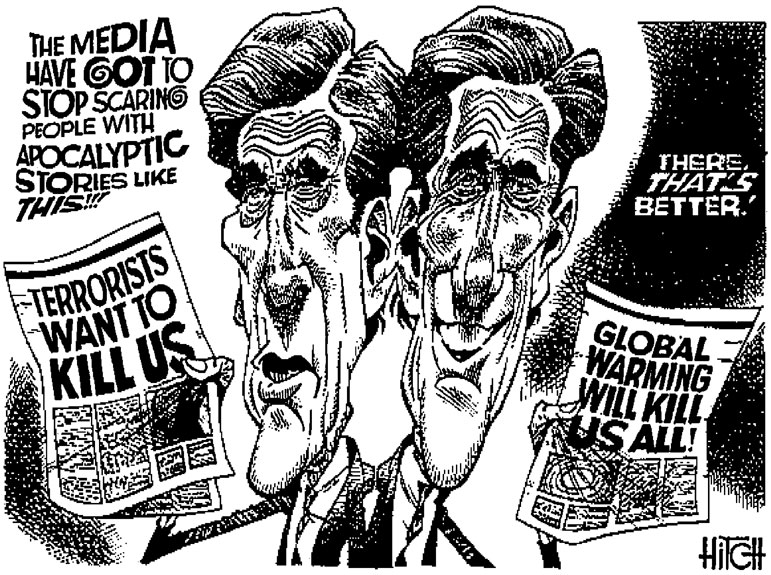 This year marks the 30th anniversary of the beginning of the "global warming" (now known as "climate change") panic.


As noted by , it was on that NASA scientist testified before the and asserted a "high degree of confidence" in "a cause-and-effect relationship between the greenhouse effect and observed warming."


Predictions, especially those of global significance, should be rigorously examined to see if they have come true. In the case of , it's apparent they have not.


Hansen offered three possible scenarios. One would see the earth's temperature rising 1 degree Celsius by this year; the second would see a 0.7 percent temperature increase and the third would see a smaller increase that would flatten out by 2000.


The third scenario was the most accurate. Hansen made many other predictions, including stronger hurricanes related to global surface temperatures. "The list of what didn't happen," notes the Journal, "is long and tedious," adding, "...it's time to acknowledge that the rapid warming he predicted isn't happening. Climate researchers and policymakers should adopt the more modest forecasts that are consistent with observed temperatures."


That isn't about to happen, because, as with immigration reform, most politicians prefer the issue to any solution.

is an American atmospheric physicist known for his work in the dynamics of the atmosphere, atmospheric tides and ozone photochemistry. In an interview posted on wattsupwiththat.com, the global warming and climate change website, Lindzen says:


"The mostly non-scientist proponents of climate hysteria realize that distant forecasts of remote problems by inadequate models are unlikely to motivate people to shut down modern industrial society. They, therefore, attempt to claim that we are seeing the problems right now. Of course, the warming that has occurred over the past 200 years or so, has been too small to have been a major factor. However, objective reality matters little when it comes to propaganda -- where repetition can effectively counter reality."


Repetition is precisely what we are experiencing in the major media, which have selectively interviewed people who promote the climate change myth. These include some politicians, who see it as another way to regulate and dominate our lives.


As if to confirm this, climatedepot.com notes: "NBC News is hyping a report that claims meteorologists are supporting the George Mason and Climate Central effort to promote climate change fears on your nightly weather forecast.


"The climate information being promoted by the activist meteorologists is highly suspect and the groups behind the effort have supported shutting down any scientific debate by supporting RICO statutes against skeptics and they have benefited greatly from federal funding of their efforts."


When the hype subsides the facts catch up. In 2015, the reported: "Two events last week brought yet further twists to one of the longest-running farces of our modern world. One was the revelation by the that in 2013 and 2014, after years when the volume of Arctic ice had been diminishing, it increased again by as much as 33 per cent. The other was that Canadian scientists studying the effect of climate change on Arctic ice from an icebreaker had to suspend their research, when their vessel was called to the aid of other ships trapped in the thickest summer ice seen in for 20 years."


Numerous apocalyptic predictions of an imminent end of the world because of "climate change" have proved wrong. Their objective of big government robbing us of more of our freedoms and spending trillions of dollars on a made-up problem has been exposed.


We can and should recycle and not pollute the atmosphere, water or land, but not because it will lower the earth's temperature.


Cal Thomas, America's most-syndicated columnist, is the author of 10 books.