An opportunity for Trump in Tulsa 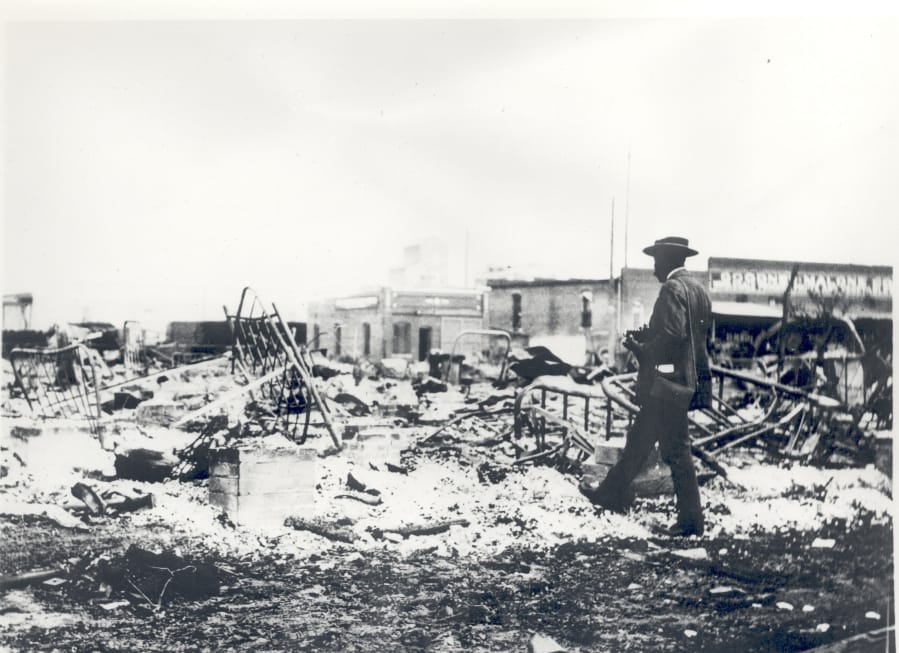 A man looks over the remains of buildings after the attack on Tulsa's Greenwood neighborhood in 1921. From the ashes of the Tulsa Star rose the Oklahoma Eagle. Credit: TNS

President Trump on Tuesday unveiled a plan to make reforms in police departments and acknowledged for the first time the existence of "systemic racism." He also promised to meet with some African American families whose relatives have been killed by police officers.

That is one step toward healing our deep racial divisions.

The next opportunity comes Saturday as the president is scheduled to break his rally "fast" in Tulsa. The Trump campaign claims they have received 800,000 ticket requests. Though not all will get into the 20,000-seat venue, the Trump re-election effort will have mined additional names for its digital campaign.

The president should not just use the speech to fire up his base. He should propose something substantive that might provide, if not a solution to racial tensions, then at least begin to solve the underlying problem, something Democrats have only talked about for 50 years.

Here are my suggestions for what the president might say:

There is only one race — the human race. We are one seamless coat of many colors, one "body" with many parts, each with an important function that contributes to the whole. We call ourselves the UNITED States of America for a reason. No other country exemplifies such unity. Though we have our disagreements and even sometimes divisions, our oneness is our greatest strength.

There is no "pure" or "master" race. No race is superior to another. To hate someone because of the color of their skin is to hate one's self because we all share the same origin story, the same human DNA. This is all part of God's doing in His ultimate creative and most beautiful work – humanity. We are created in His image.

Historically, many of our churches have not always been on the right side when it comes to race. Many churches oppose civil rights for African Americans and wrongly quote Scripture to justify their positions. As Abraham Lincoln said during our most divisive war: "Both read the same Bible and pray to the same G od; and each invokes His aid against the other. ... The prayers of both could not be answered; that of neither has been answered fully. The Almighty has His own purposes."

I am today proposing a new alliance between white evangelical churches and their African American brethren. At bottom, racism and the many horrors that have flowed from it are matters of the heart. Who better to address heart matters than our evangelical churches, which preach a gospel of redemption and changed lives?

This should not be an obligation, but a duty, a privilege and blessing. Both Old and New Testaments speak of our obligation to the poor and excluded. Addressing racism and poverty are conservative issues. We conservatives, as the late HUD Secretary and Congressman Jack Kemp observed, "…define compassion not by the number of people who receive some kind of government aid, but rather by the number of people who no longer need it."

Our goal is to get as many people as possible who desire a better life to get on their feet and live independently of government with the dignity and honor that goes with a job and a stable family. Our churches are uniquely equipped to provide such help. A changed life creates optimism and self-respect, while it earns the respect of others.

I can think of no better person to lead this effort than current HUD Secretary Ben Carson, whose own story of overcoming poverty and crime when growing up in Detroit is an inspiration to us all. On Tuesday, the president and Carson plan to convene a closed-door meeting with 900 evangelical and social conservative leaders to work out a plan to begin the redemption and reunification of our great country.

With G od's help and guidance, I know we can do this."

America needs a speech like this, Mr. President. Will you deliver it?