A tribute to Charles Krauthammer 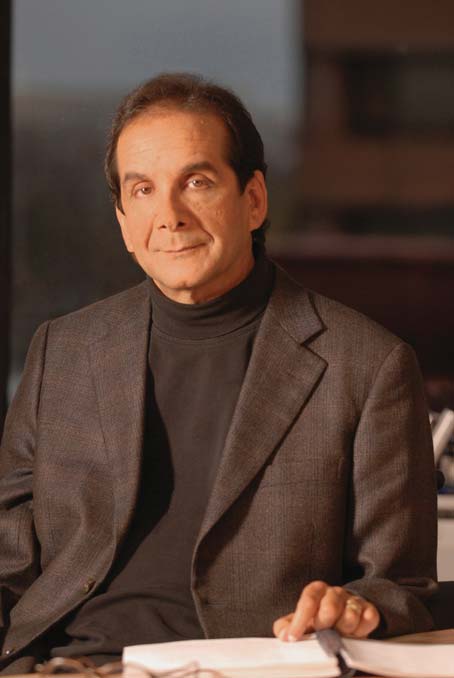 I have often thought that tributes to those we love are best made when the object of our affection is still with us, rather than at their funerals.

I do not know well, though we would occasionally see each other at when I worked there and at baseball games.

Others have commented on his brilliance, his dry wit and his skill at deconstructing arguments made by his political opposites. On "Special Report with ," a program on which he regularly appeared, his fellow panel members would sometimes sit in stunned silence following an argument he had made that seemed to them irrefutable.

Krauthammer had come a long way from his days as a speechwriter for to political positions directly opposite those of his former boss. In this he was like , who also had studied and experienced the weakness of liberal domestic and foreign policies and found the conservative point of view a better path to solving problems.

What I have found most amazing about Charles is that despite an accident in his youth that left him paralyzed, he never complained, at least in my presence, and there is no public record of his having done so. Neither did he accept or embrace pity. He scooted around in his powered wheelchair and into and out of a van especially configured for him.

While he was unable to exercise his limbs, he exercised his mind to the great benefit of all those who have read his syndicated column and watched him on TV. He spoke slowly, partly from physical necessity, but also because it helped him make his points and demand a hearing. In the rapid-fire speech characteristic of cable TV, one was more likely to remember what Krauthammer said.

So much of our political discourse today sounds like regurgitated sound bites put out by the and the . Few speak of solutions with the historical knowledge and deep understanding that Charles possesses.

Like Reagan's final letter to the American people in which he announced he had Alzheimer's, but concluded on an optimistic note about the future of America, Charles wrote in his final column that he is grateful for the life he led. How many able-bodied people can say that? One might not expect such a sentiment from a man who has experienced the most extreme personal challenges, the last being cancer, which has taken over his body.

has been an inspiration to me in many ways beyond his considerable talent. He has demonstrated that even if life seems to deal you a bad hand the game doesn't have to be over. Blind people are known to have enhanced abilities in other areas, such as hearing and touch. Charles overcame weakness in one area with superior strength in another.

When he announced recently that doctors told him he had just weeks to live, I thought of song, "." It is a fitting epitaph on a remarkable and consequential life.

"And now the end is near

And so I face the final curtain

My friend I'll say it clear

I'll state my case of which I'm certain.

I've traveled each and every highway

But more, much more than this