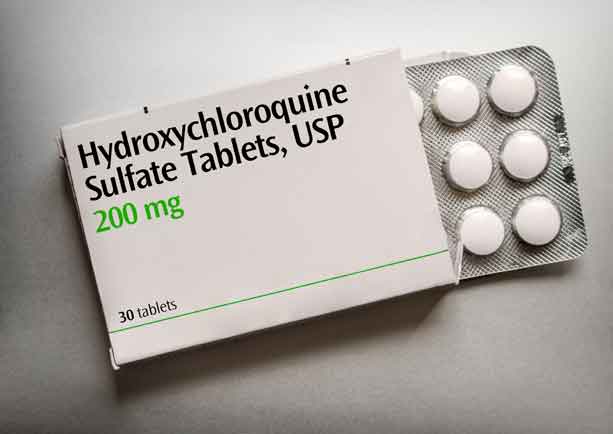 On Monday, in an off-the-cuff comment following a White House meeting with restaurant industry leaders, President Trump revealed that he has been taking the anti-Malaria drug hydroxychloroquine for “about a week and a half now” to protect himself from COVID-19.

Asked why, the president said he has heard from a number of people, including a doctor from Westchester, New York, that it is a good preventative. He said he had checked with the White House physician who said he does not object to his taking the drug.

Asked what evidence he has that the drug is effective, the president responded: "Here's my evidence: I get a lot of positive calls about it."

The Food and Drug Administration, according to the Washington Times, has warned against using hydroxychloroquine "outside of the hospital setting or a clinical trial due to risk of heart rhythm problems." The National Institutes of Health has also advised that doctors use caution when prescribing it.

On Fox News, host Neil Cavuto interviewed Dr. Bob Lahita, chairman of medicine at St. Joseph University Hospital in Paterson, New Jersey. Dr. Lahita said he has seen “no effect whatsoever” when hydroxychloroquine is used to treat the coronavirus. In fact, said Dr. Lahita, if taken in combination with certain other drugs, it could cause arteries to expand, which could be fatal.

Instead of taking and promoting this unproven and possibly dangerous drug, the president should have been touting a new vaccine produced by the American company Moderna. The New York Times reports the company tested eight healthy volunteers and discovered the experimental vaccine was “safe and provoked a strong immune response.” The results have put the vaccine, known as mRNA, on an accelerated timetable so that larger human trials can begin.

It is always dangerous, especially when it comes to medications, to believe anecdotal information. The president said the unnamed doctor wrote him in praise of hydroxychloroquine. He also said thousands of front-line health workers are taking the drug as a prophylaxis.

While I don’t doubt the president’s sincerity, he has no medical training and never even played a doctor on TV. It is dangerous to promote drugs one knows little about and it is even more dangerous to take them at his age and at what appears to be his increasing weight.

Throughout history there have been snake oil salesmen. The term dates back to the mid-1800s and is linked to Chinese indentured laborers who were brought to America to work on the Transcontinental Railroad, bringing their medications with them. These laborers literally rubbed snake oil on their sore joints, relieving their pain but also attracted the attention of Americans.

A National Public Radio story broadcast in 2013 asked: ”So how did a legitimate medicine become a symbol of fraud? The origins of snake oil as a derogatory phrase trace back to the latter half of the 19th century, which saw a dramatic rise in the popularity of ‘patent medicines’. Often sold on the back pages of newspapers, these tonics promised to cure a wide variety of ailments, including chronic pain, headaches, ’female complaints’ and kidney trouble. In time, all of these false ’cures’ began to be referred to as snake oil.”

I’ve seen these ads in old newspaper clippings. One was placed by a traveling “doctor,” who claimed he could diagnose female ailments while women remained fully clothed. The cure was a bottle he sold, the contents of which he likely mixed up himself.

TV evangelist Jim Bakker is being sued by the Missouri attorney general for promoting a cure for coronavirus. Bakker calls it “Silver Solution.” The lawsuit seeks to stop Bakker and his company from advertising the product, which he has been selling for $80 per four-ounce bottle.

While President Trump doesn’t exactly fit the profile of a snake oil salesman, he should stick to sound medical science and start placing his bets on mRNA and other vaccines that show promise.