Moderate, centrist: What do these mean? 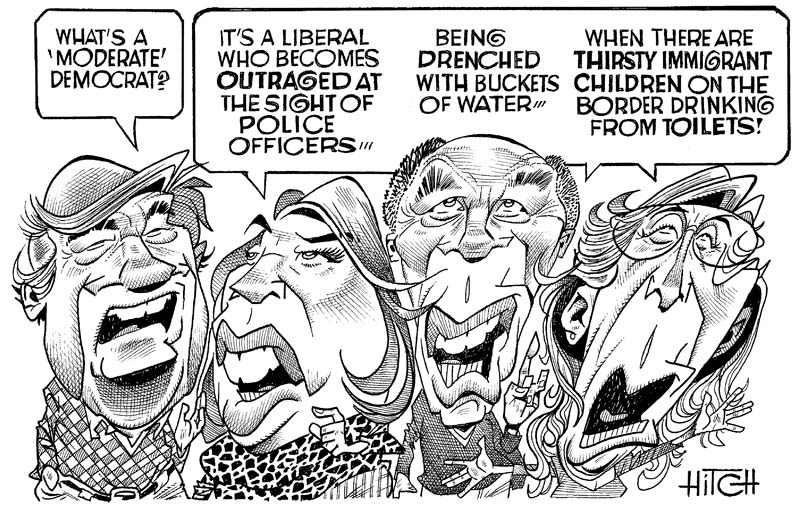 "For all the thunder on the Bernie Sanders left, the most interesting trend in the Democratic campaign this year may be the re-emergence of the moderate wing of the party, led by charismatic new voices: former , mayor and Sen. ."

So begins a recent column by of The , who goes on to name other members of he considers "moderate."

The media attach labels to politicians who reflect their political and social views. Those labels have included "right-wing," "extreme right-wing" "far-right," "out of the mainstream," and when reporting on religion, "fundamentalist."

Occasionally a politician will be described as "liberal," but usually in the context of a policy or personality a media person regards favorably. People most conservatives consider extreme left, like Rep. (D-NY) never seem to be labeled as such by mainstream media.

Labels have an effect on how news consumers and the general public view a person, especially since negative labels such as "intolerant" "racist" and "sexist" are their frequent etymological companions if one is conservative.

The problem is the media never define their terms, nor apply them equally to liberals.

Why is someone considered "moderate" when they vote against protection for the unborn? Watch how and others the media consider "moderate" vote on upcoming Senate legislation that would outlaw abortion after 20 weeks and protect the lives of babies who survive abortion.

Is it moderate to favor same-sex marriage? Is a person moderate who wants to raise your taxes, impose new regulations on your business, undercut the Second Amendment, increase spending (a bipartisan practice in ), control your health care and appoint judges who interpret the in ways that agree with their political agenda, rather than accept the document as written and the intentions of the Founders?

Asked at a town hall meeting in by , a self-described pro-life Democrat, if there was room in the party for someone like her, basically said no.

The exchange as reported by The Washington Examiner continued with Buttigieg saying: "I respect where you are coming from and I hope to earn your vote, but I'm not going to try to earn your vote by tricking you. I am pro-choice, and I believe that a woman ought to be able to make that decision."

"Here's what I can tell you," Buttigieg continued. "I know that the difference in opinion that you and I have is one that we have come by honestly, and the best that I can offer... is that if we can't agree on where to draw the line, the next best thing we can do is agree on who should draw the line and, in my view, it's the woman who's faced with that decision in her own life."

Moderator then asked Day whether she was satisfied with Buttigieg's answer. Day said she was not and that Buttigieg had failed to answer whether he supported efforts to broaden the party's language regarding abortion.

"The second part of the Democratic platform contains language that basically says we don't belong," Day said, noting that it was not too long ago that the Democratic Party tried to accommodate pro-life liberals. "We have no part in the party because it says abortion should be legal up to nine months, that the government should pay for it, and there's nothing that says people who have a diversity of views on this issue should be included in the party."

It is Day's position that should be considered "moderate." Buttigieg and the rest of the Democratic presidential field are not.