DeVos doubles down on education reforms 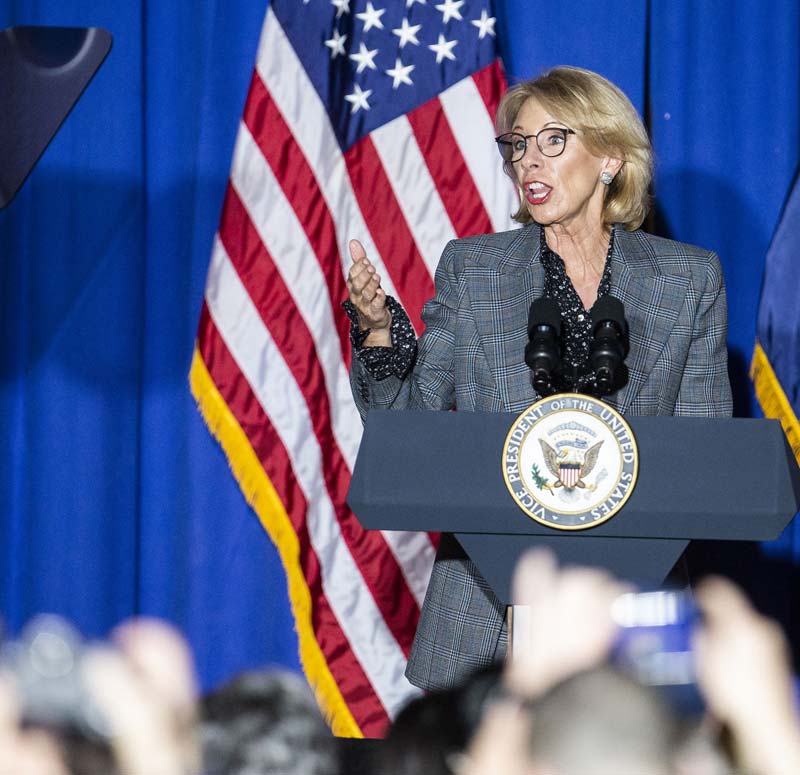 I recently interviewed Secretary of Education who claimed the president's proposed $4.8 trillion budget includes "a significant step toward returning flexibility to the states through a proposal to block grant all of the elementary and secondary education funds ... and let (states) prioritize where those funds are going to be best utilized."

DeVos has tried to reduce the federal footprint in public education, because the more than $1 trillion she says has been spent has not produced positive results.

During his State of the Union address, reiterated his support for school choice. He introduced an girl and her mother and said they had been denied the right to select a better school over the underperforming one she now attends. The president said the girl would receive an "Opportunity Scholarship" anyway.

I asked DeVos who is paying for it?

"The one for her is being privately funded," she says (an aide later told me DeVos is the benefactor and donates her government salary to charities, including school scholarships).

reports the girl actually attends a competitive charter school, so a better pick might have been made, but that still does not diminish the pro-school choice argument.

How many others are on waiting lists for school choice scholarships?

"I don't know if there is a good figure for tax credit type scholarships," says DeVos. "I do know there are over one million families on wait lists for charter schools. I imagine there is close to that number who would opt to do something different if they had the opportunity. In fact, some recent polling data found only about 30 percent saying they would choose the school their child is currently assigned to. The rest would choose a different school in a different setting."

DeVos sees her block grant proposals as "a very compatible step to action on the Every Student Succeeds Act." Signed by in 2015, it updated No Child Left Behind from the George W. Bush administration and among other things "Advances equity by upholding critical protections for America's disadvantaged and high-need students (and) requires -- for the first time -- that all students in America be taught to high academic standards that will prepare them to succeed in college and careers..."

I remind DeVos that during the 2016 presidential campaign, asked why African Americans still vote for a party he said has done nothing for them. DeVos says his appeal is getting through, especially to those children in bad public schools.

"We know that 83 percent of African-Americans support this federal tax credit proposal," DeVos says, citing figures from the , an organization that does lobbying and grassroots advocacy work in the states and , "which added the question this year about the federal tax credit and across the board, 78 percent were for it, so it's very significant. You'd think Democratic presidential candidates would pay attention to this." The AFC national poll of more than 1,000 likely voters also found that "67 percent of Democrat primary voters support this federal tax credit."

What about student loan debt, which some want to forgive?

"There are other ways to get at this ... without congressional action," she says. "One of the things we've done is to add a lot of important information to what is called the College Scorecard. Students can go and compare field of studies between institutions to see how much it will cost ... and then what their first year (after graduation) earning potential is. It is based on real data of those who completed the programs before. We hope students will use this information to make better and wiser decisions of what they are going to pursue from a higher-ed perspective."

DeVos hints she might not stay for another four years if the president is re-elected. She'd have to be asked to stay. But if she succeeds in her proposed reforms, she will have improved the education of millions of children. That would be an enduring legacy.