The state of what union? 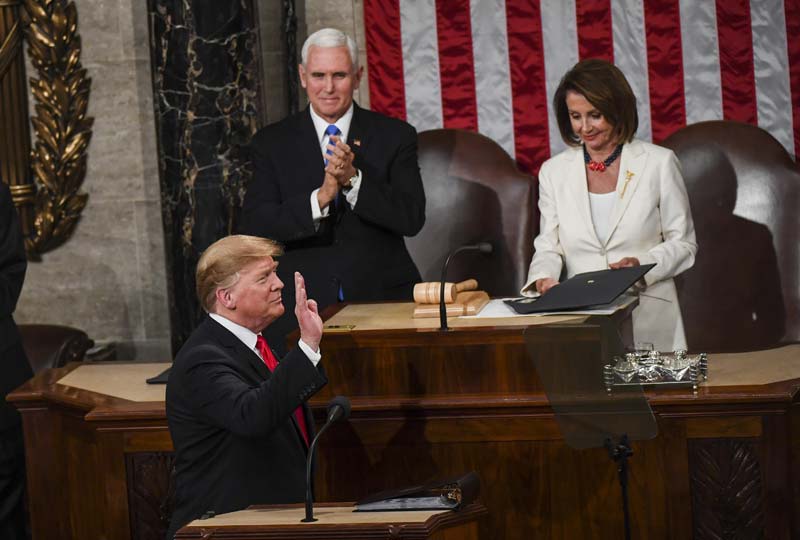 Eloquence is not a characteristic associated with President , but in his State of the Union address Tuesday night, the president not only rose to the occasion, he also delivered a message that was beautifully crafted by his speechwriters, a speech devoid of much of the divisive and combative language that has characterized his first two years in office. It was also well-delivered and well-received, if not by every member of , then by 76 percent of those who watched it, according to a instant poll.

Unfortunately, the likelihood of anything changing in is less than nil. mostly sat on their hands, or smirked and shook their heads in response. The partisan divide that characterizes modern is not likely to be bridged by a single speech. Most likely this was an address designed to enhance the president's re-election prospects. If that was the goal, it may have served him well.

Some viewers may have been surprised that the president directly and with conviction addressed the pro-life issue in light of newly passed Reproductive Health Act, which protects a woman's access to abortion if Roe v. Wade is overturned, and Governor defense of a proposed bill that would, writes the , "...allow abortion up until the moment of childbirth." Trump called on to prohibit late-term abortions, which is not likely to happen, but kudos for him saying "all children, born and unborn, are made in the holy image of God."

The president listed the economic achievements of his administration, which will have a hard timing rebutting. These include record numbers of people working, low unemployment numbers for minorities and high employment numbers for women, which even the white-clad female congressional were forced to applaud.

The president also challenged the growing appeal of socialism among young people. He said he was "alarmed" by it and pronounced, "We were born free and we will stay free," adding that we should "renew our resolve that America will never be a socialist country." Even Speaker was forced to stand and applaud that line to the apparent consternation of "democratic” socialists Sen. (I-VT) and Rep. (D-NY).

The president's use of guests in the balcony was the most effective since inaugurated the practice. From a Holocaust survivor, to one of his liberators; from a first-responder hero of Tree of Life synagogue shooting, to a former inmate recently released under the new "first step" law, designed to address the disparity in sentencing of nonviolent, non-dangerous offenders, the president chose life stories that no one could oppose.

There was his call to "choose greatness" over division and partisanship and to "move forward together," which again is unlikely to happen. If it doesn't and especially if there is another government shutdown mid-February, the president can say he tried and it was the opposition of that thwarted him. Whether such a charge would stick is anyone's guess. It all depends on whether he can rally, not only his base, which is a given, but that part of the country that is sick of the bickering and wants it to end.

People who tuned into the speech expecting some sort of drama obscuring substance -- perhaps a staged walkout, or protests from the balcony -- were disappointed. Such a demonstration would not have served well. In the end, the dignity of the occasion, however fragile, was preserved.