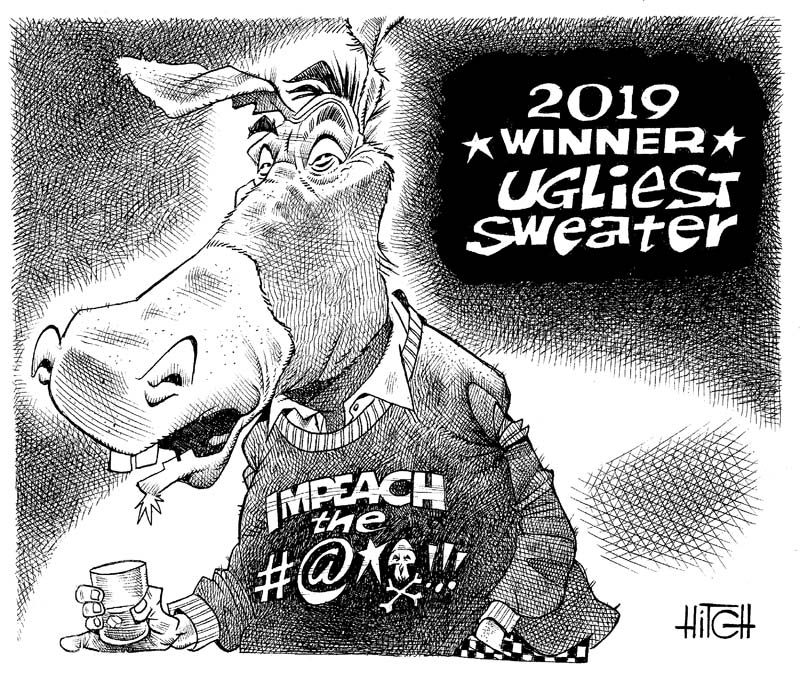 The contrast could not have been starker. One picture showed House Speaker smiling as she signed (with numerous pens) two articles of impeachment against . She passed out the pens like souvenirs to fellow . They were embossed in gold with her signature and rested on silver trays.

The other picture was of signing phase one of a new trade deal with .

Which picture depicted events of greater long-term benefit to Americans? Unless you are a rank partisan out to remove from office by whatever means, the obvious answer is the trade deal.

The latest wrench thrown into the machinery of government comes from who released to their compliant media friends a "note to self" written on a hotel notepad supposedly by , a former associate of , the president's personal attorney and a frequent flyer to . The note said, "Get (Ukrainian president) Zalensky to announce that the Biden case will be investigated."

claim Parnas was an intermediary in the effort to get to investigate and his son, Hunter.

Parnas' credibility would be in doubt were he under oath before a court, instead of "testifying" on various cable TV programs. Parnas heads a company that claims to combat fraud. Oh, the irony!

insist the trial be "fair." How is it fair when continue to leak documents they hope will damage the president and influence senators to vote for his removal from office? Some Democratic senators, who will sit in judgment of the president, have already declared him guilty.

It is politics at its worst and opens the door, as some of the Founders warned, for "normalizing" impeachment.

Historical background is always helpful and so I consulted the , a private, nonprofit organization and a leading platform for constitutional education and debate, where I found this: The "high crimes and misdemeanors" language (in the ) remains controversial today. In two essays... and looked at the Founder's vision: "The Framers meant for the phrase 'high crimes and misdemeanors' to signify only conduct that seriously harms the public and seriously compromises the officer's ability to continue. If the phrase is given a less rigorous interpretation, it could allow to influence and control the President and the courts..."

The article continues: "When the Founders wanted to ensure accountability, they mostly relied on elections and the voters to hold government officials responsible for their actions," said Whittington. "But what might fall into the category of 'other high Crimes and Misdemeanors' was still quite unclear."

Trump's call to president, which is at the heart of the impeachment articles, does not meet the standard of seriously harming the public or compromising the president's ability to do his job as shown by the trade deal and the USMCA trade agreement between the , and , both signed and passed days after impeachment.

That the Government Accountability Office says the president "broke the law" by withholding $250 million in military aid to , aid had approved, doesn't help the president's defenders, but does it rise to the level of a "high crime and misdemeanor"? Senators will decide. But they should recall that in 2014 the GAO ruled prisoner deal to exchange detainees for deserter violated federal law. Obama was not impeached.

Speaker Pelosi summed up the true motives of when she said that regardless of what the does, impeachment will be a "permanent stain" on legacy.

In fact, the stain will be on . It is who have plotted ways to reverse the will of voters who elected Trump. It is who fear he will be overwhelmingly re-elected in November.