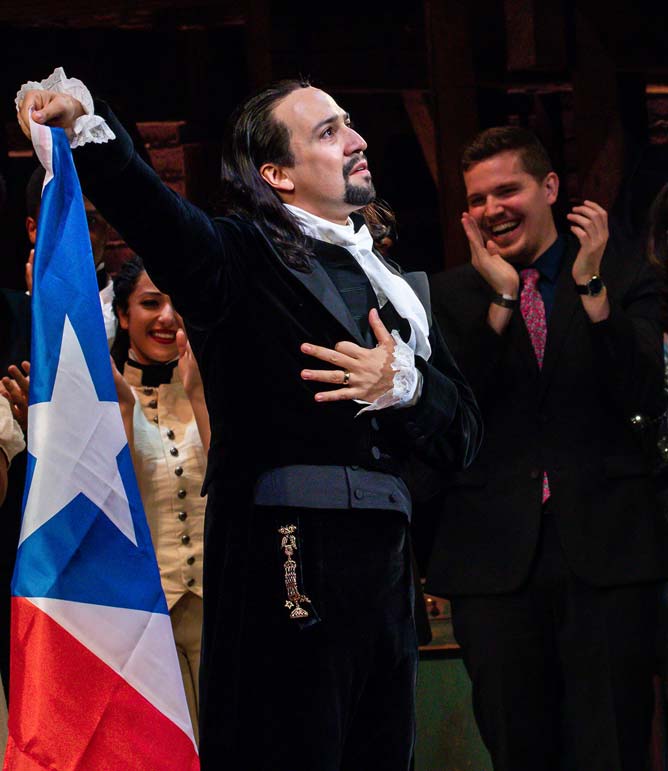 More than 109 lobbyists and 39 Democrat Members of attended a "winter retreat" last weekend in , ostensibly to help raise funds for damage caused by hurricane Maria in 2017, reports . The fun in the sun was enhanced by a limited run of the hit "Hamilton," starring its creator, lead actor, and Democrat partisan, .

Much of the media ignored what used to be called a "junket," probably because the cast of characters were and the major media prefer to focus on bashing and .

Sen. (D-NJ) was there, which seems surprising given his acquittal ("not enough evidence" the judge said) a year ago on corruption charges that included allegations that he cavorted with underage prostitutes in the .

It's not exactly the kind of image one should want to project after so much bad publicity, but he's a Democrat and the standards and expectations of members of that party are different.

The Congressional Hispanic Caucus BOLD PAC was the official sponsor of the retreat. Members tried to give themselves cover by meeting with Puerto Rican officials to discuss ongoing cleanup work on the island. This recalls the way these junkets worked in the past when some Members of would take their wives along to , or other exotic places. The wives would shop and the member would play several rounds of golf, after which he would meet for an hour or so with a government official and declare the junket "official business."

The Washington Examiner reported the San Juan gathering took place at a seaside resort where rooms go for $429 a night. The newspaper said participants paid for their own tickets to see "Hamilton." Well, that's a relief. Now what about who paid for the chartered jet, hotel rooms, food and other entertainment? Could it have been the lobbyists?

All of this partying occurred during the partial government shutdown, but being politicians they had a response to what seemed like insensitivity to those 800,000 federal employees who were denied their paycheck last Friday. BOLD PAC Chair Rep. (D-CA) issued a statement: "As our Bold PAC members make their way to for this important weekend -- the largest contingency of to visit where they'll be hearing from Commonwealth and local elected officials about the ongoing recovery efforts -- we will be closely monitoring the situation in . If there is any progress by or the to reopen the federal government, then we will act accordingly."

Oh, what a relief that is. And why couldn't the "monitoring" be done just as well in ? received no praise for canceling his Christmas holiday in to stay behind and attempt to negotiate with over funding for his "wall" and the re-opening of those parts of government that are closed. See what I mean about double standards, which appears to be the left's only standard.

There was a time when investigative reporters would be looking into this and Members of would be shamed for their close association with lobbyists.

Another Puerto Rican proverb is a good way to help focus the mind when it comes to attempts by these to clothe themselves in humanitarian righteousness: "Although the monkey might dress in silk, monkey it still is."