Free speech is being tested again 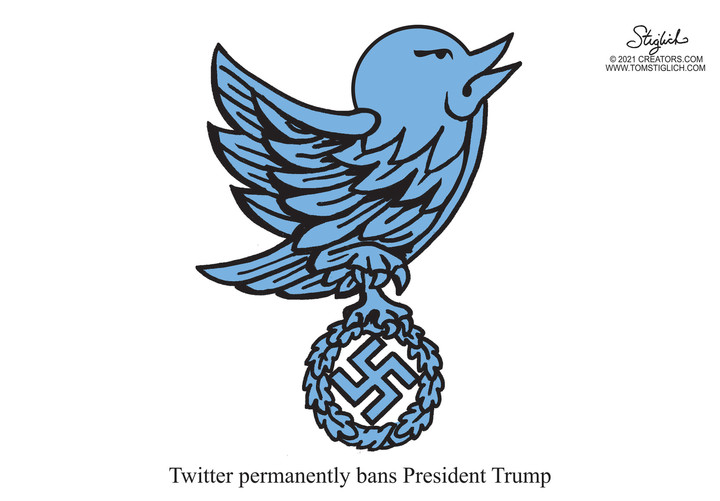 Trump has hinted he may announce an alternative social media platform, possibly one created by him. In a statement tweeted Friday on his presidential Twitter account, Trump wrote: "As I have been saying for a long time, Twitter has gone further and further in banning free speech, and tonight, Twitter employees have coordinated with the Democrats and the Radical Left in removing my account from their platform, to silence me — and YOU, the 75,000,000 great patriots who voted for me. Twitter may be a private company, but without the government's gift of Section 230 they would not exist for long. I predicted this would happen. We have been negotiating with various other sites, and will have a big announcement soon, while we also look at the possibilities of building out our own platform in the near future."

Twitter removed the tweet from Trump's @POTUS account within minutes of when it popped up, and then shut down the account "due to the risk of further incitement of violence." When Trump posted the same message to his campaign Twitter account, "the company permanently suspended that account too." Trump has now also been banned from Instagram, Snapchat and Twitch, and Parler, "the alternative social media platform favored by conservatives, now finds itself virtually homeless on the internet as Amazon (AMZN), Apple (AAPL) and Google (GOOGL) have all booted it from their platforms in a span of a little more than 24 hours."

The American Civil Liberties Union has expressed "concern" over the action by the social media giants. In a statement, Kate Ruane, the ACLU's senior legislative counsel, said: "We understand the desire to permanently suspend him now, but it should concern everyone when companies like Facebook and Twitter wield the unchecked power to remove people from platforms that have become indispensable for the speech of billions — especially when political realities make those decisions easier."

The late writer Nat Hentoff, in addition to being an authority on the history of jazz, was also a fierce defender of the right to free speech. He once told me the answer to speech you don't like is not less speech, but more speech. Banning offensive speech encourages radicals in their extremism. We no longer talk to each other. Too many read and listen only to what supports their point of view and demeans people who believe differently. This is unhealthy for a free society.

Facebook and Twitter made their decision after the president incited his followers to storm the U.S. Capitol last Wednesday to stop lawmakers from formalizing Joe Biden's election victory. Perhaps they believe they have nothing to fear from a Democrat-majority Congress. Republicans in the Senate had been holding hearings into charges by conservatives that social media outlets censor conservative opinion. With Democrats in control of the Senate additional hearings are unlikely to be forthcoming.

In another display of the double standard, the two social media giants still allow the Iranian leadership and people associated with the Chinese Communist Party to maintain their accounts.

Distrust by many conservatives of virtually all media has given rise to fringe platforms that seek to tear us further apart and undermine democracy, while claiming to protect it. These divisions have deepened since the November election as Trump supporters believe the election was rigged. Trump voters deserve to have their concerns addressed, or the cynicism and division will only get worse, as will the potential for more violence. The best way to lower the temperature would be to create a forum that would fairly and accurately examine all claims of voter fraud and ballot manipulation.

As for attempts to ban speech some people don't like, I give you the lyrics from that 1960s musical, "Hair": "Let the Sun shine in." Indeed, let it in, because sunshine – and free speech - can lead to "the mind's true liberation."