The inevitable search for a litmus test 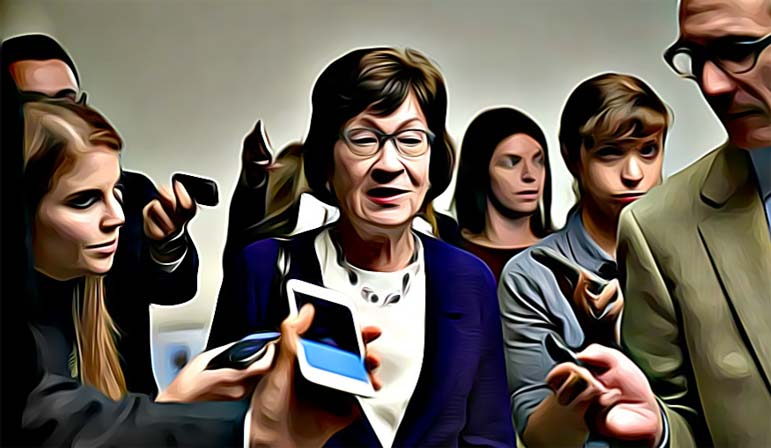 Litmus test, litmus test, who's got a litmus test? Well, apparently just about every senator on the left. A litmus test — a standard beyond which one won't go, like Barack Obama's famous red line in Syria — was once derided as the mark of a rigid mind. Now that the independent mind has gone out of style, everybody wants to impose a litmus test.

Susan Collins, the Republican senator from Maine, wants to preserve her right to an abortion and she says she won't support a nominee who is hostile to the landmark abortion ruling, Roe v. Wade. Freedom to abort a child, even a half-born child, is in the first paragraphs of the feminist catechism, and it's in the words of the hymn everybody sings at the Church of the Holy Scalpel.

Mzz Collins was one of the bipartisan group of senators President Trump invited to the White House to talk about his prospective nominees to the U.S. Supreme Court. She says she encouraged him to "broaden his list beyond" of 25 potential nominees with proven reputations for fealty to the Constitution. She has a list of her own, but unfortunately she's only a senator.

Precedents, she says, are "fundamental tenets of our judicial system." Precedents are certainly good and necessary, as she says, but precedents do not necessarily hold for the life of the republic. Plessy v. Ferguson is the 1896 precedent which held that legal segregation of the races did not violate the Constitution, and Mzz Collins surely thought it was OK for the Supreme Court to smash that precedent with Brown v. Board of Education in 1954, when the court held that state law requiring racially segregated schools violated the Constitution.

Mr. Trump told her that he would not ask a nominee how he or she would vote if the High Court should ever consider repealing Roe v. Wade. No president likely would, and if he (or she) did, no nominee would likely answer. But the Democrats, desperate to derail any Trump nominee and better to slay a nominee before there's even a nominee, are trying to resuscitate abortion as the issue on which all else resides.

Nominees to the Supreme Court have made an art of deflecting questions about how they would vote on specific cases. Well they should. Only in recent years have partisans imagined that nominees should be required to say how they would cast an imaginary vote in an imaginary case. If Sen. Collins is looking for a "fundamental tenet in our judicial system," there's one at hand that she might not like, but until now has never been questioned — the Supreme Court does not decide constitutional issues by polls, preferences of senators or by referendum.

She might be somewhat reassured by the fact that the Supreme Court, when it has a majority of fans of the Constitution, does not repeal a precedent with the casual ease of a senator reversing a vote on an important issue, as if on a whim, to please a restive constituency. The moral convictions of a politician, unlike the words of the Constitution, are easily "adjusted." Senators adjust their moral convictions all the time.

Mzz Collins told an interviewer for CNN News that she does not expect Justice Neil Gorsuch, whom she voted to confirm last year, to vote to overturn Roe v. Wade. "I really don't," she said. "I had a very long discussion with Justice Gorsuch in my office and he pointed out to me that he is the co-author of a whole book on precedent." (Gee, a whole book.) She doesn't think Chief Justice John Roberts would do the deed, either. "I want a judge who will apply the law to the facts of the case with fidelity to the Constitution." So long as it's fidelity to a Constitution the senator approves of.

The size of the Republican majority in the Senate, such as it is — one vote, which the Republicans can afford to lose because Vice President Pence can break a tie — might tempt a senator such as Mzz Collins to hold a nomination hostage until she gets a nominee she thinks she can trust to vote her way. But there are several Democratic senators, on the run in the November elections, who could adjust their moral convictions in the interest of personal survival.

"Elections have consequences," President Obama reminded Republicans, "and I won." But success, as everyone learns, is never permanent.