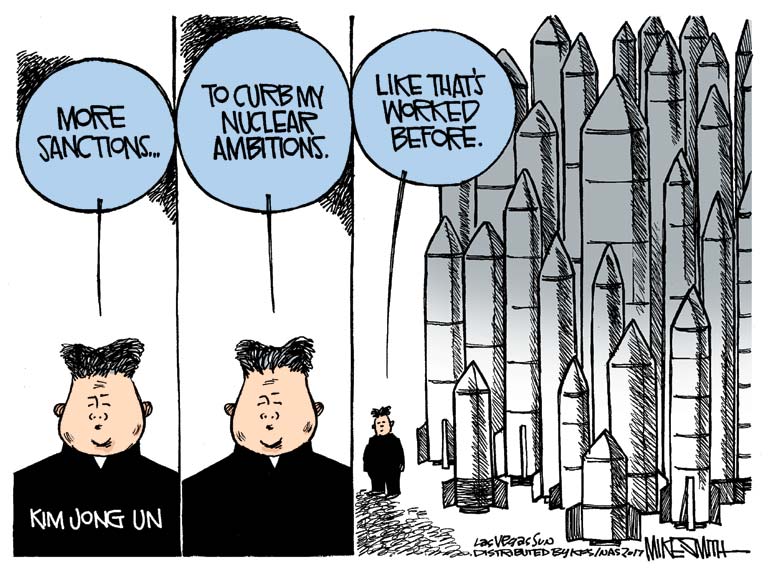 "Just getting there," as Cunard once boasted of transatlantic crossings by ship, "is half the fun." The Atlantic is still there, but ocean liners are not, and almost the only way to cross the ocean sea now is by air. That's no fun at all. Dining aboard an ocean liner has been replaced by dining aloft, and you're lucky to get a pretzel or a stale cracker.

But for Kim Jong-un, going through his travel brochures, counting his dongs or rupees and whatever they're using this week in the Pyongyang markets, and dreaming of his summit with Donald Trump, just getting there will be no fun at all.

Rocket Man doesn't like to fly, because he doesn't have much to fly in. A former CIA analyst tells The New York Times that "we know he has a plane, but it's an old plane, and no one really knows if it works."

Mr. Kim is not a frequent flyer collecting miles. When he went to China several weeks ago he traveled by his private train, fitted out sumptuously for a modest Marxist man of the people. The New York Times observed that "the question of his transportation adds a layer of political complications to a fraught and uncertain summit meeting."

Mr. Kim could borrow a plane, perhaps from China, or perhaps from Russia, which built most of the planes in the North Korean inventory. Protocol and diplomatic appearances prevent Mr. Kim from hitching a ride in a MiG-20, or MiG 19, or whatever hand-me-downs the Russians bequeathed to their sometime friends on the Korean peninsula. He might have trouble fitting his considerable bulk into a cockpit.

There's probably an Ilyushin IL-18 turbo-prop, a workhorse Soviet relic of the Cold War, gathering rust and dust in a hangar somewhere north or south of Pyongyang, but it probably couldn't be cleaned up enough, or painted over enough, to satisfy what Mr. Kim expects when he leaves his bubble of comfort and ease. Nearly 700 of the Ilyushins were produced, and not all of them have crashed.

A few stewardii could be recruited from the cheerleader squad the North Koreans took to the Olympics, for special duty aboard Mr. Kim's train. There's no politically correct prejudice against pretty, young and even shapely airline stewardii in Asia.

The search for a summit site is restricted to cities within 2,000 miles of Pyongyang, which is about the limit of whatever plane Mr. Kim and his aides can scrounge from the hangar. This would eliminate cities in Europe and the United States, which is too bad. When Soviet Premier Nikita Khrushchev came to the United States and his hosts were considering possibilities of what Mr. Khrushchev might like to see â€” the Grand Canyon, rare paintings and the Museum of Modern Art in New York, a Gay Pride Parade in San Francisco â€” he said what he really wanted to see was Disneyland. Anyone who has visited Pyongyang can see how Mickey Mouse would make Mr. Kim feel at home, so Los Angeles should be a possibility in the unlikely event the summit will happen in the land of the free and the home of the brave.

Singapore and even Saigon (which the Vietnamese still insist on calling Ho Chi Minh City) are said to be live possibilities. Mr. Kim's plane, if it's working, could reach Singapore, but Donald Trump would arrive on Air Force One, a big Boeing 747 that would make any strongman envious. Mr. Kim would might feel intimidated by the sight of his plane parked next to the big Boeing. If Mr. Kim goes by ship, such as a relatively small destroyer, the Donald might then summon an aircraft carrier, and the vision of Mr. Kim's modest destroyer tied up next to the enormous USS Nimitz would provoke heartburn envy in Pyongyang.

One complication that President Trump won't have was eliminated Monday when the Senate Foreign Relations Committee approved the nomination of Mike Pompeo as the president's emissary to the world, so the Democratic dream of sending the president to the summit without a secretary of State was eliminated. ("Curses!" Chuck Schumer, the leader of the Democratic minority in the Senate, was heard mumbling to himself as he twirled his impressive black mustache, sprouted just for the occasion. "Foiled again!")

The Democrats gave it their best shot, so to speak. Sen. Chris Murphy of Connecticut grumbled about the president sending Mr. Pompeo, the director of the CIA, on a "secret" mission to North Korea to accept Rocket Man's invitation to arrange a summit. He was just worried there wouldn't be any preparation and the Donald would have to fly "by the seat of his pants."

But no one should knock a man flying by the seat of his pants. That might be the only way Kim Jong-un will get there.