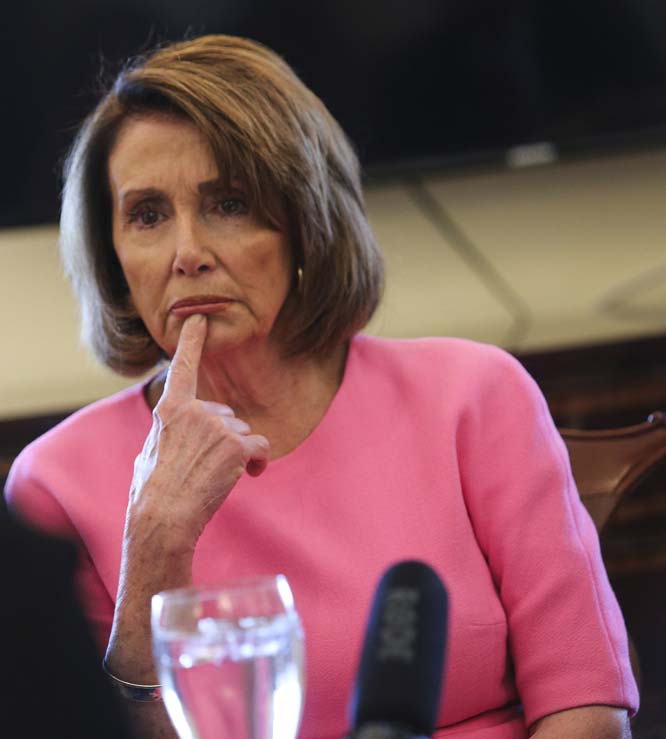 It's amazing how complicated simple principles can become when they're inconvenient to your team.

On Sunday, House Minority Leader created a mess for herself by insisting on "Meet the Press" that Rep. deserves "due process" in the face of a series of accusations of improper conduct.

Politically, Pelosi's performance was a gift to her many critics. For liberals who think she's passed her sell-by date as a Democratic leader, her hapless effort will now be Exhibit A in the brief against her, despite her subsequent efforts to clean up the mess.

For populists on the left and right who think the political establishment is rigged to protect members of the club, Pelosi's effort to protect Conyers -- and , who has also been accused of several sexual transgressions -- while at the same time insisting that we know all we need to know about and candidate is simply a naked partisan double standard.

"We are strengthened by due process," Pelosi insists when the topic is Conyers. But Moore is "a child molester."

This raises the most dismaying gift that Pelosi lobbed to the mob. By circling the wagons around Conyers and Franken (and to some extent), Pelosi is all but guaranteeing the election of Moore.

It is difficult to exaggerate the anger among many who believe that liberals use the rules selectively, shamelessly invoking standards of conduct to delegitimize and destroy their enemies while exempting their own. "Zero tolerance" for thee, "it's complicated" for me.


It was this belief -- hardly unfounded -- that let millions of dismiss allegations of sexual abuse against Trump and now Moore. Every day, conservatives angry at my opposition to Moore tell me "we" can't "unilaterally disarm." If they won't play by the rules, why should we?

This isn't simply a Beltway game. Pelosi is a passionate supporter of Title IX regulations, which have been used to dismantle due process for sexual assault allegations on college campuses. When Education Secretary introduced reforms to Title IX, Pelosi denounced them as "outrageous, immoral attacks on Title IX protections" and a "shocking attack on women." Perhaps college students deserve at least as much due process as congressmen?

But as someone who believes pretty much all the accusers so far, I'm not interested in pecking out another column on partisan hypocrisy. These days, that's the easiest column in the world to write.

Instead, I'd like to point to a possible way out of this mess.

The philosopher famously offered a thought experiment he called the "original position." Imagine you are in some kind of limbo waiting to be born into our world. Hidden behind what he called a "veil of ignorance," you have no idea what "kind" of person you will be -- female, male, gay, straight, sickly, healthy, smart, dumb, rich, poor, black, white, etc. What rules would you want for society?

The point of this exercise is to make you think about what fairness looks like. If there's a good chance you're going to be born poor, you might see the point of having certain protections for the poor. If there's a 50 percent chance you'll be born a woman, you'll probably reject the model of society found in "The Handmaid's Tale." In short, the veil of ignorance allows us see justice through the lens of self-interest.

I don't like or agree with everything Rawls and his fans have done with this thought experiment, but the original position is nonetheless a useful way of thinking about society.

We live in a moment beset by tribalisms, from partisanship to myriad forms of identity politics. All of them work on the assumption that neutral rules are unfair or unjust because my tribe is somehow especially noble or your tribe is especially evil.

The original position is not as original to Rawls as some believe. In fact, it's embedded in the very idea of classical liberalism, because it presupposes that we should all be equal in the eyes of God and the government, and that therefore the rules of the society should be fair for everybody -- and applied to everybody equally. It's a simple principle, but everyone wants to make it complicated these days.