Stan Lee's work a reflection of his times 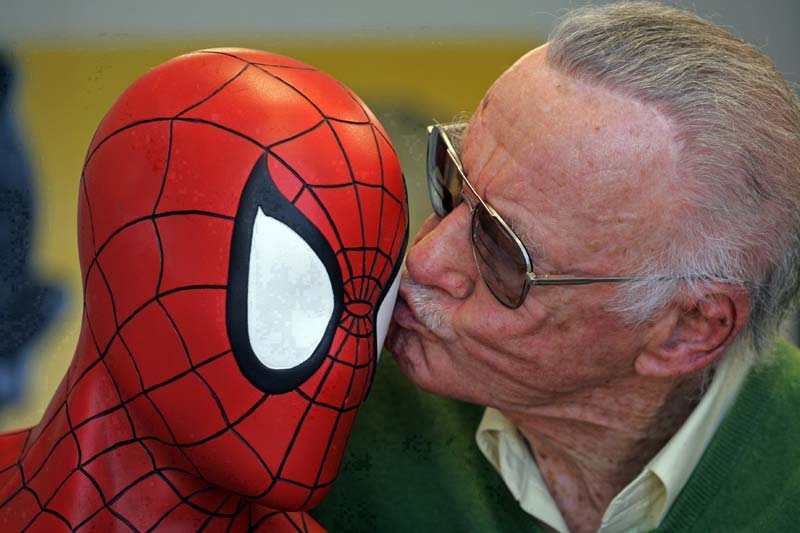 , the reinventor of the comic book, died Monday at the ripe old age of 95.

Comic books get a bad rap, although not nearly as bad as they used to. There was a time when comic books were the cause of an all-out moral panic. After the release of psychiatrist Fred Wertham's book "The Seduction of the Innocent," the held hearings to grapple with the alleged moral rot of comics, which were supposedly fueling juvenile delinquency and moral degeneracy. Batman and Robin, you see, were secretly gay. Superman was an un-American ersatz fascist.

"Superman (with the big S on his uniform -- we should, I suppose, be thankful that it is not an S.S.) needs an endless stream of ever new submen, criminals and 'foreign-looking' people not only to justify his existence but even to make it possible," Wertham wrote.

was established in 1954 to protect children from consuming Satan's apple in cartoon form.

As silly as all that was, at least the anti-comic puritans took comic books seriously. And while Wertham et al. went too far in the wrong direction, comics are an important window into our society.

Prior to and Marvel Comics, superheroes were fairly two-dimensional characters. Superman was, well, just super at everything. He fought for "truth, justice and the American way." He was also a kind of super-moralist, always knowing instantly what was right. Some writers claim he was the first "social justice warrior."

In Superman's first adventure (Action Comics No. 1), long before he ever battled , he saved a woman from being wrongly executed, stopped a senator from being blackmailed and protected a woman from her abusive husband. "Delivering justice, protecting family and stopping corruption, Superman represented the newly expanded New Deal state," observed in The .


The New Deal was a real-world example of political philosopher called "politics as the crow flies" -- a rationalist approach that tries to use the state as an active participant in life to achieve desirable ends without much concern for the means. It should be no surprise that Superman transitioned from New Deal warrior to World War II warrior. He was fighting Nazis long before American troops were.

Lee grew up professionally in this "Golden Age" of comics, but he also rebelled against it. While a member of the so-called Greatest Generation, Lee better represented the more ironic attitudes of the postwar generation. His superheroes struggled with their powers and their moral responsibilities. Spider-Man, the quintessential Marvel character (at least until the introduction of Wolverine) was a nerdy, angst-ridden teenager who only reluctantly accepted his role and the idea that "with great power comes great responsibility." Lee's heroes quarreled with each other, had romantic setbacks and sometimes even struggled to make the rent.

The baby boomers, Lee's target audience, were plagued with a great unease about living up to the legacy of their parents' generation. "We are people of this generation," begins the Port Huron Statement, the 1962 manifesto that largely launched the '60s protest era, "bred in at least modest comfort, housed now in universities, looking uncomfortably to the world we inherit." They believed they were special but didn't know exactly what to do about it.

This kind of ambiguity suffused Marvel's storylines. The X-Men were mutants, a government-persecuted minority community, bitterly divided between assimilationists and rejectionists. Their powers were a thinly veiled metaphor for the confusion of puberty. The Thing, constantly harassed by a local street gang, hated that he had become a grotesque, but when given the choice of becoming human again, he opted to keep his powers.

debuted in his own comic by punching Hitler in the face on the cover, but by he was emoting, "I'm like a dinosaur -- in the cro-magnon age! An anachronism -- who's out-lived his time! This is the day of the anti-hero -- the age of the rebel -- and the dissenter! It isn't hip -- to defend the establishment! -- only to tear it down! And, in a world rife with injustice, greed, and endless war -- who's to say the rebels are wrong? ... I've spent a lifetime defending the flag -- and the law! Perhaps I should have battled less -- and questioned more!"

Of course, there was plenty of fighting, derring-do and onomatopoetic "pows," "bamfs" and "snikts." But future historians looking to understand the near-century of Lee's lifetime would be well-advised to look at his life's work.