Obsession with race is stretching beyond reason 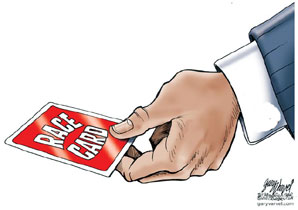 " is an instrument of white supremacy -- and sexism," exclaimed .

: "Math is racist: How data is driving inequality."

From the affiliate in : "'To be white is to be racist,' Norman student offended by teacher's lecture."

Wow, things are bad here in America. Maybe I should move to ? Uh oh, from : "Canoes reek of genocide, theft and white privilege, says Canadian professor."

Is there no place safe from white supremacy? Let me check the . " proves your white male privilege is not universal."

You might say this is a cheap technique. Headlines are supposed to be provocative, particularly in the age of clickbaiting that passes for much of what we call journalism. Let us look to the academy, where cool reason rules.

(Hey, stop laughing. I haven't even gotten to the punch line yet).

Over at the , we're told that condemning racism is -- wait for it -- racist.

Milazzo's claim is hardly controversial in the hothouse alternative universe of higher education. What Milazzo calls "colorblind logics" hold everybody to equal standards of fact and reason. This wacky notion is the wellspring from which we got the scientific revolution, the Enlightenment, the rule of law, doctrines of universal human rights, the abolition of slavery, the emancipation of women, the civil rights movement, the concept of free speech and unprecedented material prosperity.

Reason is the tool that brings us consensus, appeals to our conscience and keeps us from returning to the jungle.

It all reminds me of that great scene from "Monty Python's Life of Brian" where a revolutionary asks, "What has the Roman Empire ever done for us?" A comrade lists a bunch of things, and the man replies, "All right, but apart from the sanitation, the medicine, education, wine, public order, irrigation, roads, the fresh-water system and public health, what have the Romans ever done for us?"

Activists today are clear-cutting vast swaths of civil society to make room for reason-free zones where feelings outrank facts -- they call them "safe spaces." And if they had their druthers, the entirety of the continent, if not the globe, would be one giant beanbag chair-strewn realm of hugging and unapologetic whining.

Seemingly every day there's another story of a college campus caving into the notion that free speech and unhappy facts are racist.

The election of , a man I could not have been more critical of, has turned the safe spaces into kinds of internal refugee camps where the weeping delicate flowers can wilt in terror.

I did not like how Trump talked about issues of race. Some of his most ardent supporters have views on race that I find abhorrent. But they constitute a tiny minority of his coalition. Just consider that if you subtracted from Trump's column all of the voters who had also previously voted for , surely would have won.

Here's some free advice for all the liberals insisting that Trump was elected by racists: The more you say that, the more you help Trump.

I can understand why this is confusing. There's a certain breed of guilty white liberal who actually enjoy being called racist, confessing their racial sins and denouncing less advanced white people. The hot new term for this is "virtue signaling" -- a way of communicating how enlightened you are.

But there are a lot more white people out there who are not racist and therefore do not like being called racist or being berated about how their country is racist. They also sense that the "everything is about race" crowd is using race as a cudgel to silence critics and have their way.

That sort of thing begs for a backlash. You can call it racist if you want -- some people do with everything else -- but it won't play well outside the safe spaces.