Why there is inaction on gun laws 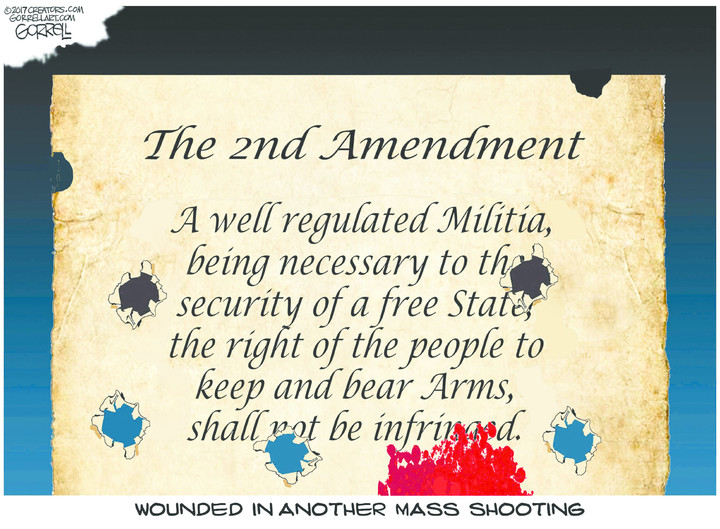 On public policy grounds, the pro-gun people have the better arguments. Firearm homicides have declined since the 1990s despite the loosening of gun laws.

Almost none of the remedies proposed in the wake of mass shootings would have actually prevented those crimes (though had so-called bump stocks been banned -- as they should be -- fewer would have died in the shooting last month).

Indeed, it's common in the aftermath of shootings to hear pundits and politicians call for the passage of laws that already exist. I've lost count of the number of times people have insisted that "machine guns" be banned -- they essentially already are. Others talk about banning "assault weapons" as if such a designation describes a specific kind of weapon. It doesn't. Nor would banning assault weapons, however defined, put much of a dent in the problem. Rifles of all kinds account for just 3 percent of the murder rate.

The slaughter at a church on Sunday fits the pattern. Calls went out for background checks. But the shooter passed his; he just lied on the application. Some argued that people convicted of spousal abuse -- like the shooter -- should be barred from getting a gun. That's already federal law. (To be sure, such laws should be enforced better than the Trump administration seems inclined to do.)


More broadly, and a -controlled will not do anything significant to restrict gun rights in America. And the experience under , particularly in the wake of the Sandy Hook shooting, demonstrates that even some don't want to move against their electoral self-interest.

Indeed, the main reason for inaction isn't the "stranglehold" of the -- a relative piker when it comes to political spending -- but the fact that millions of gun owners are likely to vote on the gun issue, while millions of gun-control supporters are not. Also, a supermajority of Americans (76 percent to 23 percent, according to Gallup) do not want a ban on private gun ownership.

These facts probably help explain why the has taken a dark turn of late, releasing ads that have virtually nothing to do with gun laws and everything to do with fueling cultural resentment. It's hard for a public policy lobbying outfit to keep membership dues flowing when they've already won.

Meanwhile, anti-gun campaigners cling to the belief that they are a cadre of dedicated pragmatists who merely seek sensible gun-control laws. No doubt there are some who fit this description. But given how the most vocal advocates of gun control tend to get basic facts wrong and have a history of praising countries such as , which all but banned guns outright for normal citizens, it's easy to see why gun-rights supporters are suspicious about what their real goal is.

In 2015, the New York Times ran its first front-page editorial in 95 years to call for, in part, the confiscation of millions of guns. Last month, columnist called for outright repeal of the Second Amendment.

The simple fact is that many elites in places such as and , regardless of ideology (Stephens is a conservative), just don't like guns or the culture of people who do. One can see this in the suddenly pervasive fad -- common in the pages of and on Twitter -- of mocking people who offer "thoughts and prayers" for the victims of mass shootings if they don't also subscribe to sweeping new gun-control measures.

It's a useful thought experiment to ask what America would look like if the gun controllers started to rack up policy victories, confiscating guns from law-abiding gun owners. Aside from the massive financial windfall for the , millions of Americans would have their darkest suspicions confirmed, and the deep resentment already felt in much of "red state" America would intensify beyond anything we've experienced lately.

Perhaps there would be fewer mass murders and other gun deaths -- though I'm skeptical. I'm sure our politics would be far uglier than they already are.