If voting is sacred, early voting must go 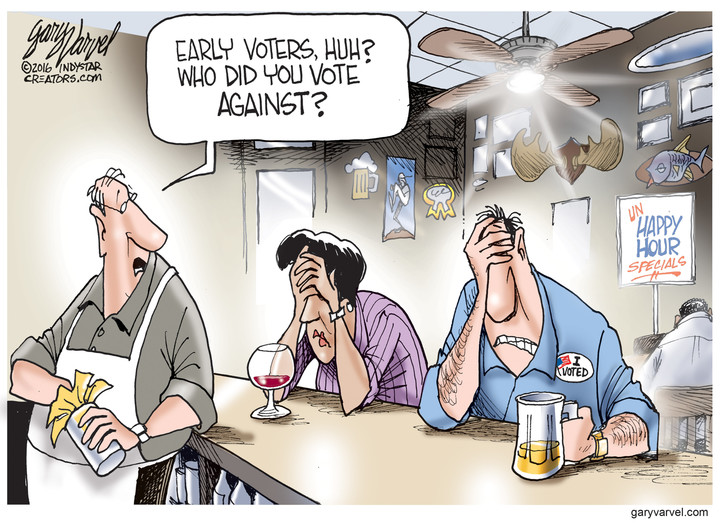 Less than a week before the election, the and reported that the has been under investigation for "pay-for-play" allegations for over a year -- and that the may have been trying to monkey-wrench the effort.

Eleven days before the election, FBI Director announced that he was reopening the inquiry into emails. A few days before that, WikiLeaks dropped a bombshell of a hacked memo showing the full extent of "Clinton Inc." -- the tawdry, tacky and some would argue criminal web of for-profit, nonprofit and political entities that make up the Clinton empire. A couple weeks before that, released a tape of describing how he likes to sexually assault women. Since then, nearly a dozen women have come forward describing treatment that closely tracks the behavior Trump himself described in an unguarded moment.

Those are just the highlights.

Both candidates have also made controversial statements about their policies and philosophies. In the third debate, Clinton refused to support any limitations on even late-term abortions. She also claimed that the longtime gun ban in , ruled unconstitutional by the in the Heller decision, was really just an effort to keep toddlers from getting their hands on guns.

And you know what else happened during all of this? People have been voting. A lot.

Early-voting start times vary by state and often by county. In , people started casting ballots in September. In , voting began just five days after the "Access Hollywood" tape surfaced, three days after the second presidential debate and a week before the final debate. As of this writing, more than 22 million people have voted already. In all, an estimated 40 percent of voters will cast ballots before .

Before you rush to the safety of the usual argument, let me admit that, of course, some early and absentee voting is necessary. Obviously, overseas military personnel and voters with certain disabilities should be accommodated. But defending their right to vote absentee is not a defense of mass-scale early voting.

The standard argument against widespread early voting is that it encourages many people to make their decisions without important information available to the voters who wait until .

That's really not debatable, so early-voting supporters concede the point and then say it just doesn't matter. They note that the people most likely to cast early votes are committed partisans, immune to new facts and information. There's surely some truth to that, but as the scale of early voting increases with each year, it must also be less and less true every year.

Also, one might wonder why people who decry the rise of ideological polarization and partisanship are so eager to make it easier for hardcore partisans to vote.

Comey's bombshell is a perfect illustration of how new facts can make a hash of things. Trump is imploring people who've already cast their votes for Clinton to remedy their "buyer's remorse" and switch to Trump -- which is legal in six states. The problem is worse in the primaries. Voters often cast early ballots for candidates who drop out before . That's real voter suppression.


But my main problem with early voting is different. Every day we hear pious actors, activists and politicians talk about the solemn and sacred duty to vote, and yet everyone wants to make voting easier and more convenient. Many still dream of the most cockamamie idea of all: online voting, so we can make choosing presidents as easy as buying socks on Amazon.

This gets human nature exactly backward. Nothing truly important, never mind sacred and solemn, should be treated as a trivial convenience. Churches that ask more of the faithful do better at attracting and retaining congregants. The Marines get the best and most committed recruits because they have higher standards. Elite schools demand more from students and get more as a result. No wonder one study found that early voting actually lowers turnout because it makes seem like a less special event.

Of course we shouldn't put up any insurmountable obstacles to voting. But if we want citizens to value their vote, why are we constantly lowering the price?