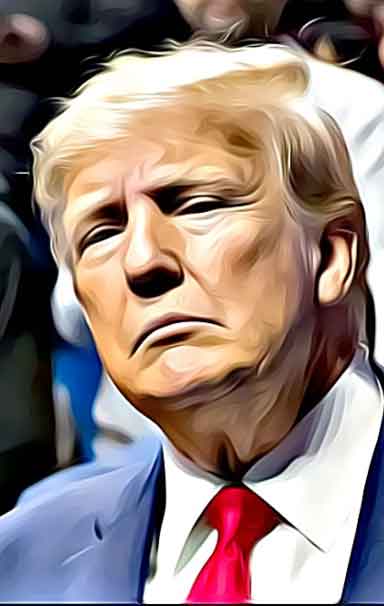 In l'affaire , the president is guilty as charged. And the best strategy for him to avoid impeachment by the House and perhaps even removal by the is to admit it, apologize and let voters make their own judgment. It's also the best way to fend off a disaster for .

The president is accused -- politically, not criminally -- of trying to force the Ukrainian president to tar former Vice President with an investigation into his alleged "corruption" in exchange for the release of military aid and a meeting in the . I believe a plain reading of the rough transcript of a phone call between Trump and Ukrainian President supports the charge. So does testimony from the top American diplomat in , , as well as several other Trump appointees and aides, including Tuesday's testimony from , a staffer who listened to the phone call. There's still due diligence to be done, but it seems implausible they're all lying.

Common sense also works against the president. If Trump were sincerely concerned about Ukrainian corruption, why has he never expressed similar concerns about corruption anywhere else? And, why, if the issue is Ukrainian corruption generally, did the Trump administration focus on the alleged corruption of a single Ukrainian firm, , where Biden's son sat on the board?

The most plausible explanation is twofold. First, the corruption issue was a pretext; under the law, corruption concerns are the only justification for blocking congressionally approved aid. Second, Trump's real goal was to bruise Biden. Indeed, according to Taylor, the said it would settle for a mere statement about Biden's potential corruption -- meaning Trump cared more about political gain than about an actual investigation.

Trump and his defenders are still pounding on outdated, unpersuasive or irrelevant talking points. They rail about the identity and motives of the whistleblower who first aired these allegations, even though the whistleblower's report has been largely corroborated by others. They claim the process of the Democratic inquiry in the House is unconstitutional, which is ridiculous. They insist that hearings where can cross-examine witnesses are a "star chamber" or reminiscent of secret Soviet trials. Also ridiculous.


Republican complaints about the heavy-handed tactics of the have some merit, but they'll be rendered moot when the move to public hearings or to a trial. And when that happens, claims that the call was "perfect" and that there was no quid pro quo will evaporate in the face of the facts.

This is why the smartest Trump defenders are counseling the president to simply admit the obvious: There was a quid pro quo, and the president's phone call fell short of perfection, but nothing he did is an impeachable offense.

As former federal prosecutor (and my old colleague) argues, by insisting there was no quid pro quo, the president made things much easier for . The implicit concession in Trump's position is that if the charges were true, they would be impeachable. That is a burden of proof that no doubt warms the cockles of heart. The smarter course is to admit it happened, but as McCarthy writes, "no harm no foul."

I'd go one step further. Rather than take the Mick Mulvaney line and shout "get over it" -- now a Trump campaign T-shirt -- the president should apologize. Trump's refusal to admit any wrongdoing imperils senators who are already reluctant to defend him on the merits. Once the process complaints expire, they'll be left with no defense at all. fended off removal in the in no small part because he admitted wrongdoing and asked the country for forgiveness. Once he did that, he and his supporters were liberated to say the country should "move on." It's worth recalling that the first existential crisis of Trump's 2016 campaign -- his talk about groping women on the Access Hollywood tape -- was averted by the first, and last, meaningful apology anyone can remember from him.

I disagree with those who say that the allegations against Trump are not impeachable. But, politically, apologizing could forestall impeachment by giving politicians and voters a safe harbor: "It was wrong, but he said he's sorry. Move on." The longer the president defends a lie, the more Americans will resent being lied to.

Of course, contrition doesn't come easy for Trump and would be embarrassing for him and his media cheerleaders. But it would also give Republican candidates a rationale for opposing impeachment that they could sell.

Trump is fond of demanding ever more loyalty from . But loyalty is a two-way street. If he thinks they should defend him, he should give them something defensible to work with.