Ebola is much less scary than Hollywood's 'Contagion.' Or is it? 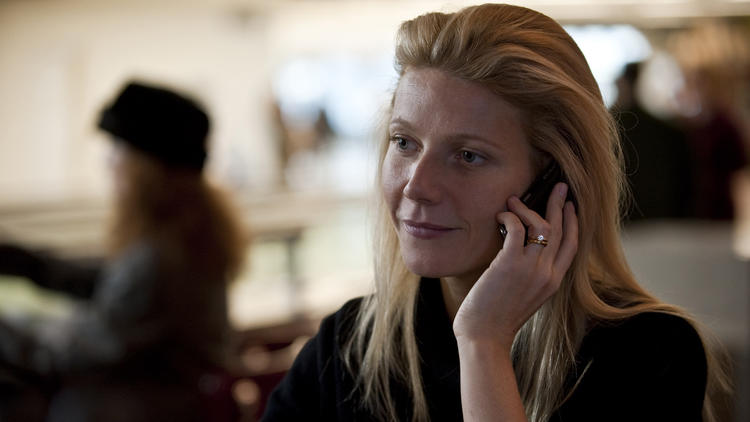 n the film "Contagion," a bat virus finds its way into a pig and then into a promiscuous American played by Gwyneth Paltrow who quickly dies as "patient zero" of a horrifying global pandemic

While disposing of a body in a mass grave, one man in a hazmat suit turns to another and asks, "When did we run out of body bags?"

Fortunately, the scene is only from the movie "Contagion," though it's probably close enough to what is going on in parts of right now.

The 2011 hit about a runaway virus that kills millions has probably come to mind to more than a few people of late as we watch governments struggle to contain Ebola and reassure the public.

So far, real life is much less scary. In the film, a bat virus finds its way into a pig and then into a promiscuous American played by , who quickly dies as "patient zero" of a horrifying global pandemic. Ironically, as America's Ebola patient zero lay dying in a hospital last week, Paltrow was playing herself at a -per-plate fundraiser in her home and lavishing praise on the president. "You're so handsome that I can't speak properly," Paltrow gushed. She also said, "It would be wonderful if we were able to give this man all of the power that he needs to pass the things that he needs to pass."

Even without the aid of a pandemic, Paltrow can deliver a sickening performance.

There have been plenty of movies about deadly viruses running amok. But most involve dark conspiracies, or aliens, or at the very least secret agendas and government corruption. The awful 1995 film "Outbreak" is typical of the genre: Good scientists fight an evil military determined to keep its hands on a biological superweapon at all costs, even if it means killing Americans. (Oh, sorry, spoiler alert.)

"Contagion" broke away from the shackles of the genre. put it well in an essay for , calling it a "pro-establishment thriller." Government officials, the scientists, even the military were all competent and determined to do the right thing.

It was a fascinating departure from the speak-truth-to-power cinema of the Bush years and even paranoia in the Clinton years. (In the movie version of "The X-Files," was a villainous cabal.)

In "Contagion," the only real villain was a blogger, (played by ). He refuses to take the government at its word. He disseminates lies for personal gain. He questions the motives of the mainstream media. At one point a federal agent tells Krumwiede, "If I could throw your computer in jail, I would."


Given the timing, I think it's no accident produced "Contagion." After all, Obama was going to restore faith in government. The smart and decent people were in charge. Under a different president, "Contagion" might have been a paranoid delusion, a la "JFK," and Krumwiede might have been a left-wing hero like or an -style crusader. But under Obama, he had to be more like a cartoonish .

As Obama would tell students in 2013, "Unfortunately, you've grown up hearing voices that incessantly warn of government as nothing more than some separate, sinister entity that's at the root of all our problems. Some of these same voices also do their best to gum up the works." (Fun fact: A few days later the scandal broke.)

Again, under Obama, right-thinking people don't question power like a Krumwiede. They, like a Paltrow, wish the already-powerful "all of the power" they need.

We now have our own version of "Contagion" playing out in real time. The disease is different, of course, and so is the response. Still, I have little doubt that the real-life players at the and are as well-intentioned as their cinematic versions.

But they aren't nearly as reassuring. They keep telling us they know what can't happen right up until the moment it happens. They put the theory of their expertise ahead of the facts on the ground. A nurse contracts Ebola and the experts immediately blame a "breach of protocol" they cannot identify. Loyal bureaucrats rush to blame the lack of a vaccine on budget cuts. Democrats point at Republicans. Republicans respond that the administration diverted billions to lesser priorities.

No one is blaming the bloggers yet. But that might change if the supply of body bags runs low.

The lead investigator and two of his aides say they were put on administrative leave when they questioned what they believed to be a naked political cover-up.

If the allegations are true, we're left with this question: Why did the go to such lengths to conceal the event? Dach broke no laws in Cartagena, the alleged tryst took place in a so-called "tolerance zone" where prostitution is legal. Surely the isn't against tolerance.

There are two likely answers. The first is obvious and laid out in the Post's reporting. The didn't want a scandal in an election year. The second answer, also suggested by the report, is that while Dach was an inconsequential gnome in the massive political operation, Dach's father, Leslie, was a big donor to the Obama campaign. A former lobbyist for , gave in 2008 and worked with "Let's Move!" campaign.

Neither answer excludes the other, and both speak volumes about this problems. The underlying scandal is fairly minor. But if the would falsify records and lie to the public about this, is it really so hard to imagine that it would deceive the public -- and -- about larger issues like, say, Benghazi? (Just this week, former Obama Secretary of Defense told that the infamous talking points on the attack were essentially bogus.)

But it also speaks to the seedy way Obama talks about politics generally. The president loves to denounce a cynical system where politics comes before the public good. He rails about a system where fat cats live by a different set of rules than the little guy, and money buys special treatment and access. But the way he operates runs completely counter to all that. Which is why the only person to come out of this scandal in an honorable light is the Cartagena hooker.