Democratic norms are now weapons rather than guidelines 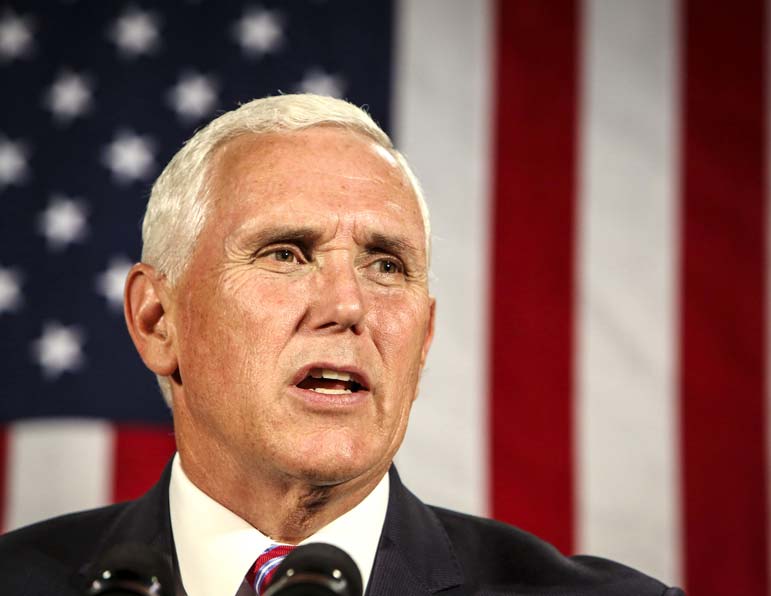 "It was very disappointing to see break with the tradition of former presidents and become so political," Vice President told "Fox News Sunday" host . He was complaining about Obama's broadside against .

Pence has a point. Although it's not unprecedented, it is disappointing to see a former president attack a sitting president.

But for Trump's most reliable defender to invoke tradition -- never mind a tradition of presidential decorum -- as his lodestar is a very strange thing.

Pence went on to defend Trump's criticism of Attorney General for indicting two "very popular" , Rep. of and Rep. of , on the grounds that the violated tradition by bringing charges so close to . (They didn't.)

Pence's shtick, so common among defend-Trump-at-all-costs partisans, is that tradition, custom and norms should be observed by everyone but the president himself. Trump ran as a "disrupter," the logic goes, so he has a mandate to disrupt as he pleases. Everyone else should adhere to the playbook.

Obama was correct when he said that this ugly chapter in our politics "did not start with . He is a symptom, not the cause." I've said the same thing for years now.

For Obama, and for millions of liberals, Trump is the fruition of years of right-wing perfidy. Obama has more of a point than many of my colleagues on the right care to admit.

For instance, I never subscribed to the "birther" conspiracy theory that Trump exploited to such effect, but I failed to appreciate the damage being done by letting it fester.

But Obama also has a massive blind spot that many on the left share. The tit-for-tat dynamic of norm-breaking goes back decades, and Obama has played his part.

When running for president in 2008 and 2012, Obama let his lieutenants demonize and as racists.

In office, Obama violated not just democratic norms but also his constitutional oath by effectively granting amnesty to millions of immigrants living in the country illegally despite having insisted that he did not have the power to do so.

And although Obama was passionate in criticizing Trump's attacks on the news media, his administration was far from pure in this regard.

On both sides, our democratic norms aren't being destroyed so much as turned into cudgels. It's as if a rage virus from a sci-fi movie has broken out and people are grabbing anything -- staplers, coffee mugs, chairs -- that can be used as a weapon.

What's being weaponized in the current crisis are the tools that leaders are normally entrusted to protect: the rules, informal and formal, that should bind everyone. Partisans are breaking them over their knees like pool cues, ever confident that someone else started it.

Last week, violated norms when it published an anonymous op-ed. The author of that op-ed shattered an even stronger norm by announcing that he works for the president yet struggles heroically (in his or her mind) to thwart the president's anti-democratic impulses.

To some extent, administrations have always sought to limit a president's worst instincts (though this one is surely at the extreme), but nobody has ever confessed to it, in print, while still serving. Unsurprisingly, the essay condemning the president's erratic, norm-smashing behavior had the effect of intensifying it.

Trump demanded the turn the author over to the government immediately. He insists the author committed treason, and both he and his cheerleaders clamor for a criminal investigation where there was no crime.

When asked by Wallace about the internal hunt for the op-ed writer, the stalwart Pence dodged the question of criminality, once again falling back on norms. "Every senior official in any administration takes an oath to the ," he said.

"To have an individual who took that oath literally say that they work every day to frustrate the president," Pence went on, "is undemocratic. It's not just deceitful, but it's really an assault on our democracy."

Again, Pence has a point. But he has little standing to make it.

The author of the op-ed may have taken an oath, but the president took an oath too. Falsely accusing critics of "treason," castigating law-enforcement agencies for prosecuting allies, and telling police they should rough up suspects is inconsistent with Trump's oath -- and Pence's.

But these days, oaths, like norms, are for everybody else.