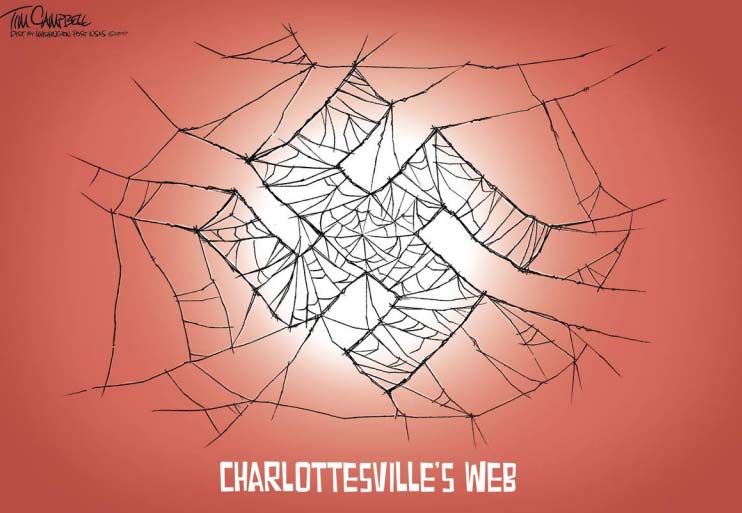 Last year around this time (and the year before that), I was arguing with some of my fellow conservatives about the insanity of finding any common cause whatsoever with the so-called alt-right. The issue wasn't that every avowed nationalist who claimed membership in the alt-right was a Nazi or Klansman. It was that the alt-right was open to Nazis and Klansmen. And why wouldn't these newly minted white supremacists welcome such pioneering organizations to their cause?

Right-wing cynics, hucksters and opportunists deliberately blurred these distinctions in the name of a right-wing popular front. , now a consigliere, is by most accounts not a bigot in his personal dealings. But when he ran Breitbart.com, he had no problem making it a "platform" for the alt-right. entertainer was a Breitbart star for his defenses of the alt-right and its supposedly hilarious Holocaust jokes. He was only let go (and disinvited from the ) when it was revealed he was equally broad-minded about some expressions of pedophilia as he was about some expressions of Nazism.

In Bannon's case, and in the case of so many on the right who pulled their oars to the beat of Bannon's drum, the motivation wasn't racism or anti-Semitism; it was the need to win at all costs (or to make a profit).

Win what? Well, that varied. At first it was the war on the "establishment," including . Then one alleged civil war on the right or another. And, ultimately, the fight to get the nomination and the presidency.

As the primaries wound down, the imperative for unity intensified. Why look under rocks when you can use them as stepping stones to victory? Besides, Trump was making it as clear as possible that he welcomed support and praise from any quarter.


The right's game of footsie with the alt-right ostensibly ended when Trump won. Bannon disavowed them once he made it to the . Like after the liberation, it seemed everyone was suddenly a member of the resistance and nobody was a collaborator. At least, that is, until Saturday, when the president invited speculation that the old popular front is still operational.

Whatever its status at the , the alt-right thinks it will replace the traditional right. It won't, for the simple reason that the vast, overwhelming majority of conservatives are patriotic and decent, just like Americans generally. They don't want anything to do with people who want to overthrow the and set up racial Bantustans.

No, the real threat to traditional conservatism is the mindset that made it possible to form even a theoretical alliance with the alt-right in the first place: the idea that winning and fighting are self-justifying.

Over the last decade, many on the right have convinced themselves that the real problem with conservatism is a lack of will. They admiringly quote left-wing activist admiringly and claim that "we" have to be like "them" by doing whatever is necessary to "win."

During the campaign, when Trump attacked the ethnicity of an American judge or the parents of a fallen Muslim soldier, the response from his defenders on the right was usually, "At least he fights!"

Such amorality was warranted, many explained, because if Clinton had won, America would be "over." National security official , then writing from the safety of anonymity, dubbed it a "Flight 93 election" and argued that conservatives must do anything for victory or accept certain death. In an interview with , Anton went further. "If we must have Caesar," he said, "who do you want him to be? One of theirs? Or one of yours (ours)?"

The election is over. Yet that spirit not only endures, it has intensified. Trump's conservative critics, or "apostates" as calls us, face the same ultimatum. "The choice, for sane conservatives," Black writes, "is Trump or national disaster." Black is hardly alone in making this or similar cases. The upshot of them all is that the test for "sane" (or real or good or true) conservatives is loyalty to the president, not to any coherent body of ideas or ideals. Even truth takes a back seat

I'd point out that such thinking could invite the worst and most opportunistic creatures to infiltrate the movement. Except they already have.