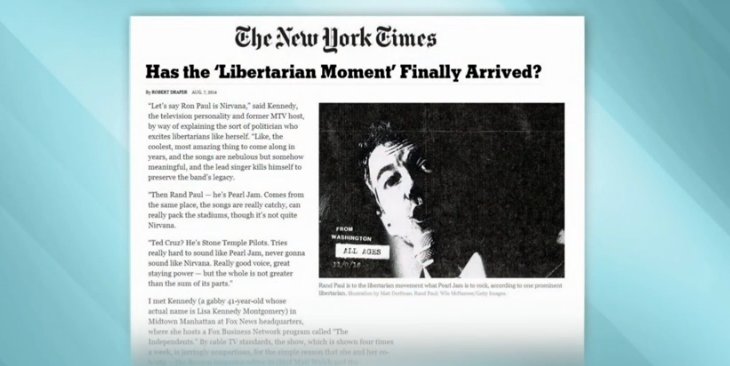 There's an old rule in journalism: All you need are three good examples to prove a trend.

And by that measure, writer had more than he needed to declare a new "libertarian moment" in American politics. In a cover story, Draper made exactly that case. His chief evidence: Young people are more libertarian today, and libertarian ideas are having a renaissance on the right. Also, self-described "libertarian-ish" Sen. star is on the rise, thanks in part to national exhaustion with foreign interventions. Plus: recent victories for legalized weed and gay marriage.

All of these things are largely true, but Draper is still wrong, or at least not quite as right as he (or for that matter, I) would like.

As liberal writer notes, much of the polling showing that young people are libertarian has been done by organizations eager to find that result. So while it is true that young people are more "libertarian" on social issues and foreign policy, they are also more progressive on the role of government. Pew finds that 53 percent of millennials favor "bigger government." Meanwhile, Chait writes, "older Americans oppose 'bigger government' in the abstract by a margin of some 40 percentage points. That young voters actually favor 'bigger government' in the abstract is a sea change in generational opinion, not to mention conclusive evidence against their alleged libertarianism."

On the other hand, it's also true that young people are more libertarian than ever before. How can that be? Lots of reasons. I'll give you three. First, as The Federalist's points out, the millennials are the biggest generation in American history. Ideologically, it contains multitudes. It can be collectively more socialist while still containing more libertarians than ever before.

Second, it's the most diverse generation in history, and non-whites (young and old) favor bigger government by wide margins. A slim majority (53 percent) of white millennials want less government, according to Pew, but a huge majority of non-white millennials (71 percent) want more government. Make of that what you will.

Last, not only is the millennial generation collectively inconsistent, most individual young Americans are inconsistent, too -- just like everyone else.

Ideologically consistent libertarians -- i.e., people who want freedom across the board -- are very vocal, but they are far from legion. And even among the faithful there is still considerable disagreement about issues like abortion or drug legalization beyond marijuana. In principle most Americans simply want government to do good where it can and do no harm anywhere else.

Moreover, people want to maximize freedom in the abstract, but they are loath to pay much of a price for it in their own lives (hence the famous 1964 finding by social psychologists and that Americans are operationally liberal but ideologically conservative).

I wish it were otherwise, but people tend to be libertarian only after it's demonstrated to them that the government can't deliver the results they want.

And that, I think, is the elephant in the room Draper largely misses. Example is the school of mankind and they will learn at no other, observed. What he meant was that you can't just tell people X won't work; they have to see and experience the failure of X on their own. Noam Chomsky didn't suddenly become more persuasive during the Bush years. The reality of the war turned people off military interventions.

To the extent that libertarian ideas are gaining new currency outside the , it's because of government's failures. Particularly for young people -- especially more affluent young people -- the yawning chasm between the efficiency of the private sector and the haplessness of the public sector is poisonous to faith in government. The VA scandal, the clownish rollout of the Obamacare website and the near wholesale inability of to deliver on his economic promises have done more to breathe new life into libertarianism than a thousand lectures about "Road to Serfdom" ever could.