Trump 's warm welcome in Middle East is no surprise 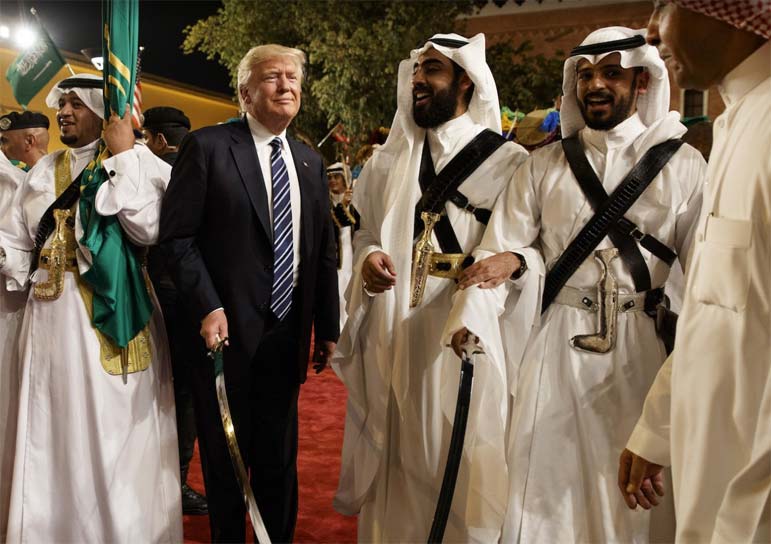 "We just got back from the ," President Trump said to the president of after his flight from , to , which is also in the .

As Trumpisms go, this one is easy to forgive, particularly given how exhausted the president must have been after a weekend of jet-lagged diplomacy, (non-alcoholic) bacchanalia and sword dancing. But it does speak to a larger truth. The president was a stranger in a strange land, a region of ancient conflicts and complex political intrigues.

We have seen the president struggle with the "swamp" in . Well, if is a swamp, then the is the Everglades, and the alligators rolled out the red carpet.

The king of greeted Trump at the airport, a gesture ostentatiously denied President Obama. On the drive from the airport the streets were lined with American flags and Trump's face was beamed onto the side of a building.

At the summit, , the authoritarian leader of , invited the president to visit his country, adding, "You are a unique personality that is capable of doing the impossible."

Trump replied, "I agree," to diversely interpretable laughter. He also returned the compliment. "Love your shoes. Boy, those shoes. Man!"

In short, the Arab leaders, hardly inexperienced in lavishing praise on men who crave it, have the president's number. Of course, they were given some guidance in this regard. According to New York Times reporter , officials offered some tips on how to deal with the American president.

"Keep it short -- no 30-minute monologue for a 30-second attention span," Baker summarized. "Do not assume he knows the history of the country or its major points of contention. Compliment him on his victory. Contrast him favorably with President . Do not get hung up on whatever was said during the campaign."

These last two points are key. The success -- so far -- of the president's trip stands on the ashes of Obama's failures. It's easy to forget that for all Obama's alleged expertise, his foray into the foundered on his arrogance and naivetĂ©. In his 2009 speech, he unspooled clichĂ©s as wisdom, thinking that his name alone would put points on the board. He bought into the idea that the road to stability and peace in the went through .

As Obama learned on the job, he came to believe that the road to peace went through , crafting an Iranian deal that alienated both our democratic ally and our strategic Sunni allies, chief among them . In pursuit of his fantasy, he turned a blind eye to crushing of the Green Revolution and dithered to the point of complicity in the Syrian abattoir. Meanwhile, remains as implacably hostile and as determined to be a regional hegemon as ever.

That is the context of Trump's fawning reception. "Welcome, President Not Obama!"

During the campaign, Trump railed against Muslims, indicted the Saudis as the architects of the 9/11 attacks and said (with more than a little accuracy) that the Saudis want to keep "women as slaves and to kill gays."

In his speech on Sunday, Trump flip-flopped to a somewhat more elevated realism. He said America wants "partners, not perfection" and that he didn't come to "lecture" anybody, hence the refusal to mention anything that rhymed with human rights or democracy.

Which brings me back to Trump's naivetĂ© when it comes to the .

He manfully called for the destruction of terrorists, but he talked of them as if they were foreign invaders to be driven out of the swamp, not products of it. Like the man who only has a hammer and therefore thinks every problem is a nail, Trump believes that the problems can be solved with terrific "deals." The Saudis, eager to buy weapons and counter , are all too eager to encourage this view. What alligator doesn't want sharper teeth?