De Blasio is the Ferris Bueller of Dem presidential candidates 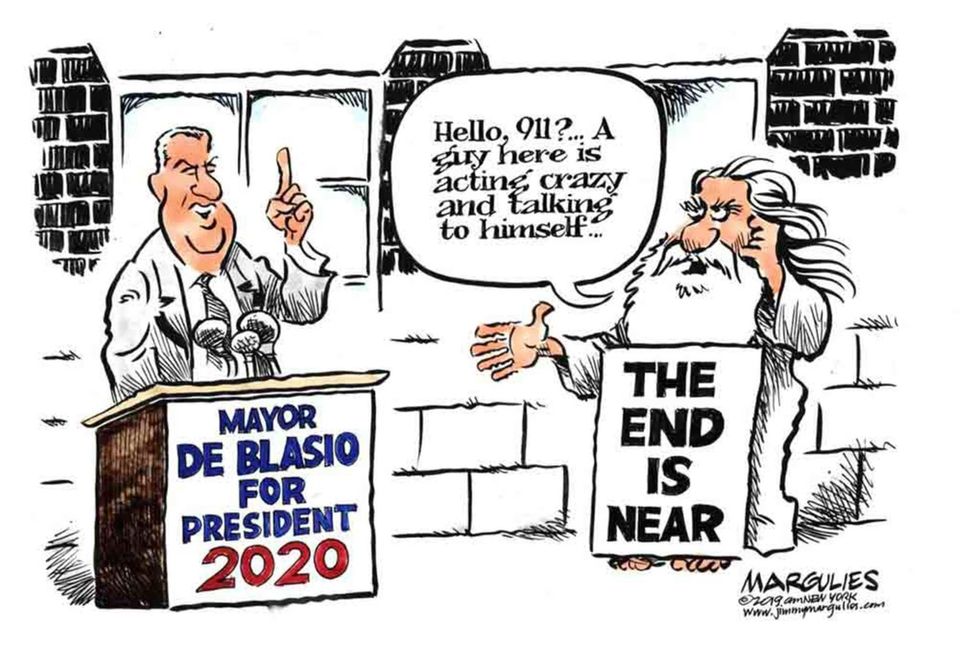 The most rational response to the news that Mayor wants to be president is to ask, "Of what?"

When informed that he wants to be president of and not of, say, the local organic hemp co-op, perhaps the next best response would be to take a page from the South and say, "Bless his heart."

One of the more charming things about de Blasio is his amiable lack of self-awareness. He seems to have no idea that he doesn't impress anybody. The obliviousness is somewhat understandable. He did get elected -- twice. But his victories have more to do with the dysfunction of politics than any strength on his part.

In 2013 he won the Democratic primary -- which assured victory in the fall -- in the lowest election turnout in decades. After 3 percent of New Yorkers voted for him, he saw a landslide.

He must bring a similar perspective to his poll numbers. According to a survey released this month, 76 percent of New Yorkers don't think de Blasio should run for president -- and it's not because they're desperate to keep him on the job.


It was famously said of that he was the kind of guy who was born on third base and thought he'd hit a triple. This was always more than a little unfair to the elder , given that at 17 he signed up to become one of the youngest combat pilots in the Pacific during World War II and went on to work harder at politics and public service than arguably any president since (with the possible exception of ). But the barb drew blood because it sounded clever and exploited the always reliable American resentment against affluent political dynasties.

The same dynamic isn't at work with de Blasio. He didn't grow up poor, but he didn't grow up rich either. Politically, he is the consummate example of someone born -- or in this case elected -- on home plate who can't understand why no one in the stands is cheering his home run. When he was poised to win re-election, he was asked by why he wasn't more popular. He admitted that he was somewhat mystified. Given the strength of the economy and the low crime rate, "You'd assume they'd be having parades out in the streets" in his honor, he said.

They're not, because he is a Ferris Bueller. In the movie "Ferris Bueller's Day Off," Ferris () jumps out in front of a parade and acts like he's leading it. De Blasio inherited the successes of and , two mayors who wrestled the city back from the brink of social and economic collapse.

"De Blasio's record as mayor doesn't have a policy theme," writes in City & State New York. "It's just a mishmash of half-executed ideas that add up to a city little different than it was before he got here. Even his biggest accomplishments, rather than striking out in a bold new direction, are building on existing trends."

Worse, de Blasio takes credit for the successes of his predecessors on crime, poverty and the economy but refuses to take responsibility for the growing problems on his watch, from abysmal mass transit to an exploding homeless population.

And that points to the real problem with de Blasio: He's lazy. He's famous for being asleep on the job -- literally. He often oversleeps, arriving late for important events such as funerals or, in one case, an event in his own residence. "Some voters have a perception that he has an up-at-the-crack-of-noon attitude," political strategist told the .

This laziness isn't just physical but intellectual. Like the president of a college chapter of the Young Socialists, de Blasio is the sort of politician who thinks rolling out of bed and announcing something is the same thing as doing something, that boldness in rhetoric is a substitute for boldness of action. New Yorkers -- even very liberal New Yorkers -- see that.

Still, it makes sense that de Blasio is running, because in a field of 24 (and counting) contenders, and with no future political prospects in his home state, he's got little to lose. He can raise money from rubes who haven't been burned already, get on a bunch of TV shows, and -- who knows? -- he lucked out before. Maybe he'll stumble to the front of another parade.