If Dems crave return to 'normalcy,' why are their candidates so radical? 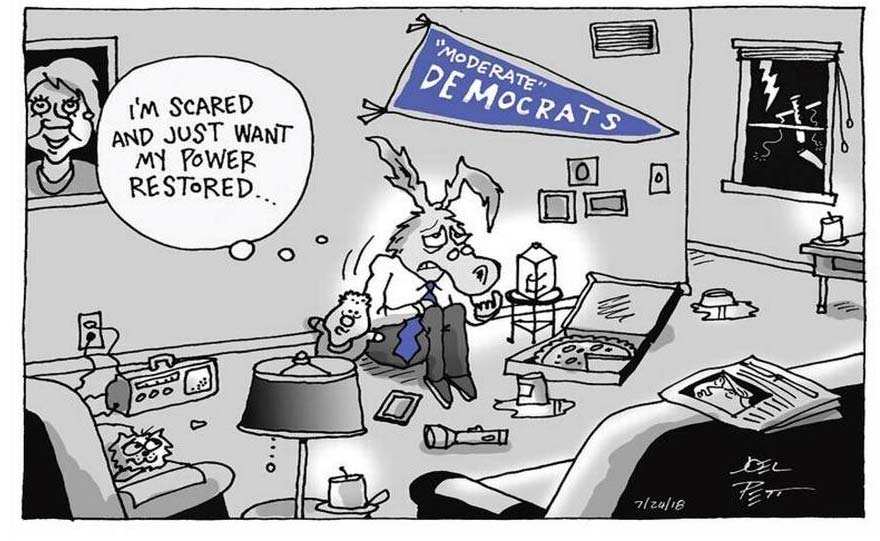 In the 1920 presidential election, won in a landslide by promising a "Return to Normalcy." Today's would be wise to make that same pledge for 2020. They probably won't, however, which is why might get re-elected.

Harding's concept of normalcy has been ridiculed and reviled by progressives and liberal historians for 100 years. Some falsely claim it was merely a call for a return to the isolationism of the prewar years. But Harding wasn't just tapping into the unpopularity of the First World War; He also spoke to Americans' worries about the widespread domestic turmoil and tumult of the Progressive Era. Race riots, labor violence, anarchist terror bombings, the Red Scare, Prohibition, widespread censorship, political oppression and mass arrests were also on voters' minds.

Nothing in the last two years -- or two decades -- approaches the turmoil of the Woodrow Wilson administration, but that doesn't change the fact that a lot of Americans feel like they've been through the wringer. That feeling has defined our politics for a long time -- from the Clinton scandals to the Iraq War to the financial crisis and the fights over Obamacare -- bringing us one "change election" after another. But politicians often seem to miss that the change many voters are looking for is a reversion from the abnormal to the normal.


Given the roaring economy, with near full employment and rising wages, a normal president would lie back and avoid fueling the unease that has kept Trump from breaking through the 50 percent approval ceiling. But he is clearly incapable of doing that, which creates an opportunity for to win despite a healthy economy.

seized such an opportunity in the 2018 midterms. The president's constant trolling of the political and media establishment is music to the ears of his biggest supporters, but it is an unsettling and deafening din to the most important constituency in American politics: the vast, mostly moderate middle.

While activist firebrand freshmen (freshpersons?) such as Reps. (D-N.Y.) and (D-Minn.) get all the attention from both the liberal and conservative press, most of the elected in the 2018 landslide were moderates from purplish districts that will decide the 2020 election. They ran on health care and other issues, but also on the promise to be a check on Trump's "abnormalcy." Promising to turn down the political temperature, reducing not just the drama of but the centrality of it in our lives and conversations, would still leave lots of room for a Democrat to advance his or her agenda.

Right now, is the only major Democratic presidential contender who seems both interested in and capable of pursuing such a strategy. The rest of the field seems to think that Twitter likes and retweets will count as primary votes, and that there's an appetite in the country for left-wing radicalism on a par with what they see as Trump's right-wing radicalism.

Rather than vow to keep the economic boom going while returning to normalcy and enacting reasonable reforms with bipartisan support, they talk about socializing medicine, making slavery reparations, forgiving student loans, banning guns through executive orders and implementing a Green New Deal. And the media obsess over impeachment.

All that stuff is super-popular with young, college-educated activists and journalists, all of whom are wildly overrepresented on social media.

But most belong to what calls the "hidden Democratic Party." Enten notes that a majority of are over the age of 50, at least half call themselves moderate or conservative, and a majority don't have college degrees. Biden's lead in the polls is explained almost entirely by his support from older .

Moreover, many blacks and Latinos -- crucial to the Democratic coalition -- aren't nearly as "woke" as progressives often assume they are. They often have a more pragmatic and transactional view of politics, for a slew of reasons. Even Ocasio-Cortez underperformed with blacks and Latinos, defeating the incumbent Democrat by running up tallies from richer and whiter precincts.

The college-educated barista socialist constituency dominates in states the will win no matter what. But the battleground will be in states that narrowly went for Trump. Biden, a logorrheic and gaffe-prone 76-year-old with a terrible track record in presidential contests, is best positioned to beat Trump, but first he has to survive the death by a thousand tweets the vocal minority has in store for him.