The president is this presidency's worst enemy 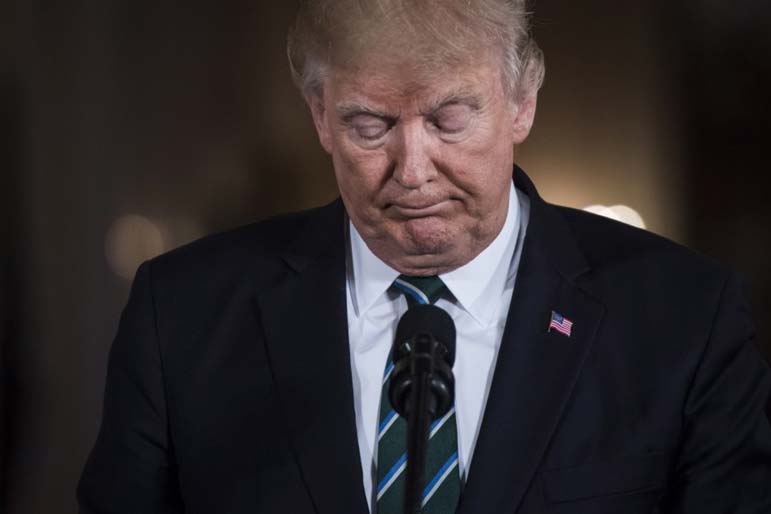 The conservative commentariat is full of suggestions these days for how can salvage his first 100 days.

, the organizer of "Scholars and Writers for Trump," writes in the that the president should "split" the , align himself with and embrace Canadian-style single-payer health care.

of says Trump should get a brain trust that can guide him on the right policies, since he seems not to have many of his own.

Similarly, my colleague (well, boss) penned a widely discussed piece for , "The Crisis of Trumpism," in which he argued that Trump's basic problem is that he has no idea what he wants to do or how to get it done. "No officeholder in ," Lowry writes, "seems to understand President populism or have a cogent theory of how to effect it in practice, including the president himself."

These and other constructive criticisms all strike me as reasonable (except for that Canadian health care thing, which is bonkers). But they're misdiagnosing the malady at the core of the Trump presidency.

In the months after he secured the nomination, Trump and his surrogates promised skeptics that he would not be a hands-on policy guy. Instead, he'd rely on congressional leadership and, later, to do the major lifting, while the president would go around giving speeches to Make America Great Again.

Douthat is right that Trump could use a brain trust. But some of us were told that Pence or or would serve that role. Certainly they've tried. Moreover, there are countless policy agendas sitting on the shelf for Trump to choose among.

Why so much chaos, then? A common answer you hear from all corners is "the tweeting" -- the horrible, horrible tweeting. But when you talk to people with more hands-on experience in, or with, the , the better answer is that the tweeting is just a symptom.

Trump brings the same glandular, impulsive style to meetings and interviews as he does to social media. He blurts out ideas or claims that send staff scrambling to see them implemented or defended. His management style is Hobbesian. Rivalries are encouraged. Senior aides panic at the thought of not being part of his movable entourage. He cares more about saving face and "counterpunching" his critics than he does about getting policy victories.

In short, the problem is Trump's personality. His presidency doesn't suffer from a failure of ideas, but a failure of character.

For the last two years, when asked how I thought the Trump administration would go, I've replied, "Character is destiny." This wasn't necessarily a prediction of a divorce or sexual scandal, but rather an acknowledgment of the fact that, under normal circumstances, people don't change. And septuagenarian billionaires who've won so many spins of the roulette wheel of life are even less likely to change.

It's true that Trump has racked up some wins -- a few relatively easy executive orders and the Supreme Court nomination of , who'll wind up taking the late seat one way or another.

Good news is not defining his term, though. Trump's off-the-cuff claim that President Obama "wiretapped" him ate up a third of his first 100 days and hurt his standing with allies and voters alike. If you believe that this was some brilliant 4-D chess gambit hatched at Mar-a-Lago, you must believe that plummeting to 35 percent approval was part of the plan, too.

The president is this presidency's worst enemy, and there's no sign of improvement ahead.

Trump detests apologizing or expressing regrets for his actions. He'd rather just change the subject or attack. He likes demanding that other people apologize for the same reason that he won't: He sees admitting error as a personal defeat.

But in politics, apologizing is a way to ask for a fresh start, not just from others but from yourself. If he apologized for his rocky start and asked for a do-over, Trump could replenish some of his squandered political capital. I hope he does, but I won't bet that way because, again, character is destiny.