Reaction to Bernie's candidacy shows a shift within Dem Party 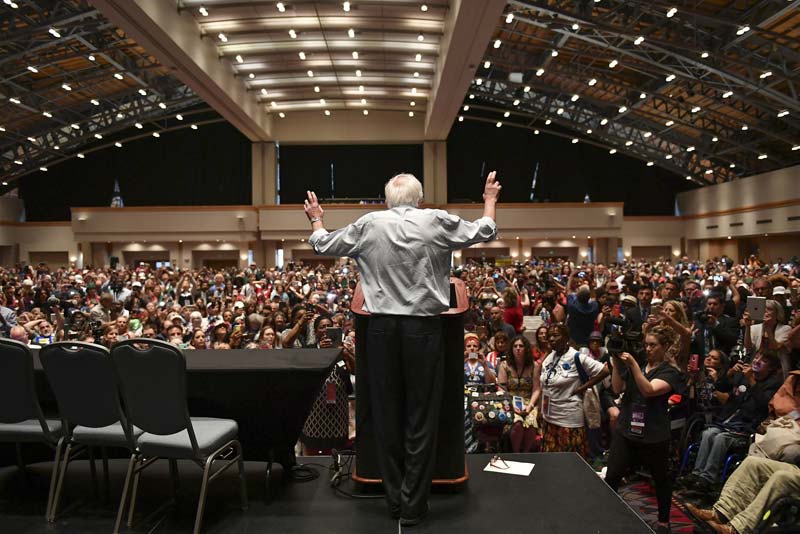 I'm old enough to remember a time when an independent secular Jewish socialist with a long record of support for communist regimes would be considered a force for diversity in a typical field of Democratic candidates. Think back to years past, when the likes of , , , and other white men vied for the Democratic presidential nomination. If you threw a into that mix, you might have been forgiven for saying, "One of these is not like the others."

Sanders, the aforementioned socialist who never saw a communist junta he didn't like, announced he's running for president again.

In an interview with (of course), Sanders was asked how he would compete in such a diverse field.


"We have got to look at candidates, you know, not by the color of their skin, not by their sexual orientation or their gender and not by their age," Sanders replied. "I mean, I think we have got to try to move us toward a non-discriminatory society which looks at people based on their abilities, based on what they stand for."

The reaction from many quarters of the liberal establishment was fit for a novel. The LGBT magazine Out ran the sardonic headline, "Bernie Sanders Bravely Asks Us to Consider a Straight President." , the head of the , sneered, "At a time where folks feel under attack because of who they are, saying race or gender or sexual orientation or identity doesn't matter is not off, it's simply wrong."

, a middle-aged white guy whose TV show is a mandatory stop in the Democratic primaries, did a Sanders impersonation, saying, "Yes, like , I have a dream -- a dream where this diverse nation can come together and be led by an old white guy."

For generations there's been a schism on the left between those who argue that class and economic equality should be the dominant prism for social and political reformers and those who say that race and identity should be the primary consideration. It can be traced back to the rich, fascinating history of American socialists and communists taking the lead on civil rights in the 1930s and 1940s, when mainstream parties turned a blind eye to Jim Crow.

It's a complicated story, but it's worth acknowledging both the real moral leadership on these questions by many on the left and the fact that much of it was driven by the useful idiocy of American leftists who bought into Soviet and Marxist propaganda. The great socialist intellectual once praised the for its "progressive elimination of national, cultural and racial hostilities among its heterogeneous peoples," which had been achieved "voluntary participation in a socialist economy" and "not by suppressing national units or indigenous cultures." He later recognized that this was nonsense.

Regardless, the idea of colorblindness -- now considered code for "white supremacy" by many liberals -- has a rich and noble pedigree on the American left, most famously articulated by . in his March on speech, which Sanders attended.

But suddenly, Sanders' political radicalism is eclipsed entirely by his whiteness and maleness. This is partly because so much of the Democratic Party has adopted his policy positions, he no longer stands out the way he did just two years ago. Still, it's a remarkable change, made all the more remarkable because it's mostly an elite liberal phenomenon.

There's little evidence that average , including minorities, care as much about the demands of wokeness as the liberal talking heads on TV claim. For instance, a majority of African-American Virginians do not want Gov. (of blackface infamy) to resign.

Even , the face of the new, socialist, ethnically diverse Democratic Party, owes her upset election not so much to allegedly socialism-craving people of color but to more affluent white liberals. As noted, , the old white male Ocasio-Cortez defeated in the primary, did quite well with blacks and Latinos, whom Crowley had served ably for years, while Ocasio-Cortez's best margins came from "highly educated, whiter and richer" precincts that could afford to virtue-signal at the ballot box.

If that pattern holds, the forces of class over identity may not be as defeated as it once seemed.