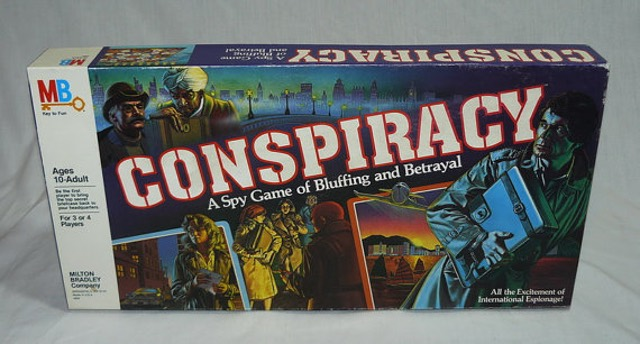 Despite the indictment of 13 Russian professional social media pranksters who worked to tip the 2016 election to , I remain somewhere between skeptical and agnostic on the question of whether or not Trump knowingly and secretly colluded with the Russians to win the election.

We'll come back to those important qualifiers -- knowingly and secretly -- in a moment.

But first, a word about conspiracy theories: As a rule, they will almost always let you down.

The conspiracy theories that capture our imagination usually depend on false assumptions about how the world works. They rely on the idea that government (or some other large organization) is both profoundly evil and profoundly competent, particularly at keeping secrets. Sometimes the former may be true, but the latter virtually never is. Conspiracy theories also rely on the belief that objectively bad outcomes are subjectively intended. It's like trying to read the world like a work of literature, where all actions foreshadow future events.

That's why I tend to avoid conspiracy theory in favor of what one might call character theory. Character is destiny, as Heraclitus observed, and it serves as a far more reliable guide than feverish dot-connecting of disparate events.


It is character that leads me to think he didn't do it, at least not in a way the impeachment-hungry mob hopes he did.

Oh, I think he's morally capable of having done it. As a candidate he publicly called on the Russians to (further) hack server and release the missing emails. He is the one member of his administration incapable of condemning Russian President or his regime. Indeed, his instincts are to hail Putin's "leadership."

Nor do I think Trump surrounded himself during the campaign with people who would have talked him out of collusion (save for then-Sen. ). Saying that his former campaign manager, , is not overly scrupulous would be a mind-bending understatement. And Trump's son . has already admitted a) that he met with a Russian emissary, and b) that he didn't care where anti-Clinton dirt came from.

But while they may have been willing to coordinate with the Kremlin, I'm not at all certain they would have been able to pull it off -- and keep it a secret. Everything we know about the Trump campaign is that it was a shambolic movable feast of warring egos, relentless leaks and summary firings. But we're supposed to believe that everyone maintained total secrecy about Russian collusion?

More implausible, we're supposed to believe that Trump has never let it slip, in private or public? The man admitted he fired FBI Director to thwart the investigation. Indeed, his blunders are what invited the investigation in the first place.

So why, you might ask, is Trump so obsessed with stopping , the special counsel leading the probe? I have three mutually reinforcing theories.

First: Trump thinks the probe is unfair. He knows he didn't personally collude and feels unjustly accused. Second, it's a blow to his ego, because he thinks it robs him of credit for what he believes was a landslide victory. (It wasn't.) And third, he fears Mueller might find something else. Perhaps Trump's not nearly as rich as he claims. Maybe his business practices (or those of his family), particularly with regard to , would not withstand close legal scrutiny. One explanation for why Trump always flattered Putin on the campaign trail is that he thought he would lose the election, so why foreclose future business opportunities?

Former strategist matter-of-factly told author : "This is all about money laundering."

Mueller's "path to ... Trump goes right through , . and ," Bannon added. "It's as plain as a hair on your face." Tellingly, the president has said he might fire Mueller if he looks into his family's finances.

These three factors add up to an explanation for why Trump insists the whole investigation is a witch hunt and why he can't stop obsessing over it. It's not the only explanation, but it's more consistent with what we know of Trump's character than the current conspiracy theories, which depend on us believing he's a villainous mastermind.