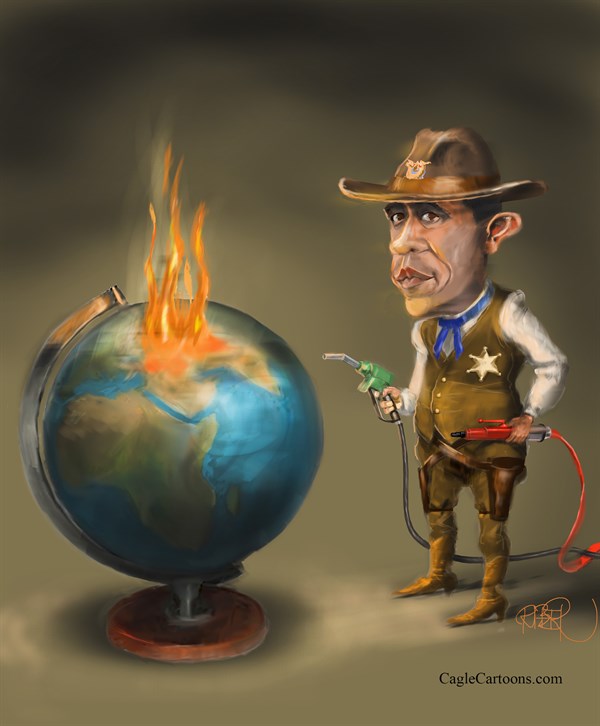 We get it already. The war was a mistake.

Indeed, on this point pretty much everyone agrees. , the brother of the president who launched the war, has said so. So has , the only presidential candidate in either party to have actually voted to invade (though she refused to admit her vote was a mistake until fairly recently).

The only disagreements on the Republican side are about the degree and nature of the mistake. Catch in a glandular moment and he'll say that knowingly sent thousands of Americans to their deaths based on a lie. Ask Trump when he's in a more mature mood -- or when he gets bad press for his slanders -- and he'll say he doesn't know whether it was a lie.

The other candidates agree that it was a mistake in hindsight, though most say, rightly, it was defensible at the time. Indeed, some of us believe that we could have turned a mistake into a success had not been in such a hurry to squander the hard-won victories of 's surge.

On the Democratic side, there's a lot less nuance. Sen. insists that Clinton's vote for the war is all you need to know about her foreign policy judgment. Clinton's reply is, "One vote in 2002 is not a plan to defeat ISIS."

Clinton is right, of course. But at this point, plans are less important than the will to put them into action. I suspect there's no shortage of plans to get the job done sitting in Obama's inbox. What's missing is a presidential commitment to implementing them.

But ISIS is just one of our problems. Obama's own director of national intelligence, , told the last week that we now face "the most diverse array of challenges and threats that I can recall."

By no means is it all Obama's fault. problems, for instance, are a poisonous mix of religious extremism and medieval political arrangements temporarily sustained by an ultimately unsustainable economic model. Similarly, Vladimir Putin has had his eyes on restoring the grandeur of imperial for decades. burgeoning nationalism has been baked into the political and demographic cake for even longer.

But these and other challenges have all been made worse on Obama's watch. seized Crimea and declared an unofficial war on . has only grown emboldened in the face of American lassitude. Just this week, deployed new missile systems to one of its manmade islands in a disputed region of the while Obama was holding his summit in . The insult was not subtle.

Obama's deal, crafted unilaterally as an end-run around , has started a Middle Eastern nuclear arms race and caused our longstanding allies in the region to question our reliability. To date, there's no evidence that has abandoned its role as a terrorism sponsor, its quest for nuclear weapons or its goal of becoming a regional hegemon.

Before that, Obama's decision to renege on our missile defense commitments to our allies sent a similar signal to friends and foes alike.

We can debate how much blame Obama deserves for civil war, but almost no one outside his paid staff disputes that he's only made things worse. The conflict there has set off the worst humanitarian crisis in since the end of World War II -- that's own assessment -- which may yet tear the asunder.

The instability closer to the fighting is even more dangerous. and may soon go to war with each other, as mercilessly and indiscriminately massacres anyone standing in the way of its pet, Syrian President . The Jordanian monarchy may crumble, in part for a lack of assistance from .

And yet, the gravity of the situation has yet to enter into the presidential contest in a serious way. As a co-author of Obama's disastrous foreign policy, has no interest in calling attention to the global catastrophes unfolding around us. doesn't want to talk about anything he can't blame on billionaires, and doesn't want to talk about anything other than his poll numbers, his insults and the fraudulent claim that he predicted all of this before Bush launched the war in .

It's time to take these things seriously, before it's too late.