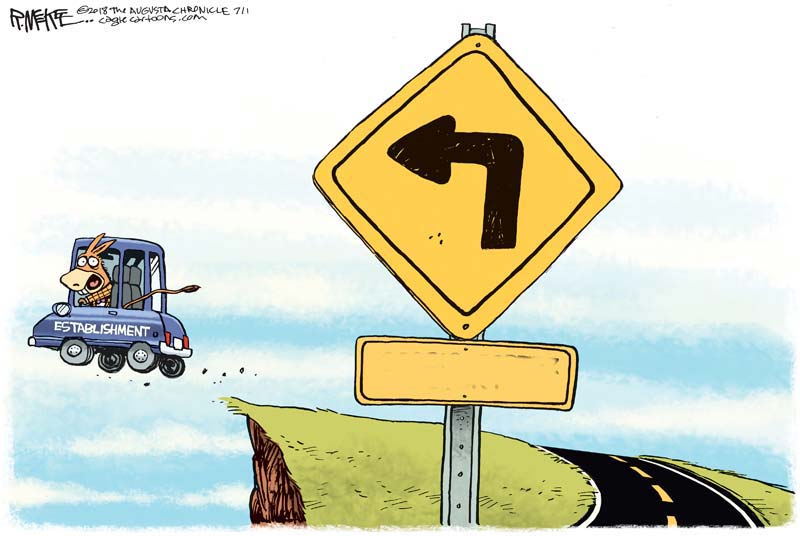 can't win in 2020 but the can lose, and they seem determined to give it their best shot.

Straight-line predictions are the undoing of every pundit and prognosticator. But it seems safe to say that if present trends hold, has no path to winning a majority of the popular vote.

In 2016, Trump lost the popular vote by more than 2.8 million ballots. He carried the by very narrow margins: about 10,000 votes in , 22,000 in and 45,000 in . In January, according to Morning Consult, Trump's approval ratings in these states were 40 percent, 40 percent and 43 percent, respectively. An //Marist poll last month found that 57 percent of Americans say they will vote against Trump while a mere 30 percent said they will definitely vote for him. He is underwater in a slew of states any Republican needs to win, and he has never once broken 50 percent in approval ratings nationally.

Just going by the numbers, barring a compelling independent candidacy of someone likely to siphon votes from the Democratic column, it seems impossible for Trump to get re-elected.

Of course, it's not impossible, because we never get to the future as the crow flies. In the heat of an election, many Trump-skeptical and Republican-leaning voters will come home. But if that happens, it almost surely won't happen because Trump moderated his behavior.


If the president could pivot to a more "presidential" persona he would have done it already. When British Prime Minister was confronted with calls to turn away from her market-liberating reforms, she famously declared, "The lady's not for turning." Trump, while a very different kind of leader, could give a speech declaring, "The man is not for pivoting."

So, the only variable in the binary presidential election lies on the left side of the ledger. If the present a face that is scarier than the reality show of the previous four years, many Americans could vote against the rather than for the .

That process is already starting. , a prominent "Never Trump" conservative in 2016 and a Trump critic since then, announced on Monday that he will be voting for Trump in 2020.

would be wise to pay attention. Erickson hasn't suddenly fallen in love with Trump; he's grown decisively horrified by the . And I can't blame him. Just last week, unveiled the Green New Deal, a wild-eyed fantasy of an agenda that would cost trillions, destroy whole industries and serve as a Trojan horse for socialism.

Not long before that, Sen. (D-Calif.) cavalierly admitted that "Medicare for all" would wipe out the insurance policies of more than a 100 million Americans. She has done some backpedaling since, but other leading remain committed, including Sen. of , who recently said eliminating private insurance was an "urgent goal."

The scandals unraveling the Democratic Party in have obscured the fact that the controversy started because someone was appalled by Gov. defense of legislation that seemed to support the right to terminate the life of delivered babies.

There's ample room to criticize the way Trump has handled immigration and shoved all his chips into the center of the table for his wall, but some of the rhetoric about immigration -- the need to abolish , for example -- hasn't made them appear like a reasonable alternative.

A host of other story lines, largely ignored or downplayed by the mainstream media, have caught the attention of conservatives nonetheless, from increasingly open hostility to Catholic judicial nominees to greater tolerance for anti-Semitic rhetoric.

House Speaker (D-Calif.) seems to grasp that it's in her party's interest not to go overboard in response to Trump, but collectively it's as if the think the savvy political response to the radicalism they see in Trumpism is an alternatively radical agenda. The problem is that Trump's actual agenda (so far) hasn't been as radical as the disorientating nature of his norm-defying personal conduct and obvious contempt for institutional safeguards has led many liberals to believe.

In many respects the parties are mirroring each other, as the incentive structure on both sides is geared toward the extremes. Politics is no longer about capturing the center where most voters gravitate, but revving up the ranks of the most passionate. Faced with that reality, enough Americans may hold their noses and vote against the devil they don't know.