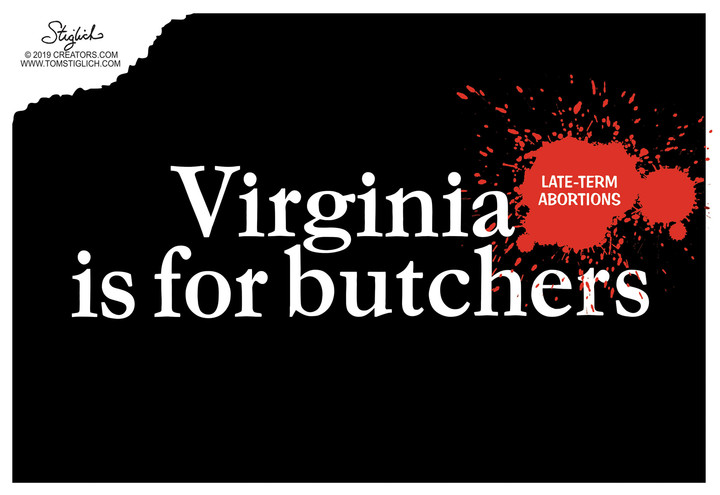 A bill proposed by state Delegate -- ultimately voted down -- would have made certain forms of baby killing legal. The proposed law would have reduced the number of doctors required to sign a baby's death warrant and expanded the number of excuses for why a mother could choose at the last minute to ask for one. A video of Tran explaining how, under her bill, a fully developed baby could be terminated even during labor, ignited a burning controversy.

The flames shed light on movements in other states, particularly and , to make abortion legal past the point of viability, meaning past the point where the baby could live independent of its mother.

Gov. threw gasoline on the fire when he defended the legislation clumsily (to put it charitably), making it sound like he believed a viable baby could be fully delivered before the doctor and mother decided whether it should be permitted to live.

Many in the mainstream media -- who often treat conservative reactions to an outrage as the "real" story rather than the outrageous thing itself -- have been falling over each other to demonstrate how much more complicated and nuanced this issue is.

And they have a point -- or points. Tran now says she misspoke and acknowledged that the way she had described the law would have run afoul of anti-infanticide laws.

It's also true that the number of women who will bring a baby fully to term only to terminate it during the 40th week is indeed extremely small.

But it is only small in comparison to the total number of abortions in this country. According to the respected (and pro-abortion rights) , there were some 926,000 induced abortions in 2014 (the most recent year for which data is available), and 1.3 percent -- or roughly 12,000 -- of those were after the 20th week.

Meanwhile, it's not necessarily true, as Northam has tried to argue, that most women who seek late-term abortions do so solely for compelling health reasons or in response to a severe fetal deformity. According to a 2013 Guttmacher study, "most women seeking later terminations are not doing so for reasons of fetal anomaly or life endangerment."

If you don't think late-term, post-viability abortions are morally troubling, you might want to ask yourself why we are only one of seven countries in the world that allow elective abortions after 20 weeks. It's unclear how many countries allow abortion at 40 weeks, mid-delivery, but it's possible that the and would be the only members of that club.

I'm all in favor debating such details, but what bothers me about these abortion controversies is the way utilitarian arguments are given the presumption of moral superiority. In almost every other sphere of debate where progressives claim the moral high ground, they are categorical. "If it saves just one life, it's worth it," they say about gun control, health-care reform, police abuse, etc.

Imagine if I were to argue that since lynchings are so rare, we don't really need strict laws against lynching. Infanticide, like racism, murder and rape, is a moral category. It's not less evil if it's rare. It is rare -- thank G od -- because we've agreed to treat it as evil.

Many people have trouble being 100 percent certain that a fertilized egg or a blastocyst is a human being, but vanishingly few of us dispute that a delivered baby outside the womb is a human being. And it is not a large leap in logic or morality to believe that a partially delivered viable baby is a human being. If you want to argue that the status of the baby gets murkier as you wind the clock backward, fine. But that's a different argument. It's not murky at 40 weeks.

In debates over the death penalty, there is one thing virtually everyone agrees upon: It's profoundly wrong to execute the innocent. Our criminal justice system is rightly crammed with all manner of checks to minimize the risk of a terrible mistake. Well, a viable baby is surely innocent, too. And yet, among abortion rights maximalists, it is considered the morally sophisticated position to remove as many checks as possible from preventing infanticide. If you think it's worth tolerating a certain number of baby killings to protect abortion rights, you should say so. But please don't pretend the moral ground you're standing on is very high.