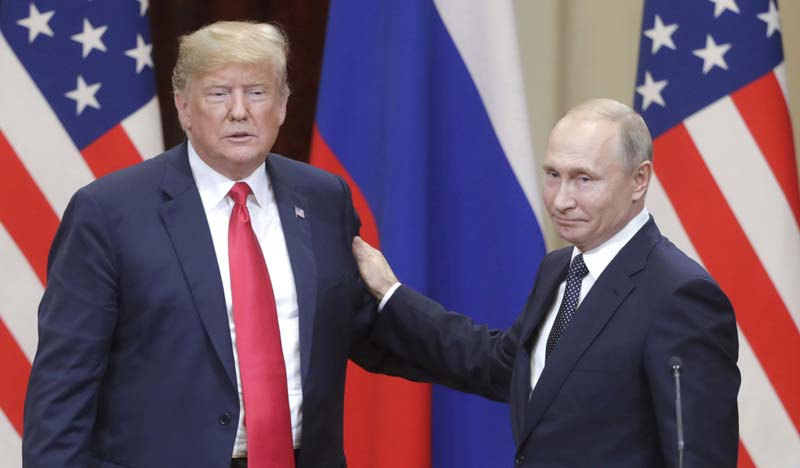 SEE, THIS SNAP PROVES IT! An asset and his handler? Abaca Press

Before we get to the question of whether the president of is a Russian asset, let's consider another question: When was the last time a popular and contentious conspiracy theory turned out to be true? Not a little true, but, like, really true?

It does happen. was right about being a Soviet spy. The government really did put poison in legal alcohol during Prohibition.

But even when conspiracy theorists earn the right to say "We told you so," the actual reality often falls short of the mark. The motives of the conspirators aren't as sinister as claimed, or the plot is better explained by incompetence than malevolence, or the scope of the conspiracy itself isn't nearly as vast as suspected.

This has always been my problem with the most extreme versions of the Russian collusion theories. The British former journalist and politician offers an extreme version. Among her claims: had my late friend murdered so that former consigliere could take over Breitbart's eponymous website; Russian intelligence planted emails on former Rep. laptop; pretty much the whole of the leadership is in cahoots with the Kremlin.

I have a similar problem with the Deep State theories that have bounced around the Trumpian right: problems are all the result of the fiendish doings of a vast "globalist" conspiracy.


"The central premise," Infowars nutter writes in his book "Killing the Deep State," "is that is the target of a coup d'Ă©tat being undertaken by the Deep State, including the CIA, , and other intelligence agencies that maintain a commitment to a globalist New World Order." The Deep State hates Trump, the argument goes, because his victory meant it could no longer "continue running the international drug trade while supporting the military-industrial complex in a policy of perpetual war."

Obviously, most sane people on either side of the Trumpian divide reject the cartoonish versions of their own positions. But similarities endure.

Pattern recognition is one of humanity's great evolutionary advantages. It is the foundation for trial and error, the scientific method and reason itself. But it can also mislead us. Most conspiracy theories involve motivated reasoning in which we deduce backward from a result, cherry-picking which dots to connect to fit a preexisting idea.

The people who insist that Trump colluded with start with the explanation -- the election was "stolen" by -- and then pluck facts to fit. And there are many such facts.

But, as Trump defenders and even Trump himself will quickly note, there are many contrary facts as well. His energy policies, for example, are deeply contrary to interests.

The bombshell New York Times report that the FBI opened an investigation into whether Trump was a Russian asset strikes me as simultaneously understandable and outrageous. Trump's behavior in 2016 and early 2017 was enough to overload the pattern-recognition software of anyone not already committed to Trump's innocence at all costs, particularly if you were both reading the news and receiving raw, and occasionally flawed, intelligence such as the Steele dossier.

Trump's disastrous hiring of actual Kremlin stooges and cronies, his praise of Putin, his lies about business dealings with , his public beseeching of the Kremlin to release Clinton's emails, his campaign's infamous meeting at with an actual Russian agent, not to mention his firing of the FBI director and his comments to Russian officials in the : One doesn't even need to resort to Deep State theories to understand why the FBI would be concerned.

But that doesn't necessarily make Trump a Manchurian president either.

He or his campaign may or may not have colluded with . might have cut corners to "get" him. Still, rather than elaborate conspiracies, it's far more likely that ad hoc decisions were made in the response to ad hoc actions by a candidate who thought he was going to lose and, later, by a president who didn't know what he was doing.

was right when he predicted in 2015 that "chaos candidate" Trump would be a "chaos president." The just published a list, "Unthinkable: 50 Moments that Define an Improbable Presidency," and what comes through most is that Trump's glandular, impulsive and often vindictive character is the only reliable signal in the noise that is his presidency. Any theory that doesn't take this into account is not likely to pan out.