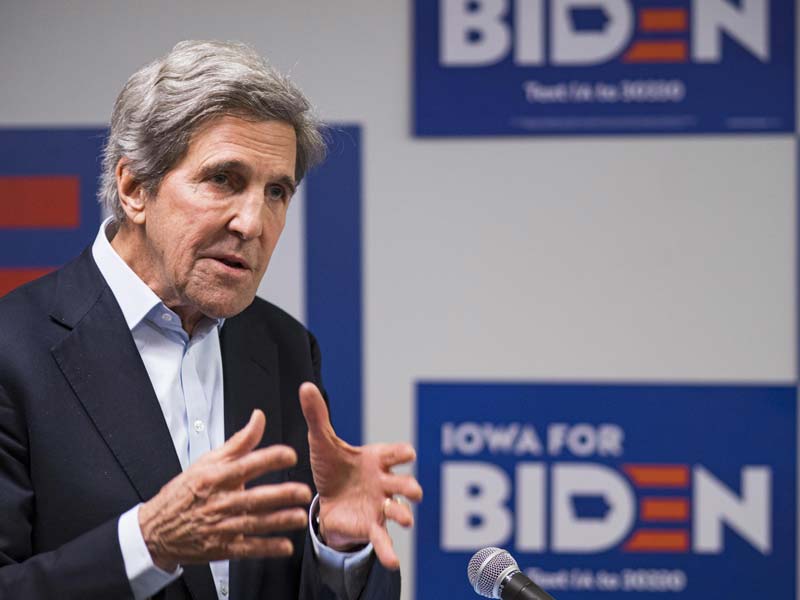 As of this writing, the Democratic presidential contest looks very fluid, with four candidates bunched up in and . But the sudden relevance of foreign policy, thanks to the confrontation with , has made it look more and more like a two-person race between and .

Both candidates think the issue helps them, and they're probably right. Biden's foreign policy experience and comparative hawkishness reinforce support from moderate voters, and Sanders' long record of dovishness helps him among more progressive voters. Both candidates are trying to use the issue to freeze out their nearest competitors, and .

If it does become a two-way contest, we could be shaping up for a kind of replay of the 2004 Democratic battle between former Sen. and former Gov. . And that might be good for .

Biden's ace in the hole is his support from voters, which hinges on their belief that Biden is the most likely candidate to defeat . A new Washington Post-Ipsos poll has Biden capturing 48 percent of black votes, and 57 percent of black voters say the thing they're looking for most in a candidate is the ability to beat Trump.

Only a third say their main consideration is how closely a candidate aligns with them on the issues. These "issues" voters skew younger, which might partially explain why Sanders comes in second among black voters with 20 percent.

The whole dynamic is somewhat reminiscent of the 2004 primaries. Kerry was the establishment candidate, Dean was the firebrand outsider with a lot of support from young progressives.

It's largely forgotten now, but Kerry won the early contests not because voters liked him best, but because they thought other voters would prefer him down the road.

"There were a lot of people out there who really liked message of standing up to the and , and his strong antiwar stance," , the chairman in 2004, told , "but they ultimately felt that was close enough to those principles and was more electable in 2004. They chose their head over their heart."

In , Kerry won by 12 points. Kerry beat Dean 4-to-1 among voters whose top motivation was selecting a candidate who could "defeat in November." Kerry and Dean were even among voters who picked their candidate because "he agrees with you on the major issues." And Kerry's early successes helped fuel the electability argument in later contests.

The prevailing logic of the "dated Dean, married Kerry" voters was that given the war in and the war on terror generally, Kerry's status as a decorated veteran would nullify Bush's advantage as a wartime president. That's why Kerry showed up at the announcing he was "reporting for duty" with a smart salute. Of course, Kerry's military record later came under scrutiny, as did his antiwar activism, both of which undercut the advantage voters assumed his war record would give him.

Biden is positioned somewhat differently from Kerry -- he's more likable, if wackier, for starters. And Sanders has a much more robust organization than Dean had. But the similarities are real. It raises an interesting question: What if voters at the time had a better understanding of Kerry's weaknesses as a "war hero" candidate -- the main rationale for his electability claims?

Clearly, the (the real Trump campaign headquarters) is trying to test the question by muddying up Biden before the first primary votes are even cast. So far it's not working very well.

But what if Biden stumbles?

The problem with campaigning on electability is that it's a brittle rationale for a candidacy compared with organic support from the grassroots. Sanders had a heart attack (!), yet he's gained support since then. It's hard to imagine Biden's candidacy surviving a similar setback or a major stumble. If Biden loses in and -- a very real possibility -- will pragmatic voters, including Biden's firewall of black voters, stand by him?

If they don't, that would be billionaire opportunity. Sanders' support is deep, but it isn't wide. Many Democratic insiders and voters believe that the avowed socialist would lose to Trump. Whether that's true matters less than the belief. Bloomberg's "break glass in case of emergency" candidacy could do surprisingly well on Super Tuesday (and that's clearly Bloomberg's plan).

Of course, it's not obvious that Bloomberg could seize the nomination or beat Trump. Having Sanders' socialist dreams dashed by one of the very plutocrats he detests could divide the and help fuel the Democratic nightmare of a brokered convention. But for those of us with no favorites in this race, it would be fun to watch.