The problem with Romney nostalgia 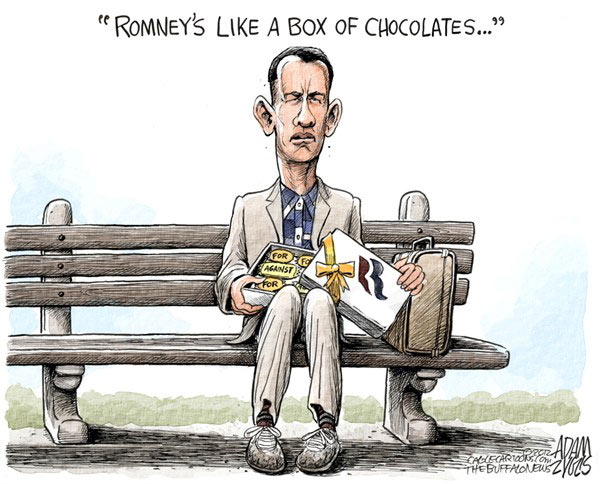 In 2007, when President Obama announced that he was running for president, he did it in , to highlight his supposed connection to . He brought in his biggest fans to cheer him on. When announced in 1999, he did it in . The Bush campaign, likewise, brought in a big crowd of supporters. announced in Patriot's Point, S.C., in 2003, amid a sea of American flags, war veterans and an aircraft carrier in the background.

And where was when he announced on Friday that he was thinking of another run in 2016? He, too, was talking to his base: about 30 deep-pocketed donors in . "Tell your friends," he said.

You know how superhero flicks often have an extra scene after the credits to hint at what the sequel will be like? Well, this would be the perfect end to the movie "Romney 2012."

The problem is that "Romney for president" is now an art house film thinking it's a blockbuster franchise and that there's a huge market for another sequel. There's not.

Don't get me wrong. I wanted him to win in 2012, and I think voters made a serious mistake not following my advice. I've met the man, and I know several of his friends and former staffers. He inspires great loyalty in them, and that speaks well of him. He's an honorable, capable and decent person.

But I know lots of honorable, capable and decent people. I don't want them to run for president either.

Romney's support outside his personal network of donors is largely made up of people who lament that he lost the last time around. That -- and name recognition -- is probably the biggest explanation for why he polls so well. The last poll to include him among the contenders (, ), had him leading the field at 19 percent, with second at 10 percent.

But the only poll you need to know about was the exit poll of voters in 2012, which asked, "Which one of these four candidate qualities mattered most in deciding how you voted for president?"

That may be a totally unfair impression of the man, but it is a sincere one. This was not a verdict on his policy positions, which were fairly conventional.

As I've been saying for years, Romney has an authentic inauthenticity problem; he seems fake, but that's actually him. Not only does he look like the picture that came with the frame, he talks like a 1920s college president. Maybe it speaks ill of America that voters put so much stock in empathy and authenticity, but they do.

It's no secret that Romney took the loss hard. But there would be a great irony in thinking that the 59 million votes he garnered in 2012 indicate a base for him to build off of in 2016. Most of those voters voted at least as much against Obama as they did for Romney. And that's exactly how the Romney campaign wanted it. "Our whole campaign is premised on the idea that this is a referendum on Obama," Romney strategist admitted to the . Well, Romney nostalgia, too, is largely a referendum on Obama.

But Obama won't be on the ticket in 2016. And the idea that a one-term governor, who hired to help design his health-care plan, is just what the Republicans need to run against is odd, particularly when the has a much more talented, and fresher, field than it did in 2012.

There's chatter that Romney is just trying to keep Bush from locking up all the big donors and preventing a Bush coronation. If so, I'm sympathetic. But the sympathy ends the day Romney announces. Then, he's just another contender.