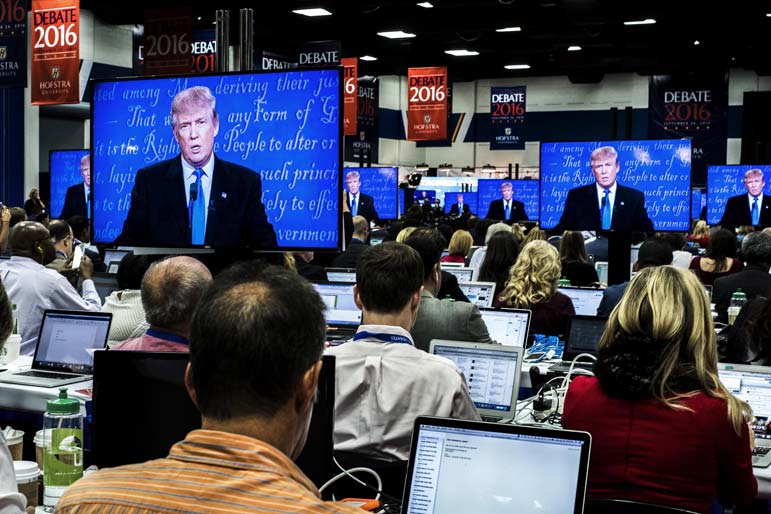 The crass tape of Donald Trump speaking in vulgar terms about women and what he has supposedly done to them worked, ironically, in Trump's favor during the second debate. It meant that more people tuned in for this debate than otherwise would have and saw Trump's vastly superior performance compared with that of the first debate

Trump promptly apologized and admitted to being embarrassed by the things he said, but he attributed his filthy remarks to "locker room" banter. When asked, he pointedly denied doing the things he bragged he did, including groping women as he'd boasted on the tape. Assuming no woman comes forward to dispute his denial — and, so far, no one has — the air pretty much escaped from this "bombshell" within the first few minutes of the debate.

But the "Trump tape" and his defense allowed Trump to finally launch a full-throated attack on not only Bill Clinton's sexual behavior and alleged sex crimes but also on how Hillary Clinton besmirched, belittled and discredited her husband's accusers. In defending himself, Trump went after both Bill and Hillary without having to reach for the issue and thus be accused of dragging the election down a side road. Once the tape came to light, Bill and Hillary's behavior became fair game, like it or not, tawdry or not. And it got tense and sometimes downright nasty.

Trump brought three of Bill Clinton's accusers — Paula Jones, Kathleen Willey and Juanita Broaddrick. Right before the debate, Breitbart News aired an interview with the three women and a separate video of a trembling Broaddrick, who tearfully recounted her alleged rape by Bill Clinton and Hillary's alleged verbal threat to Broaddrick to keep quiet about it. Powerful stuff. Reportedly, Trump wanted the three accusers to sit near Hillary Clinton during the debate, but the debate commission nixed it.

Trump also brought, and referred to during the debate, the then-12-year-old alleged rape survivor, Kathy Shelton, whose alleged rapist Hillary Clinton represented as a young lawyer in 1975. Shelton claims she still bears the psychological scars, not only from the rape but also from Clinton's trashing of her character. Clinton got the rape charges reduced to "unlawful fondling of a child," which only carried a five-year sentence. The judge suspended four years and allowed two months credit for time already served against the final year.

Trump also brought up that Clinton laughingly bragged about her successful defense strategy — referring to the existence of an audiotape from the mid-1980s where Clinton laughed when discussing the crime lab and the accidental destruction of DNA evidence that could have tied her client to the crime of rape. She also said, "I had (my client) take a polygraph, which he passed," and laughing, Clinton added, "which forever destroyed my faith in polygraphs." But now that this decades-old case has been brought up on this big stage, it will be hard, even for the largely pro-Clinton media, to avoid questioning her about it.

And this was just the first 30 minutes of the town-hall-style debate.

Trump clearly did his homework and, unlike the first debate, came prepared. He gave a better defense of why he hasn't turned over his tax returns and went on the offense, bringing up nearly every issue omitted or only briefly brought up the first time, most notably Obamacare; illegal immigration; Hillary Clinton's refusal to say "radical Islam"; and that top Clinton aide and confidant Sidney Blumenthal pushed what Clinton calls the "racist lie" that Obama was born in Kenya.

Trump, this time, went after Clinton for calling his supporters a "basket of deplorables," describing this as an example of the "hate" in Clinton's heart. Trump also brought the topic back to the economy and the tepid recovery.

They entered the stage without shaking hands, but did so when the debate concluded, possibly because the last question required them to name one good quality of their opponent. Clinton answered that Trump has good children, a reflection, she said, of their father. Trump described Clinton as a "fighter" who "doesn't quit."

A side note: In a discussion about the immigration of Muslims to America, Clinton cited Muhammad Ali as an example of Muslims' contributions to our society. In a recent email to me, Tim Shanahan, a friend of Ali's for 40 years and author of a new Ali biography, said that in August 2015, he asked Ali whom he supported for president. Ali responded, "Trump." Shanahan asked, "Why?" Ali said, "Controversy. He ain't afraid of it."

It's now on to debate No. 3. Recent polls — taken after the revelation of the Trump tape but before the second debate — show Clinton's lead widening. And early post-debate polls show that many believe Clinton, not Trump, won the second debate. But since the second debate, another batch of WikiLeaks-hacked emails, to and from Clinton campaign Chair John Podesta, appear to show more collusion between the Clinton campaign and the media than even the most cynical could've imagined.

The election is less than a month away. Stay tuned.