Will Stephen Colbert Give Liberals the Ted Cruz Treatment? 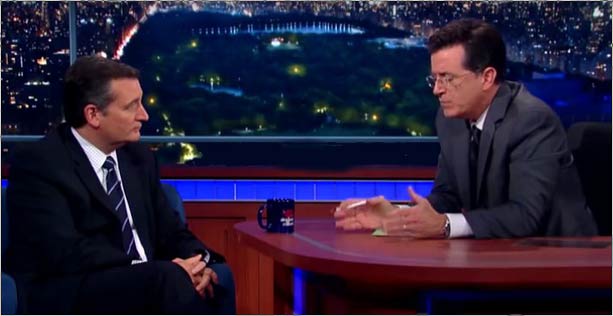 "The Late Show" host, Stephen Colbert, in an interview with Sen. Ted Cruz, R-Tex., said conservative icon President Ronald Reagan actually raised taxes and signed an amnesty bill. Gotcha! To the delight of his audience, Colbert argued that if Reagan could "compromise" by raising taxes and granting amnesty, why can't the intransigent Republican conservatives of today do so?

For whatever reason, the normally nimble Cruz failed to educate Colbert and his audience that Reagan came to regret the tax hikes of 1982 — the ones that the left reminds us were, as a percentage of GDP, the largest in U.S. peacetime history.

Congress promised $3 in budget cuts for $1 in tax hikes when Reagan signed the Tax Equity and Fiscal Responsibility Act of 1982. A reluctant Reagan signed, agreeing to "a limited loophole-closing tax increase to raise more than $98.3 billion over three years in return for ... agreement to cut spending by $280 billion during the same period." As Reagan later wrote, "The Democrats reneged on their pledge and we never got those cuts." Reagan's former attorney general Ed Meese later called the deal a "debacle."

As to the amnesty deal, Congress promised two things: The borders would be secured, and employers who hire illegal aliens would be prosecuted. Neither was done. Twenty years later, a remorseful Meese wrote: "The 1986 (amnesty) act did not solve our illegal immigration problem. ... From the start, there was widespread document fraud by applicants. Unsurprisingly, the number of people applying for amnesty far exceeded projections. ... Illegal immigration returned to normal levels and continued unabated. Ultimately, some 2.7 million people were granted amnesty, and many who were not stayed anyway, forming the nucleus of today's unauthorized population."

Will Colbert, when he interviews lefties, do the same thing he did to Cruz? Will he use liberal icons to scold leftwing quests about their unwillingness to "compromise"? After all, some big-name Democrats took positions that would be heretical to today's pro-taxes/anti-gun/pro-public-sector-union/pro-affirmative action/pro-choice/pro-big-government/pro-welfare-state lefties:

Guns: Kennedy said, "Although it is extremely unlikely that the fears of governmental tyranny which gave rise to the Second Amendment will ever be a major danger to our nation, the Amendment still remains an important declaration of our basic civilian-military relationships, in which every citizen must be ready to participate in the defense of his country. For that reason I believe the Second Amendment will always be important."

Unions: Franklin Delano Roosevelt opposed public sector unions, today a major supporter of the Democratic Party. Roosevelt wrote: "All Government employees should realize that the process of collective bargaining, as usually understood, cannot be transplanted into the public service. It has its distinct and insurmountable limitations when applied to public personnel management."

Welfare: Roosevelt, the author of the New Deal, expected welfare to be temporary and called long-term welfare a "narcotic": "The lessons of history, confirmed by the evidence immediately before me, show conclusively that continued dependence upon relief induces a spiritual disintegration fundamentally destructive to the national fiber. To dole our relief in this way is to administer a narcotic, a subtle destroyer of the human spirit. It is inimical to the dictates of a sound policy. It is in violation of the traditions of America. Work must be found for able-bodied but destitute workers. The federal government must and shall quit this business of relief."

Abortion: Former President Jimmy Carter said his party never should have become the party of abortion. "I have never believed that Jesus would be in favor of abortion unless it was the result of rape or incest, or the mother's life was in danger. That's been the only conflict I've had in my career between political duties and Christian faith."

Health care: George McGovern, the Democratic Party's 1972 presidential nominee, wanted to loosen restrictions. In 2008, he wrote: "Under the guise of protecting us from ourselves, the right and the left are becoming ever more aggressive in regulating behavior. ... Buying health insurance on the Internet and across state lines, where less expensive plans may be available, is prohibited."

Regulation: McGovern blamed excessive regulation for the bankruptcy of his post-senate small hotel and restaurant, the Stratford Inn: "Many businesses, especially small independents such as the Stratford Inn, simply can't pass such costs on to their customers and remain competitive or profitable."

Will Colbert cite JFK and other Democrats to urge Hillary Clinton or Bernie Sanders to "compromise"?