Trump at a Black Detroit Church: What He Should Have Said 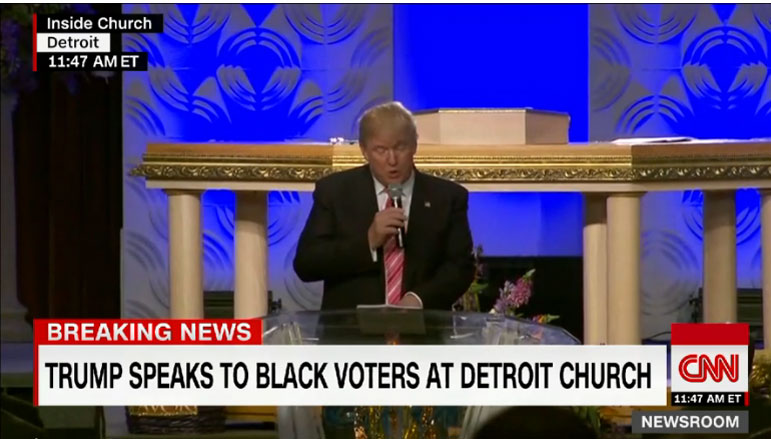 Here's what Donald Trump, at the black church in Detroit, should have said:

"I indict the Democratic Party for creating family-destroying dependency; deepening unemployment with minimum-wage laws; burdening job creators with excessive taxes and regulations; increasing crime by falsely maligning the police — the overwhelming majority of whom are hardworking, honest public servants of all colors; and for stoking anger by playing the race card for votes.

"I want to remind you that the Democratic Party is the party of slavery and Jim Crow, and that, as a percentage of the party, more Republicans voted for the passage of the hallmark Civil Rights Act of 1964 than did Democrats.

"I refute the liberal lie that there was a 'big switch' in which racist Southern Democrats allegedly flocked en masse to the Republican Party — due to their opposition to integration.

"No, nearly all of the racist Democrats, who voted against the 1964 Civil Rights Bill, died Democrats. Alabama Gov. George Wallace, who stood in front of the school door and said, 'Segregation now, segregation tomorrow, segregation forever,' died a Democrat. West Virginia Sen. Robert Byrd, who was not only a member of the Ku Klux Klan but a recruiter for the KKK, died a Democrat. "According to 2008 exit polls, 65 percent of those who voted for Obama gave the economy as their No. 1 concern. The next-highest, at about 10 percent, was the Iraq War. What did black voter get for their 95 percent Democratic vote? By most measures, things are worse!

"Black poverty is up; black net worth is down; black home ownership — down; black home equity — down; the 'wealth gap' between white households and black households hasn't been this wide in 26 years; and by 2014 the labor force participation rate — the percentage of black males working or seeking work — hit the lowest rate since the government's been keeping that statistic.

"Reagan lowered taxes. Obama raised them. Reagan lessened regulations. Obama piled them on. Reagan slowed down the rate of domestic spending — leaving more money in the pockets of individuals to save, invest or donate as they please, not as some government bureaucrat dictated. Obama dramatically increased government spending.

"Why is lowering taxes a good policy when a lot of working people and poor people don't even pay any federal taxes? Because the more money left in the pockets of job creators, the more jobs they can and will create.

"Here's my immediate plan: Lower taxes on job creators; lessen regulations that require people to get costly, time-consuming and unnecessary occupational licenses for so many jobs and careers; allow school vouchers so urban parents, if they choose, can take their kids out of an underperforming government school that Democrats force them to attend; and stop illegal immigration that takes jobs away from — and puts downward pressure on the wages of — inner-city workers.

"Long term, we need to rethink the government-provided, no-questions-asked welfare that has produced so many fatherless homes. We need to ask whether government — as opposed to nonprofits, community charities and churches like yours — should primarily be responsible for handling the needs of the needy.

"Again, that was 20 years ago. I believe most people here would have to say, after the election and reelection America's first black president, racism is certainly less potent now than it was 20 years ago. America certainly isn't perfect. Racism has by no means been eliminated, but the issue today is empowerment.

"Thank you for allowing me to come to your beautiful church to speak. May God bless you, and may God continue to bless America."